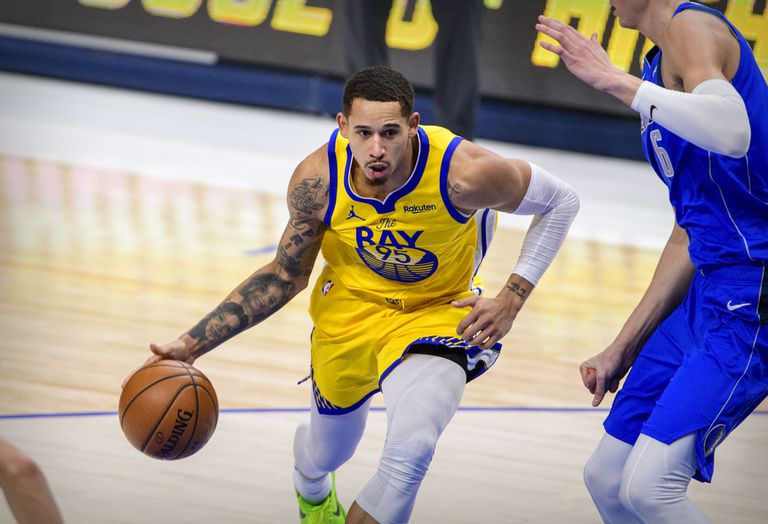 Mexico’s Juan Toscano during a game between the Warriors and the Mavericks, on February 4.Jerome Miron / .

The Warriors have a luxury intern among their ranks. His name is Juan Toscano (Oakland, California, 27 years old), a player clinging to one idea: playing on the NBA courts. Toscano, of a Mexican mother and a Puerto Rican father, gave up his role as a star in Mexico to earn a chance in the elite. His moment to shine had to wait after bitter episodes. Today he celebrates like a wild fan the passes and the triples that his teammate Stephen Curry makes. It is happiness in its purest form.

Toscano’s mother’s family lived in Chavinda, in the State of Michoacán, the leading entity in the production of avocados in Mexico. Toscano grew up as an American, but whenever he looked in the mirror he felt Mexican. One of his school teachers was the wife of Alvin Attles, one of the Golden State Warriors’ historical players, and she invited him to basketball camp. There he got hooked. He came to Marquette University in Milwaukee in 2011. He was one step away from making it to the NBA, but no recruiter was interested in his talent as a forward. “When I saw my dreams fade I was sad and upset. It was a hit of reality, “said the Mexican in an interview.

Spanish Sergio Valdeolmillos came to the rescue. The strategist, who revitalized basketball in Mexico, threw him a lifeline: an opportunity to play the pre-Olympic tournament with the Mexican team. Toscano, with his dream truncated in the US, turned to El Tri. “Every day the soul was left on the court. It gave us an improvement bonus in each training session, ”said Ramón Díaz, Valdeolmillos’ assistant for NBA Global. Toscano received the opportunity to play as a professional for the Soles de Mexicali, one of the teams of the Mexican Basketball League, in the north of the country. After a fleeting step, he was hired by Fuerza Regia, where another Spaniard enhanced his talent, Paco Olmos, and won the league twice (2016-17 and 2018-19).

Toscano wanted to make the leap. In 2017 he did the preseason with UCAM Murcia of the Endesa League, but was not selected to stay with the team. He also played in Venezuela and Argentina, but the shadow of his frustrated yearning hung over him. In 2019, he was finally able to come up with something like his dream: the NBA development league. He earned a spot with the Santa Cruz Warriors, the Golden State affiliate. 15 minutes before the start of the League media day, the team informed Toscano that he would be part of the squad. His performance and disposition led him to the Summer League, a tournament organized by the NBA to test and recruit players. It wasn’t enough and he had to play another year on the alternate team.

In February 2020, coach Steve Kerr gave Toscano the opportunity to make his NBA debut at age 26 in a game against LeBron James’ Lakers. It was the personal victory of the Mexican with 19 minutes on the floor. “He has a bit of everything: he’s a good passer, rebounder. He understands the game and he fits. With him everything flows quite well, ”said Kerr. The pandemic ended the Warriors campaign who did not participate in the NBA resumption in the bubble at Disney. Toscano was able to play 13 games. Last December, Golden State cut the Mexican from the team.

A few days after being sidelined from the team, Toscano was given one more chance. They offered him a contract called two ways (two ways) in which he is tied to the Warriors affiliate team. Toscano started the 2021 season strong with 15 games played, more than in his first year, and with an average of 6.9 points each game. “I am a huge fan of Juan. It’s a big part of our team and when you see this issue [del contrato] I will be in favor [de que se quede]Kerr said.

Stephen Curry has raised the challenge to Toscano. “We were in practice and I had an open shot, but I didn’t take it. He [Curry] He came up to me and said, ‘Throw it away, I don’t care if you fail. If you don’t throw it away, you’re going to do worse than better, ”Toscano recalled that advice in an interview with El Heraldo. “I am not doing it for money. I don’t care if I’m on a two-way deal or making two million dollars a year. I wake up every day for the love of this sport ”, said the athlete a few days ago. Juan Toscano’s dream is still intact.