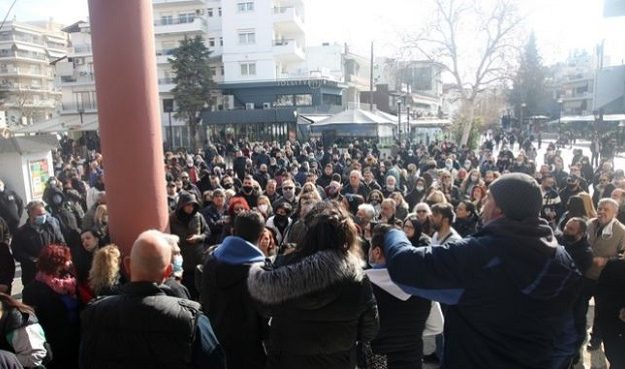 Strong protests took place in Evosmos, Thessaloniki, as the area was put under severe lockdown due to the appearance of cases of the African mutation.

Residents of the Municipality of Evosmos Kordelios gathered and marched, reacting to the restraining measures implemented in the area since Saturday morning (20/2).

Residents object to the manner and the reasons that led to it, estimating that there was no reason for stricter measures. In fact, they signed a resolution with their demands, which they will deliver on Monday (22/2) to the mayor.

The rally was followed by a march in the main streets of the municipality, which started from Evosmos square and ended in Kordelio.

“There are 12 cases of South African mutation within our municipality, this is the reason why the hard lockdown took place. “Epidemiologically we are lower, we have fewer cases, but there is an increase in the new executive that must be addressed at the beginning,” said the mayor, Kleanthis Mandalianos.

In addition, he complained that the municipal authority should have been informed more quickly about the cases and the epidemiological situation, while regarding the reactions from citizens and businessmen, he added that “people are irritated and upset and our trade association he complained, because it is before the catastrophe “.