HOME • GR (Greek) • Turkish Airlines Euroleague • CRAZY FOR THE BET: They accuse Rivers who deliberately missed a shot in the end: “You owe us” (Video) 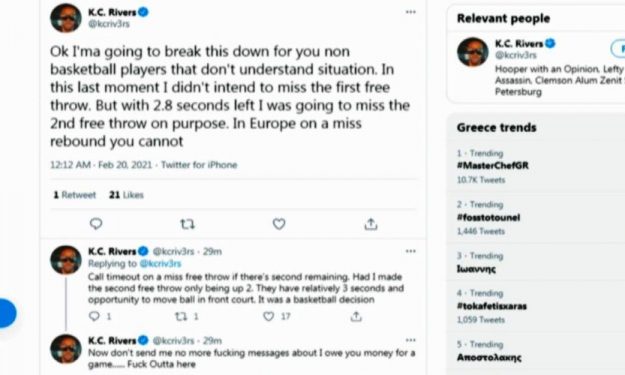 KC Rivers missed two shots just before the final of Zenit’s dramatic match with the Red Star in Belgrade (2.8 “to be precise before the horn was heard), the second deliberately to roll the timer and immediately a” war “broke out. on Twitter, accusing gamblers of κέρ missing winnings.

“You owe us” some even wrote in French, and even the experienced ace of Zenit was forced to respond indignant at the unjust attack he received, since he obviously did not think at that moment who was betting and what he would gain if he scored one or two shots.

Rivers missed the first shot with the score at +1 for his team, so he considered it right to lose the second so that as soon as the ball hits the hoop, the timer starts to “run” from 2.8 “. Indeed, the Red Star did not manage to make a decent attack and Zenit got the big and valuable for their qualification victory for the playoffs.

But some people obviously do not understand such things and Rivers was forced to give explanations, writing in a post on twitter in response:

“In these final moments of the match, I had no intention of missing the first shot. “with 2.8” remaining, I really lost the second one with intention, because in Europe the timer for time out does not stop if the game continues “.

Something we all know and obviously the “gamblers” know it too but Rivers also answered in French after they asked him for their money! Nothing else;