The first machine to harvest an essential human resource in another world.

The first to store samples from a planet that will one day be studied by scientists here on Earth.

And the first one sent to directly search for signs of past extraterrestrial life.

NASA hasn’t given a spacecraft such a monumental task since the 1970s, when the Viking mission was sent to the Red Planet to search for evidence of live microbes. That effort raised more questions than answers.

In the years since, the space institution has instead focused on intermediate and achievable goals, such as finding signs of water or organic molecules that lead to life. The question is whether Perseverance, the star of NASA’s Mars 2020 mission, is truly equipped to begin tackling this existential mystery: Are we alone in the universe?

“This is the culmination of more than 50 years of exploring Mars,” said Briony Horgan, a planetary geologist at Purdue University and a member of the Mars 2020 science team. “We are using all of that data and work that we have done over decades to try to really answer that question. “

Whether the answer is yes or no, the clues collected by the sample storage robot could help shape the future of space exploration.

Perseverance’s trip is one-way and was scheduled to end on Thursday around 12:55 pm PST. Scientifically, it is continuing the work of Viking 1 and 2, which arrived on Mars in 1976. The twin landers were sent for the express purpose of searching for evidence of life. They found intriguing chemical activity in the planet’s soil, but nothing conclusive.

“We didn’t understand enough about Mars to interpret that data,” Horgan said. “We still don’t quite know what Viking found.”

Later missions took the scientific journey one step at a time. NASA returned to the Martian surface in 1997 with the tiny Sojourner rover. Then came the solar-powered twins Spirit and Opportunity, tasked with finding signs of water on the planet’s surface. But water alone does not make life.

Curiosity landed on Mars in 2012 to search for chemical cocktails that, along with water, could provide hospitable environments for life forms of the past. Even that did not prove that living things existed there.

With Perseverance, mission scientists at NASA’s Jet Propulsion Laboratory at La Cañada Flintridge and elsewhere are searching for clues of life from the past, a goal as ambitious as it is challenging.

Although Mars is dusty and dry today, scientists think it was warmer, wetter, and collectively more Earth-like more than 3.5 billion years ago. Using its drill and laboratory instruments, Curiosity revealed that its base of operations in Gale Crater was once an aquatic place with the right organic ingredients to support life.

But finding signs of ancient life is much more difficult. It requires looking for the kinds of patterns that beings leave on Earth. That means researching certain structures and textures, not just the right raw materials.

“This is how we build a case for biological signatures,” said Kathryn Stack Morgan, JPL’s project associate scientist for the $ 2.4 billion Mars 2020 mission. “That is what we do on Earth.”

If there’s anywhere a rover robot should look for such biological signatures, it’s probably Jezero crater. Located on the western edge of a flat plain north of the equator of Mars, this 28-mile-wide area has all the hallmarks of a vanished lake, including an ancient delta along one edge.

Delta is typically formed when flowing water (from, say, a river) hits a body of water (such as a lake) and deposits clay minerals carried from the surrounding area. Theoretically, if the microbes from Mars made their home on Jezero when the lake was full, their remains would now be found in sediment on the lake bed or along the shore. 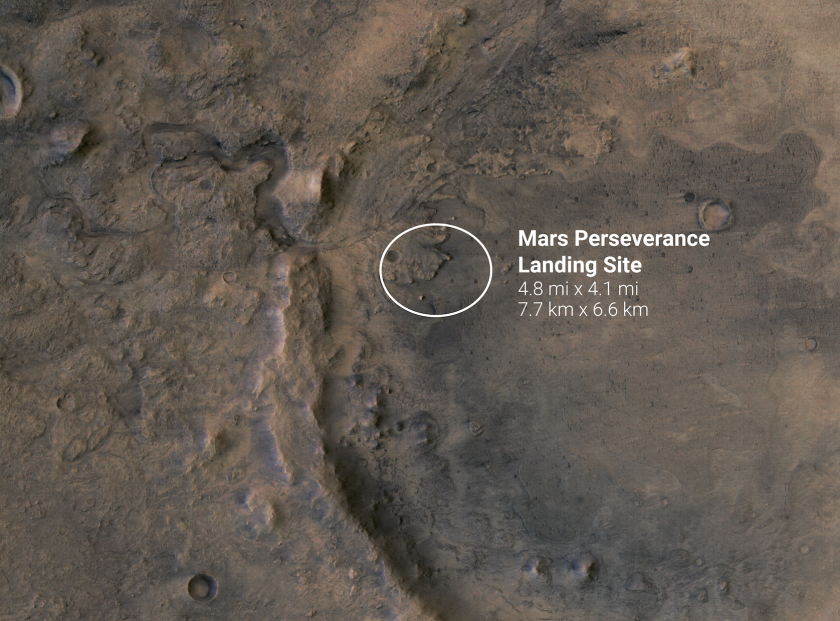 Jezero crater seen by the Mars Express orbiter. The white circle indicates the location where NASA’s Perseverance robotic rover is expected to land

This is why when scientists see the delta in Jezero, they salivate. But when the engineers see the crater, they start to sweat.

“It’s a really dangerous landing site,” explained Allen Chen, who leads the Mars 2020 entry, descent and landing team at JPL, where the robotic rover was designed and built. There are rocky fields, crags, treacherous sand dunes and sharp cliffs. “There are dangers everywhere”.

For years, in fact, Jezero was too dangerous to even seriously consider. But innovations in landing technology changed that, Chen said.

Now, Perseverance will be armed with Range Trigger to calculate the spacecraft’s distance from its landing target and adjust the parachute opening time accordingly. There is also terrain relative navigation, which allows the descending spacecraft to determine its location and choose the safest landing target it can reach.

These automated technologies are key, because Perseverance will need to make decisions for itself. Once on Mars, it takes the spacecraft more than 22 minutes to send a message to its JPL controllers and receive a response. 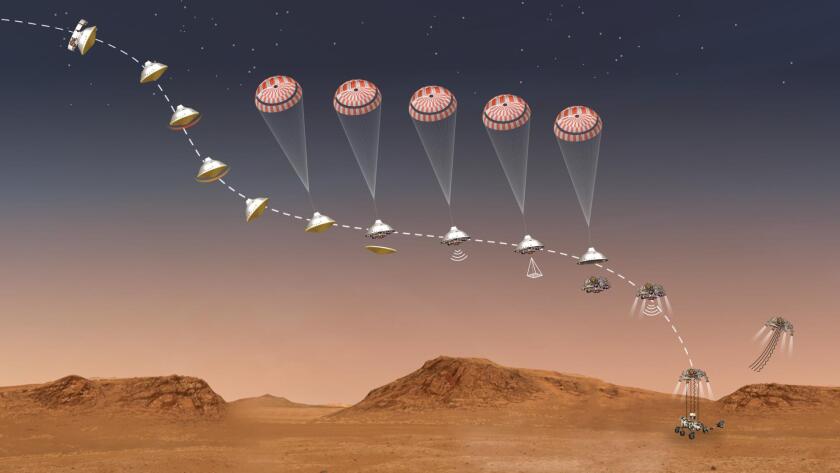 Once the scanner is on the ground, it will spend more than a month conducting system checks and preparing for the work ahead.

Weighing in at 2,260 pounds, 10 feet long, and a powerful robotic arm, Perseverance looks like a more robust Curiosity twin. But while it focused on studying the rocks of Mars using a set of laboratory instruments on its belly, the new robotic rover has a sophisticated system for collecting and storing Martian samples that future spacecraft would collect and return to Earth.

Perseverance also boasts an unrivaled collection of 23 onboard cameras. Atop its long neck sits Mastcam-Z, which can take detailed close-ups of the minerals on the surface of the red planet. He is joined by SuperCam, which combines a camera, laser, and spectrometers to find rocks that formed or transformed into Martian water.

Weather and dust sensors around your body will track environmental conditions, and a radar imager will examine geological structures up to 30 feet or more below its six wheels. 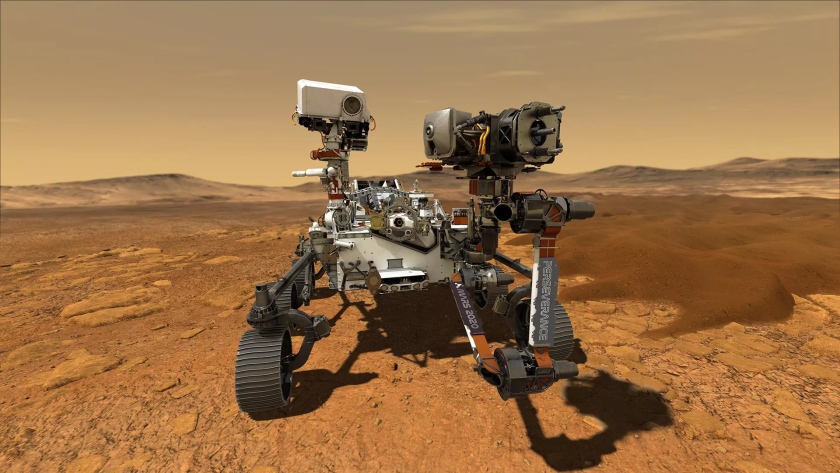 An illustration of the Perseverance in Jezero Crater

Both Curiosity and Perseverance have robotic arms, but the new rover features a much larger “hand”. In its palm is PIXL, whose X-ray spectrometer will analyze chemical and textural changes in rocks and soil that may have been left behind by ancient microbial life. It shares space with SHERLOC, an ultraviolet spectrometer that, in conjunction with a camera called WATSON, will use an ultraviolet laser to observe the mineralogy of a rock, collect organic compounds and identify possible biological signatures.

Perseverance has some major improvements over Curiosity, including sturdier wheels to withstand the unforgiving terrain. Autonomous driving software will allow you to cover more ground than its predecessor.

Then there’s Perseverance’s sidekick Ingenuity, the first helicopter designed to fly in another world.

Authorities say the 4-pound helicopter can stay in the air for up to 90 seconds at a time, traveling about 980 feet per flight at an altitude of 10 to 15 feet above the ground. (If that sounds humble, compare it to the Wright brothers’ first 12-second flight.) Ingenuity could become the Sojourner of flying planetary missions, venturing a few momentous steps for future, more science-oriented aviators to examine for miles.

The explorer will conduct a test that is crucial if humans want to set foot on the red planet. The Mars In-Situ Oxygen Resource Utilization Experiment (MOXIE) will inhale the carbon dioxide that makes up about 96% of that planet’s atmosphere and, like a tree, “breathe out” oxygen that could stored for human consumption or used to make propellants to power spacecraft on Mars. If it works, it should produce oxygen at a rate of up to 0.022 pounds per hour.

And of course, while studying the terrain, Perseverance will store pieces of the planet that future missions will transport to Earth, where human geologists and their powerful laboratory instruments will be able to study them in detail.

Even with all this effort, scientists may not find convincing evidence for life on Mars. So what?

That result would still provide valuable information about what it takes for life to take root, Stack Morgan said.

“What is the special formula that is needed to form life?” He asked. “It may not just be a livable environment and I think that’s something we need to know and learn.”

For now, officials say they are focused on the task ahead: getting the rover safely to the surface of Mars. The roughly seven-minute entry, descent, and landing sequence requires a flurry of carefully choreographed footsteps, to slow the spacecraft from 12,500 miles per hour high in the atmosphere, to just 1.7 mph shortly before landing.

Matt Wallace, deputy director of mission projects at JPL, is confident the team will keep their streak of robotic rover landings alive. Still, he explained, he will sleep better after that day.

“I really want to be able to stop waking up at 4 in the morning thinking about that,” he commented. “That’s exciting. And I sincerely hope this mission does what it was designed to do. “