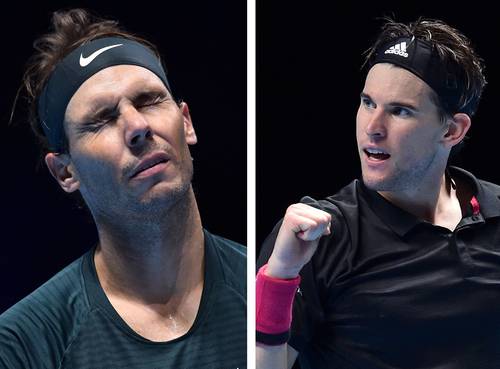 ▲ Nadal lost in straight sets 7-6 against Thiem and will now seek his place in the semifinals against Tsitsipas. Afp Photo

London. Rafael Nadal, number two in the world rankings, lost in his second turn at the London Masters to Austrian Dominic Thiem (3) in straight sets of 7-6 (9/7) and 7-6 (7/4), and the pass to the semifinals will be played against the Greek Stefanos Tsitsipas, who defeated the Russian Andrey Rublev.

After a solid debut in the final ATP tournament that brings together the eight best tennis players of the season, precisely against Rublev (6-3, 6-4), Nadal found himself with a very solid rival, one of the few that can face it from you to you on whatever surface. After two hours and 25 minutes of intense battle, the balance declined in favor of the Austrian.

Congratulations to Dominic. He played a fantastic game and I played well too, Nadal declared. “I don’t have a negative feeling. I lost, but I had a lot of chances in the first set and I was a break up in the second. I’m happy with how I played ”, he added.

Thiem, who had already eliminated Nadal in the Australian Open quarterfinals earlier this year, was confirmed as the Balearic’s executioner.

In the first tiebreaker, Nadal took a 5-2 lead and had two set balls that his rival saved showing character. After going 7-6 down, Thiem scored three points in a row and didn’t miss his first chance to win the opening set.

In the second set the tremendous equality was maintained and the only attempt to escape by the Spanish was quickly aborted. It happened after the seventh game, when he scored his only break of the game to reach 4-3 and serve, but the Viennese immediately returned the service break.

Nadal accused the blow and with 5-5 he chained three improper errors, within his only gap in the match, to give his rival a 0-40 that seemed definitive. It was not so. He took out his rage, lifted three match balls, including a spectacular blow to the back below the legs, and breathed until another tiebreaker, which he lost.

Thiem maintained the initiative in the final stages of the match. After 3-3, he pressed the accelerator towards victory, which he finished off on the fifth match ball he enjoyed, finally bending the arm of Nadal, who continues to depend on himself in this masters tournament, despite the defeat.

The day closed with the triumph of Stefanos Tsitsipas against Andrey Rublev, Nadal’s first victim in this contest. The Greek won 6-1, 4-6 and 7-6 (7/6) in a duel with great contrasts and that hindered the presence of Nadal in the semifinals. Tsisipas will fight on Thursday against Rafa for the same ticket. Rublev is out of options to break into the top four.