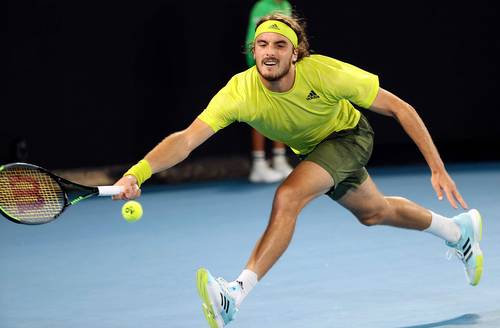 ▲ Stefanos Tsitsipas was losing by two sets, but managed to recover to eliminate the Spanish tennis player.Foto Afp

Melbourne. The Spanish Rafael Nadal squandered an advantage of two opening sets and was eliminated in the quarterfinals of the Australian Open when he lost in an exciting duel against the Greek Stefanos Tsitsipas, sixth in the world ranking, who won 3-6, 2-6, 7-6 (7/4), 6-4 and 7-5 in Melbourne, where spectators will be allowed to return to the Open from today, after five days of absence.

The world tennis number two presented his commitment with a record of 223-1 won and lost in matches after taking the first two sets of the Grand Slam duel. Thanks to his own mistakes and the daring of Tsitsipas, that mark came in at 223-2.

A pair of indifferent overhead returns and a third-set tiebreaker setback set Nadal’s unraveling in motion, and his bid to set the all-time record of 21 Grand Slam titles in men’s tennis – now tied at 20 with the Swiss Roger Federer -, was shipwrecked before Tsitsipas.

“It has been a bit of everything. He was very fine. He improved a bit in the third set and, after winning it, he let go and started playing at a very high level, “said Nadal, who interrupted his press conference for a while after accusing a cramp in his right leg. I have to go home and train a little better, he added.

“I was very nervous at the beginning, I cannot lie to you. I don’t really know what happened after the third set. I started to fly like a little bird. Everything worked out for me. The emotions at the end are indescribable ”, commented the Greek, who never lowered his arms, who after Nadal’s surprisingly bad tiebreaker in the third set, began his epic recovery.

Tsitsipas, 22, striking tennis and having never reached the final of a major tournament, will face Russia’s Daniil Medvedev in the semi-finals on Friday.

Medvedev eliminated his compatriot and friend Andrey Rublev, with whom he won the ATP Cup for Russia, and extended his winning streak to 19 games, winning 7-5, 6-3 and 6-2. It’s never easy, Medvedev said of facing a friend. But we are all very competitive. During the game you can see that nothing matters. You just need to win.

After the game, Medvedev asked his coach to massage his left thigh while he sat in a chair at the foot of the court before the television interview, in which he said he ended the game suffering from cramps.

Medvedev will be one of the two Russians present at this stage at Melbourne Park. The other is Aslan Karatsev, number 114 in the ATP rankings and qualified for the main draw of a great for the first time in his career, who will face world number one, Serbian Novak Djokovic, for a place in the final. .