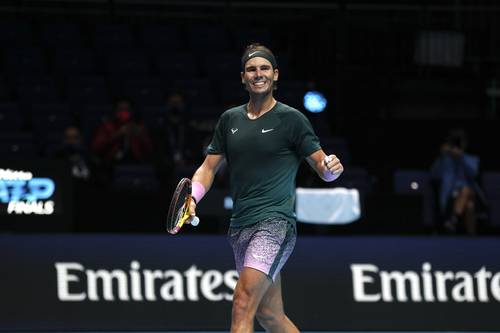 London. Spanish Rafael Nadal, number two in world tennis, qualified for the semi-finals of the Masters at the end of the season in London after beating Greek Stefanos Tsitsipas (6) on the third and last day of his group, 6-4, 4-6 and 6-2.

Tsitsipas, the champion of the last edition of the Masters Tournament, is eliminated after this decisive duel, which allowed Nadal to take second place in the London 2020 Group, and will play on Saturday in the semifinals against the winner of the Tokyo 2020 key with the Russian Daniil Medvedev (4).

In general terms it was a very positive game for me, Nadal appreciated. Being in the semifinals here, in the last tournament of the year, is something important. I’m happy about it and already thinking about the duel against Daniil, he said.

The Spaniard needed victory to continue in the tournament, after his defeat on Tuesday against Dominic Thiem, who qualified for the semifinals that day and also guaranteed the leadership of the group, whatever happened on the third day.

Therefore, the Austrian, third in the ATP rankings, played totally relaxed in the procedural duel that he lost 2-6 and 5-7 against Russian Andrey Rublev (8), already eliminated after two consecutive defeats.

Thiem will meet his semi-final rival this Friday. He will be the winner of the duel between Serbian world number one Novak Djokovic and German Alexander Zverev.

Nadal continues to pursue his first title at the Masters, a tournament in which he has reached the final twice (2010 and 2013), but with losses both times.

The Masters is a traditionally elusive competition for Spanish tennis, which has only been conquered by Iberians on two occasions, Manuel Orantes (1976) and Álex Corretja (1998).

Unlike Nadal, in this masters tournament, which brings together the eight best in the world every year, the Swiss Roger Federer holds eight titles and Djokovic five.

It is always difficult to play here against the best players in the world every day, at the end of the season and most of the time you arrive tired, but this year it is a bit different, Nadal commented.

Tsitsipas, meanwhile, suffered his sixth loss in seven games to Nadal. Last year, the Mallorcan had already beaten the Athenian in the group stage of the Masters, but then it was very different, since Tsitsipas qualified for the semifinals as leader of his key and then won the tournament, while Nadal was eliminated, without power reach the semifinals.