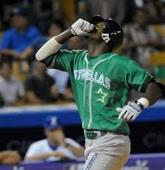 Crismatt (1-0) pitched five innings in no-run for the Pachyderms to score their first win of the tournament, with a loss. The Stars have two games pending against the Bulls, one of them is in the eighth inning with the East 3-1 ahead.

Crismatt (1-0) scored the victory by allowing four hits with four strikeouts, while the reverse went to the Cuban Yunesky Maya (0-1), who covered five and two-thirds of innings with three indisputable allowed and a couple of laps (one clean), and struck out two.

Right-hander Wirfin Obispo was credited for the save (1) by throwing the ninth with a hit and a pair of strikeouts. The particular series between both novenas is 1-1.

The Stars scored a return in the first inning as a result of two errors by the Aguilucha defense, and the other score came in the sixth on a solo homer by left patrol Junior Lake.

The Eagles (1-3) discounted in the sixth when Francisco Peña reached base on an error on a shot from shortstop Jeremy Peña, advanced to second on a ground ball by Ramón Torres, reached third on a deflected pitch from the pitcher and scored with a single to center from John Nogowiski.