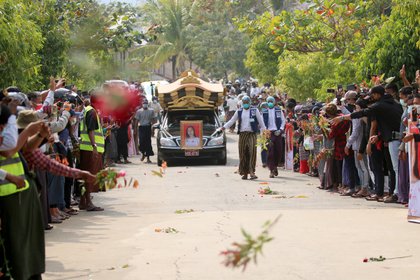 Image of the funeral for the young woman who died during a protest against the coup of the military junta in Burma. . / EPA / MAUNG LONLAN

Myanmar’s military junta threatened protesters who have taken to the streets in recent weeks to protest against the coup on February 1 that “the path of confrontation” will mean loss of life, while the country prepares this Monday for a new day of strike.

In a public announcement broadcast last night on state television and posted on his YouTube channel, the military junta accused the protesters of “increasing their incitement to revolt and anarchic crowd” last Saturday, when two people were killed by police shots during a protest in Mandalay, the second largest city in the country.

“The protesters are now inciting people, especially emotional adolescents and young people, onto a path of confrontation in which they will suffer loss of life,” the statement said.

Tom Andrews, Special Rapporteur for The UN, was concerned about this “threatening” message and warned the military junta on Twitter that, unlike what happened during the bloody riots of 1988, the actions of the security forces are being recorded, so they will have to assume their responsibility.

The military junta issued this warning at the start of a new strike day in which the internet signal was cut off at 1 a.m. and will not be restored until 12 noon in Rangoon and 9 a.m. in the rest. of the country, according to what internet providers informed Efe. 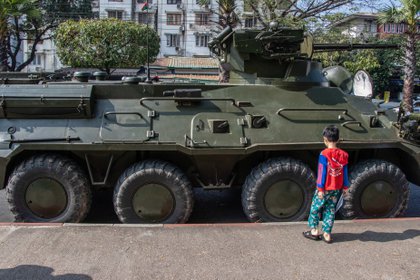 A boy plays next to a military vehicle in Rangoon. SANTOSH KRL / ZUMA PRESS / CONTACTOPHOTO

Despite the threat, tens of thousands of people took to the streets of major cities on Monday after a tragic weekend in which two protesters were killed by police violence.

Since the morning the main arteries of Rangoon, Naipyidó -the capital-, Mandalay and other towns were occupied by protesters, demanding the restoration of democracy and the release of political prisoners in what could become the largest day of protest since coup d’état perpetrated by the Army on February 1.

In Yangon, the most populated city, the roads close to most of the Embassies, especially those of the US and South KoreaThey had been blocked by the forces of order, as they were especially crowded during the protests.

The protesters came out en masse throughout the country despite the police repression that last Saturday cost their lives due to police shootings of two protesters in Mandalay and the warning issued last night by the military junta that “the path of confrontation” will mean the loss of life.

“The protesters are now inciting people, especially emotional teenagers and young people, onto a path of confrontation in which they will suffer loss of life”, Reads the communiqué of the uniformed officers issued by Burmese state television. 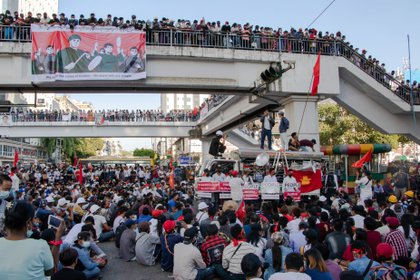 Tom Andrews, UN Special Rapporteur on Human Rights in Burma, was concerned by this “threatening” message and warned the military junta on Twitter that, unlike what happened during the bloody riots in 1988, the actions of the security forces are being recorded, so they will have to take responsibility.

Witnesses told Efe how Police suppressed Saturday’s protest with live ammunition and rubber bullets, tear gas bombs, as well as metal projectiles made of screws and launched with slingshots..

With the two deaths on Saturday, there are already three deaths due to police repression, after confirming on Friday the death of Mya Thwe Thwe Khine, a 20-year-old girl who died of a police shot in a protest, and whose funeral is held today in the capital, Naipyidó.

The Army justified the seizure of power by an alleged electoral fraud in the elections of last November in which the National League for Democracyia, the party led by Aung Sang Suu Kyi, swept, as it did in 2015.

The United Kingdom and Canada will sanction three Myanmar generals “for serious human rights violations” after the coup d’état The young woman was shot in the head died during protests in MyanmarMyanmar, the almost unknown country that leads a Nobel Prize of Peace under accusations of ethnic cleansing A group of hackers attacked pages of the Myanmar Army in protest of coup