One of the breakdowns most feared by drivers is water leakage, as this can end up leading to engine overheating and an even more serious and costly breakdown. But a puddle of water under the car is not always a sign of something serious.

When we go to the place where we have parked our car and we see with regret that there is a puddle under the engine, the first thing we think about is that something has broken in the cooling system and that fixing it is going to cost us good money. Has a stone pierced the radiator, has a hose broken? There can be a number of causes of a fluid leak, but not all are necessarily serious or concerning.

Why is my car leaking water and not heating up?

The first thing to clarify before entering the matter is that cars do not use water to cool the engine, but an antifreeze coolant that is specifically designed to perform its function without causing corrosion in the internal elements through which it circulates.

That’s why when we run out of coolant we should not fill with water and, if we have not been able to avoid doing so, we must replace all the liquid with a new one that meets the manufacturer’s recommendations to avoid greater evils in the future.

But regardless of all this, why isn’t my car heating up if it’s losing coolant? Well, there are several reasons and We do not mean that the leak is recent or very small and the fluid level has not dropped enough that the engine cannot cool.

The first and main reason why a vehicle leaks through the engine area is the air conditioning, especially when we use it daily in summer, of course. The cause is not an anomaly, but a simple and straightforward physical phenomenon.

The air conditioning works through a sealed system through which a gas circulates that changes its physical state depending on the pressure to which it is subjected. The circuit compressor makes it possible for the gas to go to a liquid state and vice versa, stealing heat from the environment and causing the ducts to cool notably. 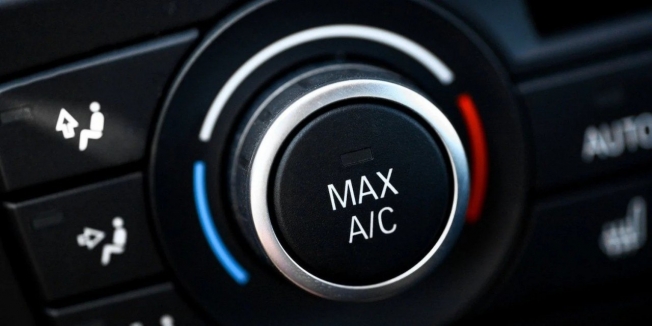 Air conditioning is the main cause of puddles of ‘water’ found under the car’s engine.

This causes the humidity of the air at room temperature present outside the tubes condenses on contact with cold pipes, becoming liquid and dripping. Therefore, it is not a fault or something that should concern us, but a simple consequence of using the air conditioning.

The second common cause of dripping in the engine area that does not lead to engine overheating lies in the headlight washers, a very common system in vehicles equipped with xenon headlights.

This type of lighting became very popular years ago and for them to be effective it is necessary to include a cleaning system that allows a better vision and less glare.

For this, the headlights include a piping system from the windscreen washer reservoir through which the mentioned cleaning agent circulates. As a result of use, dirt, vibrations or shocks, these pipes can crack or become damaged, generating in this case a drip that can confuse us.

In this case, it is a fault that we must correct to ensure that we circulate with good visibility and safety, but we are not facing a serious failure or ending up in our vehicle.

Turn up the temperature

On the other hand, if we notice that the engine of our car overheats and we see a coolant leak under the car, so we must worry and act quickly to avoid greater evils.

In this case the cause may be the radiator, which is the element in charge of cooling the refrigerant. If there is a leak or break, the liquid will escape and the system will not perform its function properly.

My car loses oil, how do I know the cause and give it a solution? Read news

The Water Pump It is another of the common causes of leaks that cause overheating, since its task is to push the coolant throughout the system. The failure usually causes the sealing gasket to not be able to hermetically close the assembly, leading to the leak.

In this type of case it is vital to go to a mechanical workshop to solve the problem or else it is very likely that the cylinder head gasket will end up suffering the consequences and the engine is disabled.