Since the first quarter of 2020, the world has practically lived in a confinement in the face of the threat of COVID-19. Silence has become the perfect setting for a chemical produced in China to be forever changing life in Mexico and the United States.

In the scene of the fentanyl trade, China puts the raw material, the Mexican cartels labor and United states the dead. 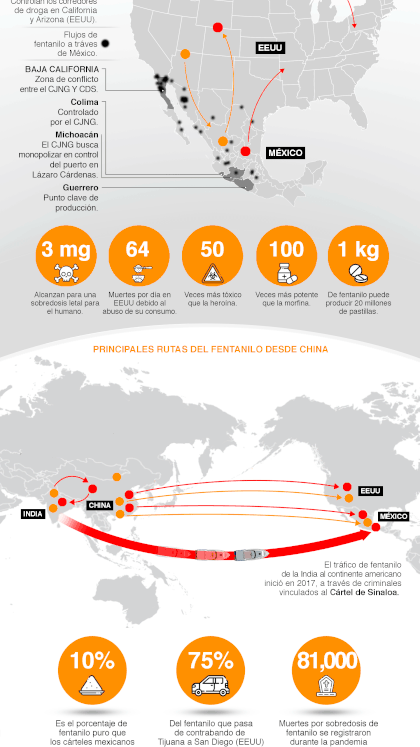 The equation that summarizes this chain of events is very simple: Chinese companies export uncontrollably to Mexico the forerunner, for supply the drug cartels those who process it and traffic it for distribution to the US where the number of fentanyl-related deaths has increased dramatically.

The latest national report on the state of drugs by the US government warns that opioid deaths in the United States have increased dramatically in recent years. In 2016 the number of deaths related to this type of narcotic was 19,413, but for 2017 it increased to 28,466 cases.

Another revealing fact that the report points out is that of the tests carried out in forensic laboratories related to fentanyl. In 2004 the number was 389 cases, by 2017 it went to 56,530 files.

The fentanyl is considered by US authorities to be a strong synthetic opioid similar to morphine, but with an effect up to 100 times more powerful, addictive and fulminating. In addition to having a more powerful effect than other drugs, experts note that importation is easy for the Mexican drug cartels since it is also a drug that can be imported and prescribed legally because it is used to treat patients with severe pain. But the irresponsibility of the Chinese authorities and the lack of control of the ports of entry in Mexico, allow much greater amounts to be trafficked than necessary to cover genuine medical treatment.

In its prescription form, fentanyl is known as Actiq®, Duragesic® and Sublimaze®.4,5 Common names for illegal fentanyl, according to the National Institute on Drug Abuse in the United States are Apache, China Girl, China White, Dance Fever, Friend, Goodfellas, Jackpot, Murder 8, and Tango & Cash.

According to the institute, like heroin, morphine and other opioids, fentanyl works by binding to receptors in different areas of the brain that control pain, emotions and gives consumers a feeling of well-being and euphoria.

For the World Health Organization (WHO), opioids can cause breathing difficulties, in addition to that an overdose can lead to death. This opioid is illegally marketed in the form of pills, injectables or even patches.

The low price you can get in China multiply the profits for criminal organizations. Data from the US government indicate that a kilo of “Murder 8” in the Asian country has a cost of USD 9,000 but once processed in Mexico in the form of pills it can give the cartels profits of up to $ 1.3 million.

Besides importing fentanyl from China and recently also from India, Mexican cartels buy machinery in these countries for drug processing they generally sell in pill form. One kilo is enough to produce 20 million pills.

– 3 milligrams is enough for a lethal overdose for humans.

– 64 deaths per day in the US due to the abuse of its consumption.

The poison that came from China

In May 2019 the government of Beijing amid international pressure implemented sanctions on the illegal production and sale of fentanyl and its analogs; however, an investigation conducted with public sources last year identified 64 suspicious Chinese companies engaged in production and / or trade of the substance and its precursors as well as the sale of machinery. Its main clients are the Sinaloa cartels and Jalisco New Generation (CJNG) in Mexico.

. Mexico it had exclusive access to a database in which the name, business name and contact details of 64 of these companies appear. When trying to contact them by email it was possible to verify that the addresses are mostly false. 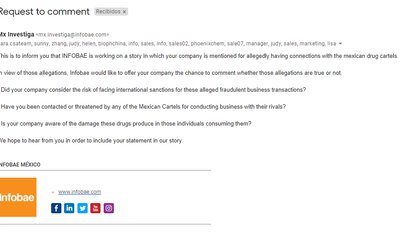 Emails from the companies involved in the investigation were deactivated. (Screenshot)

In their corporate profiles it can also be seen that the way they carry out their transactions is unclear. Some make their sales on the internet through bitcoin or transfers via foreign exchange sending companies.

The first 65 companies that appear on the list sell “Murder 8” to individuals and small groups, among whom are intermediaries for the Mexican cartels.

The rest of the companies on the list are more strict in terms of the information they ask their buyers: they require filling out a series of forms and answering questionnaires, in exchange they offer discretion both in the operations and in the shipment of the substance, although they never verify the authenticity of the documents sent.

The machinery to process the precursor also represents a very small investment for the cartels. For less than USD 500, anyone can buy a small dam to process the drug into pills. For twice the investment – about USD 1,000 – it is possible to purchase two small machines for the production of the pills and enough fentanyl to start a business that will end the lives of countless victims.

“The wide Availability of machinery on the internet allows ‘rookie criminals’ to make millions of doses that once in the market they can have deadly consequences for suppliers ”, indicates a senior source from Europol, an organization that looks with concern at what is happening in Mexico and the United States, since Europe fears this problem will expand in the old continent. The source who asked to keep his identity confidential indicated that a chain of events is what allows this illegal practice to continue.

. Mexico communicated three times with the Embassy of china in the country and received no response to calls or emails. Diplomatic authorities were silent and did not comment. about the topic. 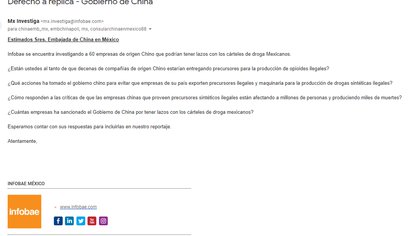 The Chinese embassy in Mexico did not respond to calls or emails from .. (Screenshot)

Police officers from international organizations closely monitoring these illegal procedures They revealed that they were aware of these illegal maneuvers and explained that the reasons for not stopping shipments are various. On the one hand, they allege complicity of certain authorities that for many years have allowed the entry of illegal goods through customs throughout the country. On the other hand, international officials indicate that the lack of preparation of customs personnel is another weak point in Mexico’s official policy to fight drug trafficking.

“It is a matter of state capacity. There is a devastating data that is the number of containers that enter Mexico through the Pacific, it is impressive, “he told this media. Carlos Rodriguez Ulloa, consultant and researcher at the Collective for Analysis of Security with Democracy, AC (Casede).

Other analysts consider that part of the responsibility for this drug reaching the United States falls firstly on the Chinese government, which, despite being aware of the situation, does not take forceful actions, and secondly, on the Mexican authorities as your customs industry is not trained to adequately identify illegal chemical precursors.

They point out that the current legislation does not completely cover the circumstances surrounding this type of chemical precursors and often leaves a legal vacuum that is exploited by these companies of Chinese origin and that ends up in the shipment of gigantic quantities of chemical precursors for processing. opioids.

On January 10, 2018, Mexico published in the Official Gazette of the Federation an agreement that establishes “the classification and codification of merchandise and products whose import, export, entry or exit is subject to sanitary regulation by the Ministry of Health ”, among these are the N-phenethyl-4-piperidone (NPP) and 4-anilino-N-phenethylpiperidine (ANNPP), substances considered chemical precursors of narcotic drugs, such as Fentanyl and similar substances, whose introduction into the national territory was not restricted. 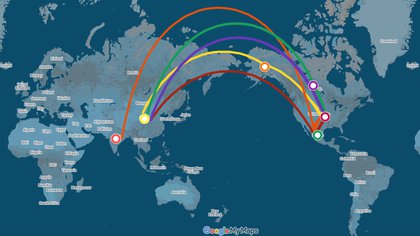 In September 2020, the Ministry of Defense of Mexico (SEDENA) released the five routes by which fentanyl reaches the United States: via China-Alaska; China-Canada, China-Mexico; India-Mexico.

In the case of Mexico, either from China or India, the drug enters through the Pacific to the ports of Manzanillo, in Colima, and Lázaro Cárdenas, Michoacán, and from there it goes to states such as Baja California, Jalisco, Nayarit, Sinaloa and Sonora from where it is distributed to the rest of the country and trafficked to the United States in trucks where the pills are hidden among these goods or in the tires of trucks of cargo or other types of vehicles.

Its transfer once processed is so simple that anyone who walks across the border can carry thousands of pills.

The drug also reaches the US through the tunnels that the cartels have built along the Mexican border. where a year they traffic with millions of dollars in illicit substances (Tomorrow, second part).

. Mexico was able to independently verify that the following companies sent shipments of fentanyl and / or equipment for processing to drug cartels in Mexico. 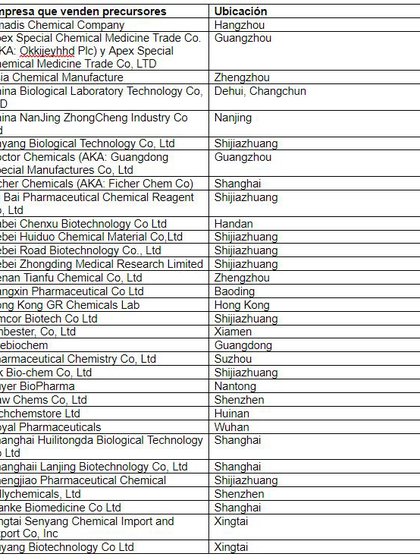 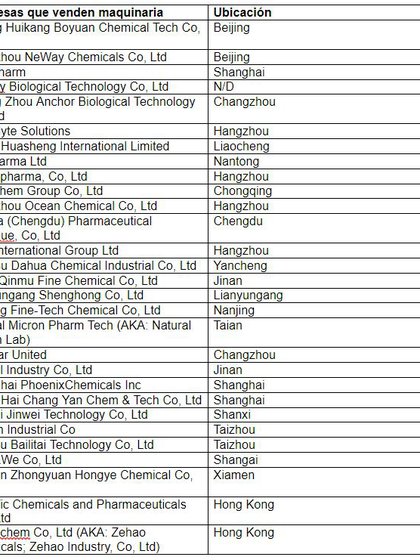 From Wuhan to Toluca: they seized 25 kilos of fentanyl precursors, the drug of death Fentanyl, the other epidemic that advances from China and that cannot be eradicated The tentacles of the Sinaloa Cartel by China and India: this is how the criminal group operated to provide itself fentanyl