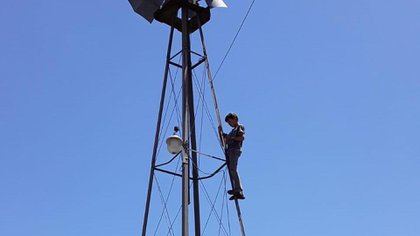 The image of Gualterio Canezza, uploaded to the mill of his house to be able to send his homework online

Education through virtual teaching generated unusual conditions in rural areas of Argentina. The difficulty of connecting to internet antennas led students to perform “feats” in order to fulfill their homework. Such was the case with Gualterio Canezza, a 13-year-old boy whose story went viral in the last few hours because in order to fulfill his tasks, he must get on a mill and only then get a connection to the network with a cell phone.

The teenager lives in Jubileo, a small rural town in Entre Ríos located just 45 km. from the city of Villaguay. Given the difficulty of connecting to the 3G and 4G antennas, the 13-year-old student has to juggle to be able to download the homework that his teachers give him and then forward the exercises done.

The story came to light after a teacher at her school, the School of Agrotechnical Education No. 2 “Justo José De Urquiza”, publish the image of the child and the story.

“This boy is a student of mine from the Urquiza School, his name is Gualterio, a phenomenon, he has to go up to the mill to get a signal and in this way it lowers its activities !!! This year it delivered flawlessly all its stages in a timely manner !!! “, wrote the teacher Arturo Humberto Bahrich on your Facebook profile. 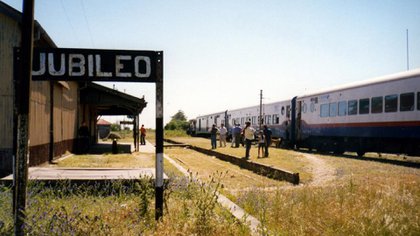 The teacher also asked an educational authority in Entre Ríos or a telephone and internet company to take charge of the child’s situation.

The adolescent lives with his parents, a rural laborer and a housewife, in a “lost” home in the middle of the field. To access your home, you have to turn off at a specific point on Route 18, take a gravel road and there continue for about 15 km.

“I hardly got to know Gualterio because face-to-face classes were suspended due to the pandemic, but we continued with video calls and the truth is that, despite the difficulties caused by the lack of connectivity, he far exceeded expectations since he delivers all his tasks in a timely manner, ”the professor told the local El Once media.

“I sent him his activities by WhatsApp, he solved them, and the next day he asked me for more,” he completed. 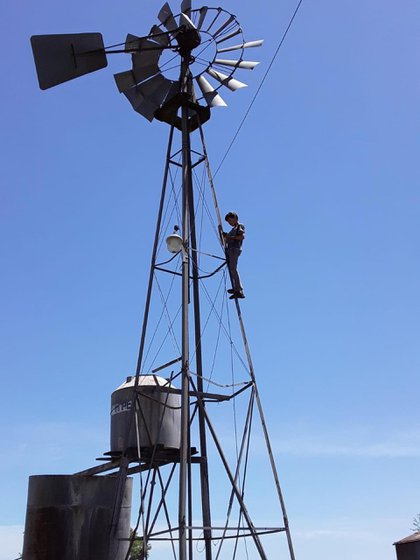 As if that were not enough, the teacher indicated that the child is also a payador and that during the isolation he collaborated with his lyrics for various school events that were carried out virtually.

The goal of the professor’s cyber crusade was difficult: the installation of antennas and equipment in the area cost around 30,000 pesos, to which the payment of about 1,500 pesos per month had to be added to obtain the service.

Thus, after a few hours and thanks to the viralization of the image of the child on the mill, the help did not take long to arrive: A Villaguay official, whose identity was not disclosed, contacted the 13-year-old boy’s family and confirmed his commitment to manage negotiations with a telephone company and thus ensure the arrival of internet to that area.

“It would be like a scholarship, an award for his effort because he really deserves it (…) He is a phenomenal student, he is very polite, respectful and has shown that he has an interest in studying, progressing and advancing so that the future does not catch him off guard ”, added the professor.

Throughout the eight months of the pandemic, different stories of students from rural towns who encountered difficulties in meeting their educational obligations at a distance gained popularity.

Student thrown out of zoom for not turning on the camera

Perhaps one of the most powerful cases in recent times occurred in mid-October, when Brian Peresón, a student from the Electromechanical Engineering degree at the Universidad Nacional del Nordeste (UNNE), was expelled from a mathematical analysis class for not having his camera turned on during it.

Peresón lives in Lanteri, a rural town in Santa Fe, and in order to support his studies he had to raise an antenna with his own hands and with the help of his father in his rural home.

The day he was expelled, he had to go to study at the house of an aunt, who barely had a slight internet connection at her door, in the middle of the street.

Between the teacher and a teaching assistant they decided to expel Peresón from the class and a few days later, after the great repercussion that the case took at the national level, they apologized and the university authorities fixed the problem with the student.