A leak in Geekbench has let us see a part of the specifications of the Motorola Moto G10 Play, a terminal that in said performance test is identified as Motorola Moto G Play (2021), and that it will be the successor to the Motorola Moto G9 Play, which means that we are facing a model that will be aimed at covering the lower-middle economic range.

In the back we have a square space where we see a total of three cameras together with an LED flash, and just below it is the fingerprint reader, integrated in a circle with the Motorola brand logo. We do not have details about the quality of finishes of this terminal, but taking into account the price range to which it is directed (less than 200 euros) we can assume that it will be finished in plastic, a resistant and cheap material. 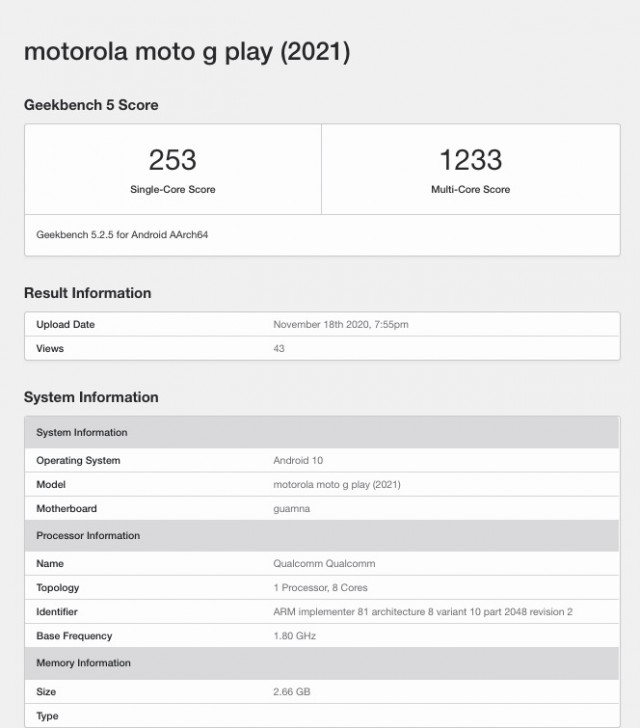 Possible specifications and price of the Motorola Moto G10 Play

Its official price has not yet transpired, and it is understandable since we are facing a terminal that will not reach the market until well into 2021, but since it is the successor to the Moto G9 Play, it is most likely that it will end up hovering between 170 and 180 euros, a figure that seems a bit high, especially considering its specifications:

We cannot rule out that Motorola ends up launching as well a version with 4 GB of RAM and 64 GB of storage capacityIn fact, it would make sense since, with the configuration that we have indicated above, that Motorola Moto G10 Play would be behind the Motorola Moto G9 Play in terms of memory and storage.

It is also possible that the listed model be a prototype configured with a limited amount of RAM, and that the final version of the Motorola Moto G10 Play ends up arriving in a single variant with 4 GB of RAM and 64 GB of storage capacity.