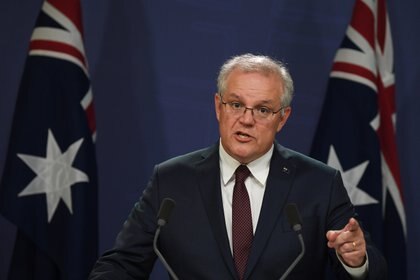 Sydney (Australia), Nov 21 . .- Australian Prime Minister Scott Morrison said today that the report showing that Australian elite soldiers killed 39 Afghan civilians and prisoners was “disturbing and alarming”, but insisted that It must be the Justice who determines whether war crimes were committed.
“Of course, like other Australians, I found the content of the report disturbing and alarming,” Morrison said in his first statement since the Defense Forces report revealing these crimes was released on Thursday.
In statements collected by the ABC News channel, Morrison was cautious and stated regarding the alleged existence of war crimes that it is necessary that content as serious as those contained in the report be managed by the justice system in accordance with Australian law .
In this sense, he stressed that all judicial procedures must respect the presumption of innocence of the accused soldiers and expressed his concern for the veterans who did not participate in this type of act and whose image may be damaged.
The final report of the Australian Defense Forces General Inspectorate, 465 pages long and with several sections censored for legal reasons, addresses the alleged war crimes committed by its soldiers in Afghanistan between 2005, the year that Australia reinforced its military presence in that country, and 2016, when the investigation was ordered.
Investigators are also calling on the Australian Police to investigate 19 elite corps soldiers for their involvement in 23 incidents for which there is “credible information” that they violated international laws of war and humanitarian laws on the treatment of non-combatants.
The text reveals that the illegal killings, mostly perpetrated in 2012 and 2013, did not occur “under pressure in the heat of battle”, and that even some of the Australian patrol commanders forced younger soldiers to kill Afghan prisoners in initiation rituals.
Australia deployed up to 1,500 soldiers for combat operations between 2001 and 2014 in Afghanistan, which was considered the largest military contribution of a country outside the Atlantic Alliance, and since then it has kept small military detachments dedicated to training and training. .