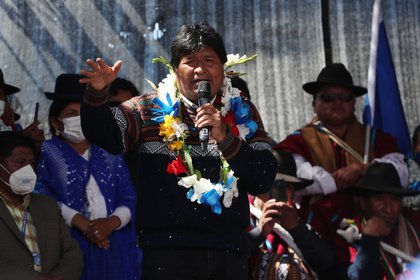 The former president of Bolivia Evo Morales (C) is seen together with his candidates for governor and mayor, today in El Alto (Bolivia). . / Martin Alipaz

La Paz, Feb 23 . .- The former president of Bolivia Evo Morales toured this Tuesday in a large caravan the city of El Alto, political bastion of the MAS, to reinforce the campaign of the candidates for the Mayor’s Office and the Governor of the Movement to Socialismo (MAS) for the subnational elections of March 7.
Morales, who is on a tour of the country as the MAS campaign manager, toured several districts of El Alto, the second most populated city in Bolivia, together with the candidates for the regional government, Franklin Flores, and for the mayor of El Alto, Zacarías Maquera. .
Former Senate President Eva Copa leads the polls for the Mayor’s Office of El Alto with more than 70%, so Morales and his candidates seek to reinforce the MAS campaign, a party that last year expelled her from their ranks.
While former mayor Zacarías Maquera obtains only 7.7% of the intention to vote in that city, according to the latest polls.
RECOVER YOUR BASTION
This is the second visit Morales makes to El Alto as a former president, and unlike other occasions when the ex-president’s rallies were massive in this city, the caravan was followed by dozens of people throughout the different districts.
“Sisters and brothers we are going to work for the people of El Alto, you cannot lose five more years again (…) with the right you cannot work,” Morales said in one of the several interventions he made in that city in clear reference to the current mayor of the opposition National Unity, Soledad Chapetón.
In statements to Efe, some local leaders expressed their “happiness” to be with their “former president brother” and stressed that with Morales “democracy will be rescued” and that the support of the people of El Alto for MAS and Morales is still “broad.”
In the Senkata area, where in the 2019 crisis some eleven people died in the middle of a military and police operation, Morales paid tribute to the victims and said: “you have led the fight in difficult times and we cannot forget that. , of course there is much to do “.
In several sections of the route, Morales launched harangues in chorus with the attendees as the characteristic phrase of his party “fatherland or death.”
Twelve days before the subnational elections, Evo Morales pointed out that the objective of the MAS is that its candidates for the nine governorates win in the first round.
“We started the caravan with our candidates touring the beloved city of #ElAlto, bastion of historical struggles against neoliberalism and dictatorships and the main defender of the country’s natural resources,” Morales wrote on his Twitter account this Tuesday morning before starting the tour.
WITHOUT CHIN
The former president of Bolivia, who on February 15 took up his party’s campaign “fully” after recovering from covid-19, acknowledged in a recent interview with Efe that he used “very little” the mask, which “is a weakness is a mistake “and he assured that from now on he would carry it” sacredly “.
However, in some of his stops in the city of El Alto Morales, the chinstrap was removed to address the hundreds of people who followed the caravan, even many of the attendees did not wear a mask either.
MAS candidates lead in the La Paz governorates, the seat of Government and Parliament, and the central Cochabamba, while the opposition group Creemos gains an advantage in Santa Cruz, the most prosperous in Bolivia, according to the latest survey conducted for the Red Uno and Bolivisión television networks by the Focaliza company.
The subnational elections have achieved great relevance because they were the first after the elections of last November in which the MAS regained power with the election of Luis Arce as president of the country, after Morales’ resignation in 2019, and because the ruling party foresees regain their dominance in most regions.
In the sub-national elections, governors, departmental assembly members, mayors and councilors will be elected for the nine departments and more than 330 municipalities of the country.