In early April 2021, the European Medicines Agency (EMA) confirmed that Vaxzevria, the Oxford / AstraZeneca vaccine against COVID-19, it could be linked to the very rare cases of thrombosis with thrombocytopenia that had been reported on the continent.

After this communication, some states of the European Union, such as Spain, decided to paralyze the administration of this drug, despite the fact that the EMA insisted that the benefit of vaccination is much higher than the possible damage that can cause this very rare side effect.

From this stop, a team led by the London Mathematical Laboratory has explored what consequences this decision would have on the health of the population and on the situation of the pandemic. To do this, they have used a epidemiological model called SEIR with which they have estimated the excess mortality from covid-19 and possible consequences in two scenarios: France and Italy. The results are published in the latest issue of Chaos.

The main conclusion of the model is that the excess mortality due to the interruption of this vaccine far exceeds the deaths caused by thrombosis, even in the worst scenarios of frequency and severity of the side effects of the drug.

Evolution of excess mortality caused by pausing the Oxford / AstraZeneca vaccine as a function of the number of days of interruption. / Davide Faranda, Tommaso Alberti, Maxence Arutkin, Valerio Lembo, and Valerio Lucarini

Through the movements of the model, it is possible to estimate the excess mortality from covid-19 and from these side effects related to the vaccine

Thus, the model ‘moves’ the population from one compartment to another according to the epidemiological situation, the spread, the time it takes to show symptoms and to be cured of the virus. Through these movements, one can estimate the excess mortality for covid-19 and for these vaccine-related side effects.

Due to the large number of uncertainties of these thromboses with thrombocytopenia, for which it is not yet known which groups are most vulnerable or their actual incidence in the vaccinated population, the researchers calculated the worst possible scenario and they assumed that these side effects would have a higher associated mortality than currently reported.

“Our work shows that stopping vaccinations with AstraZeneca for three days, without replacing them with another option, leads to 260 additional deaths in France and 130 in Italy ”, indicates Faranda. The difference is due to the fact that, as of March 15, 2021, both countries have epidemiological situations and a different reproduction number or R0.

What Happens When Doubling Vaccination Efforts

The model interprets that if Vaxzevria vaccination is resumed at the same rate as before discontinuation, there will still be a notable excess mortality: those who have not been vaccinated in that period can become infected and contaminate other people.

Moreover, although the campaign was resumed with the double injected doses During the same number of days of the pause, the excess mortality would continue in the next days, although with slightly lower figures than in the standard restart. “This is an obvious result of the non-linear effects of epidemiological dynamics,” responds the lead researcher. 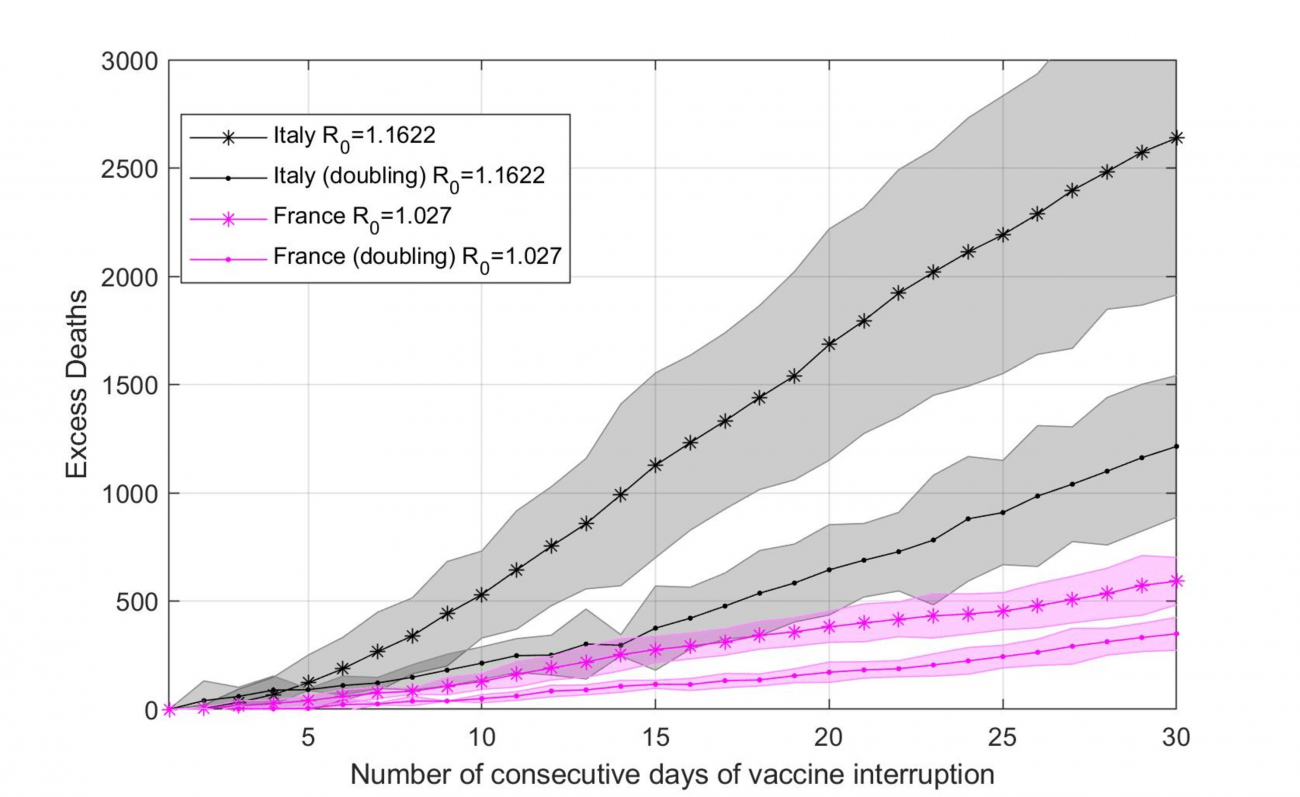 This shows, according to the authors, that the effects of the interruption are difficult to counteract and would continue over time. To all this is added that public confidence in vaccines will decline, something that directly affects the public health but that this study does not collect.

Faranda acknowledges to SINC that this mathematical interpretation, despite its “robust results” and useful for interpreting the effect of a decision in public health, finds several “limitations powerful”.

Despite the “robust” results of the model, the researchers find other limitations: they only interpret one of the approved drugs and do not include age as a risk factor

The first, he points out, is that the model assumes that there is only one vaccine with Oxford / AstraZeneca features and ‘forget’ all other approved options in Europe. At the same time, he interprets that the pause in this drug is not replaced by another vaccine against covid-19.

Finally, the model does not include the age as a risk factor, something that the EMA is evaluating in the case of side effects related to this vaccine.