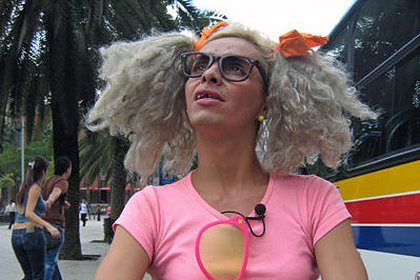 Dany Castaño Quintero, known as La Danny, is one of the most popular characters in Bolívar Park, in the center of Medellín

She combines her work as a recycler, cigar maker and sweet seller (for which she dresses as a fairy, Snow White or girlfriend), with her work as an artist and singer, doing performances and installations in the Bolivar park, in front of the Metropolitan Cathedral of the capital of Antioquia.

There, its audience waits every Sunday for La Danny to arrive with her dolls (the vast majority without legs or arms) and a mannequin of almost two meters with a Kent-style face; a guitar without strings, a tambourine, colorful dresses, teddy bears that have had better days, old shoes, countless objects of all kinds and a potty, with which, before starting, he collects the voluntary donations of the attendees.

Religious as a good paisa, she crosses herself before starting her show, thanks the Holy Spirit (whom she considers her “greatest sponsor”).

“Hi, how are you, Danny’s show, which I do, is going to start. Danny’s play, better known as la gamina, because you have to have your personality ”, announces the artist, according to a chronicle written by Orlando Arroyave.

Eventually, she assures that she wants to be a soap opera actress, a famous singer or a Medellín councilor, make an extreme change or get a lot of money to help the poor. At Christmas, they say, he donates almost everything he receives to street children in the city center.

At the beginning of this century, La Danny briefly moved her show from Bolívar Park, where, at that time, she appeared disguised as Wonder Woman, to an iconic bar called Vinacure.

She baptized her presentation as “Las cosas de Dios”, and between jokes and jokes she told anyone who would listen to her the times she was mistreated by the Police, when the priest of the Metropolitana tried to remove her from the atrium of the church (without success), the shot they hit her in the face, all the times she ended up in a dungeon and even the two times she was kidnapped, according to her, because they thought she was rich.

“I was very successful in Medellín, I earned a lot of money, but, unfortunately, my ignorance, my humility, made everyone cheat me, because they cheated me a lot and all my life I have suffered too much,” said Danny on Facebook Live

At the end of August, he made a virtual presentation of his works, from the streets of Medellín, on the social network of the theater Barra del silencio, where he acted, sang and presented various characters, many of them, he said, based on his own life.

“Despite being an artist, I had to work in hotels doing cleaning, I have always said it, I am a servant and a theater artist, I never believe myself more than anyone else, I have suffered so many humiliations from people, that all of them I hold on, because the words are blown away by the wind, “he said.

She confirmed that she was taken from her home as a teenager, that, a victim of homophobia, she was attacked with gasoline, that they tried to burn her alive and that one of her brothers, she said, tried to kill her with a machete. “That was very hard, but, today, he is my best friend, the most wonderful human being, the one who always asks for me, worries about how I am, I adore him and I forgot all the past.”

It was her brother, Sergio Castaño, who denounced her disappearance, said that the last time he had contact with her was last Thursday, that since then nothing has been known about the artist and that all search routes have already been activated in order to find her alive.

“We already went to forensic medicine and, fortunately, it is not there. We are reviewing the hospital network and the transport terminals, as they had told us that they had seen it in the North Terminal, ”reported the newspaper El Colombiano.

According to the media, the Somos Listas team and the Red Popular Trans collective have already reported Dany’s disappearance to the Urgent Search Plan of the Prosecutor’s Office, the Gaula, the Secretariat for Human Rights.

“We join the clamor for the search for La Danny, who is for us one of the artists and activists who best symbolize the struggle and resistance,” said the Museum of Antioquia on its official Facebook account.