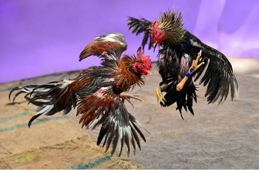 The Ministry of Sports and Recreation (Miderec) made the decision to suspend the rooster fights that were held virtually, following a recommendation in this regard made by the Ministry of Public Health.

The Miderec provision, which came into effect on Friday, November 20, is based on the “recurring” breach of the owners and tenants of galleras and arenas to the sanitary protocol that they promised to comply with.

The Ministry of Sports establishes, in a press document, that Public Health has recommended the cancellation of the permits granted by Miderec for the celebration of virtual cockfights, which were granted at the end of last September.

Given the constant violations of those permits, which at the time were granted by the Sports Ministry under the commitment of the galleras to fully comply with the protocol of the health authorities to combat covid-19, the authorized rooster fights were suspended. to be held virtually.

Miderec warns, in this sense, that any call for cockfights, in any establishment, will be considered a violation of the laws and regulations established by the national authorities to combat the coronavirus.

The cock fights in a traditional way are strictly prohibited since the arrival of the pandemic in the country.