Home>World>MINI is more, the iconic utility is updated to remain highly desired

Without any type of doubts, The MINI launched in 2001 has been one of the great “best sellers” in the automotive industry for the last 20 years. The recovery of the brand by the BMW Group and the staging of his first generation ran rivers of ink and immediately many customers rushed to buy it. The recreation of the original concept was just greathence its success for those users who wanted something different, equally exclusive, within a segment with much more conventional proposals.

Since then it has rained a lot. In 2014 the third generation of which we now know its second update was launched and that it is already for sale. The restyling has been practiced on the 3-door and 5-door bodies, as well as the cabriolet and the electric SE. The improvements made are not of great importance, but they are enough to show off a much fresher and more modern image that is greatly appreciated on the front through a much more stylized and marked grill, integrated turn signals and especially with LED optics for all versions.

The frontal image is the one that presents the greatest differences. On the right, the new model. MINI

Seen from the side it have changed the wheel arches and the range of rims, while behind, in addition to the new bumpers, what stands out the most is the position of the fog light integrated in the apron with a very satisfactory visual result. Another novelty has to do with the bicolor roof gradient from blue to black what is optional and what has a cost of 700 euros.

Inside, the refreshed MINI is also updated with various details such as the 5-inch digital instrumentation or the characteristic round multifunction display that is now 8.8 inches covered by a frame with a tonality that the brand calls “Piano Black”. Other components like the steering wheel, vents or interior lighting also adopt new features Without forget the handbrake that now, and as a novelty, is electric.

In the mechanical section, there is no news. Existing blocks are preserved, with powers from 75 to 231 hp, and the electric SE with 184 hp. Similarly, the decline of the range retains its denominations with the One, Cooper, Cooper S, John Cooper Works and Electric each one of them with its corresponding mechanics and manual or automatic gearboxes. 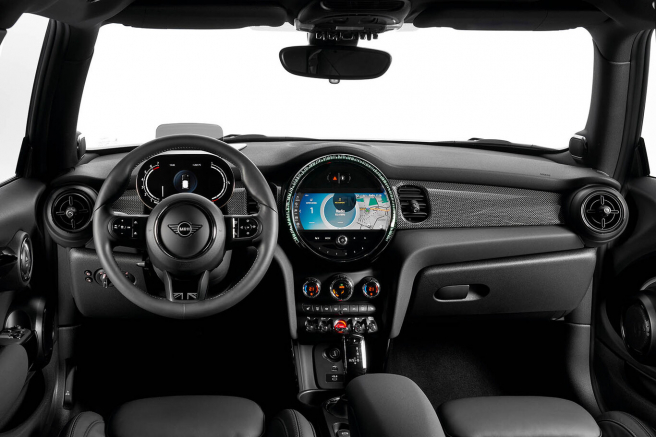 Inside, the new digital dashboard and infotainment displays stand out.

With prices starting from 22,300 euros, the MINI 2021 once again has all the ballots for remain one of the most charismatic and exclusive cars in its class until you get the fourth generation in which there will be a greater prominence of electrified versions. In fact, the brand has already announced that eIn 2030 all its models will be one hundred percent electric.