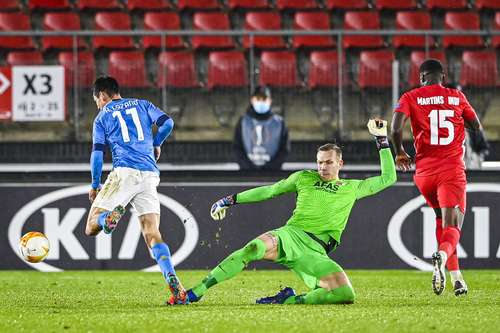 ▲ Mexican striker Hirving Chucky Lozano entered the exchange in the 61st minute with the Neapolitans.Foto Afp

Paris. Milan, Tottenham and Bayer Leverkusen qualified for the round of 32 of the Europa League yesterday, while Naples, where the Mexican Hirving Lozano plays, has not yet managed to make the pass.

The other qualifiers were Villarreal, Granada, Benfica, Glasgow Rangers, PSV Eindhoven, Slavia from Prague, Lille, Antwerp, Dína-mo from Zagreb, Red Star and Sporting from Braga. All of these teams join those that had already qualified last week: Roma, Leicester, Hoffenheim and Arsenal.

Milan reversed an early two-goal deficit to beat Celtic 4-2 to secure their place in the knockout phase, while Lille also advanced to lead the H sector by beating Sparta Prague 2-0.

In Group J, Mourinho’s Tottenham, meanwhile, added the point they needed to get into the round of 32 by drawing 3-3 against Austrian LASK, with a Gareth Bale penalty goal. The Spurs will play the top spot in the sector next week against Antwerp, also qualified.

Napoli missed the opportunity to seal their pass by drawing 1-1 with AZ Alkmaar and will have to look for their ticket on the last date of the group stage when they host Real Sociedad next week.

Dries Mertens opened the scoring for the Italians in the sixth minute, but Bruno Martins Indi equalized at 53. The Mexican Hirving Chucky Lozano entered the substitution in the 61st minute with a discreet performance.

In another Group F match, Real Sociedad also did not finalize their ticket by drawing 2-2 with Rijeka. Against a Croatian rival who had not scored any points so far, the Basque team even suffered to tie in the final stretch with a goal from Nacho Monreal (79).

With these results, Napoli leads the group with 10 points, followed by Real Sociedad, which has eight units, like AZ Alkmaar.

Villarreal became the first of the three Spanish teams to get their pass after winning 1-0 at Sivasspor in their fifth game in Group I. In addition, they secured the first place in the bracket after the 1-1 draw of the Maccabi in Qarabagh.

Granada also won the ticket, despite losing 1-0 at home to PSV Eindhoven, but the Spanish and Dutch benefited from the defeat of PAOK Thessaloniki in Cyprus.

To secure the first place in the E key, Granada will have to win in Thessaloniki or match the result of PSV, who will host Omonia Nicosia in Eindhoven.

Despite missing six players due to injuries, Bayer Leverkusen secured the pass with a 3-2 win in Nice. Also in Group C, Slavia Prague advanced by beating Hapoel Beer Sheva 3-0.

The already classified Roma and Arsenal won their matches again, quite the opposite of Leicester who suffered their first defeat in the tournament when they lost 0-1 in their visit to Zorya Luhansk of Ukraine.