A few minutes after starting our talk with Mike Rianda we understand why ‘The Mitchells against the machines’ is the madness that it is. It had been a long time since we laughed so much doing an interview. The Californian speaks at full speed, spouts a lot of ideas without stopping, makes a lot of references to pop culture and never loses his smile. From the moment we ask him about the spectacular reception the film is having on Netflix he starts joking: “I hate it! I want to hate it! Just kidding. It’s very good and it’s wonderful because we’ve worked on this for six years. . And who knows? We could have released it and people thought it was horrible. So I’m delighted that people have responded because I think our goal for the six years is that we try to fill it with as much love as we could, and from the script to the visuals, every corner of the screen has something“.

Rianda became known as a screenwriter for ‘Gravity Falls,’ the Disney cult series, but ‘The Mitchells vs. the Machines’ is her first feature film. In our interview he tells us about the challenge it entailed, being also a completely original film: “The fact that it was an original movie made it always on the verge of cancellation. ‘I don’t know … this doesn’t have Spider-Man!’“But he also takes the opportunity to thank Sony for the freedom they had all the time, and especially the role of Phil Lord and Chris Miller, who more than producers were their squires and who did everything possible to make any idea, no matter how crazy. out, it ends up in the movie.

The main family draws a lot of inspiration from Rianda’s own family, and admits that the first time he put the film on them he was quite concerned about their reaction: “I was never more afraid of any audiences than when I showed it to my family. They are very tough critics, apart from it being a bit about them, I was very nervous, but they really liked it. My father texts me saying ‘Mike, I’ve seen her four times and I’m still crying, I don’t know what’s wrong with me.’ And my mother became a TikTok and she’s been promoting it: ‘Subscribe to my TikTok. I’m Michael’s mother! ‘And I say,’ Mom, I don’t think people know who Michael is. ‘“. We also talked about that scene that has so marked the public, in which the protagonist, Katie, reflects how much the movies have helped her in moments of loneliness:” I think animators are created … Do you remember that mutagen falls on the Ninja Turtles and they become the Ninja Turtles? Loneliness falls on us in childhood and we become entertainers. “

“If you say ‘Fortnite’ the screen explodes”

‘The Mitchells against the machines’ has a very current style and does not shy away from the culture of the meme, which could have actually been the nail in the coffin for the film, as Rianda himself explains: “We tried to use very current memes and they felt like poison on screen. If you say ‘Fortnite’ the screen explodes and the negative starts to burnSo they tackled the problem of memes and trying to make the film as timeless as possible: “We just thought about how each character would communicate, and how they could communicate in such a way that anyone who was in the cinema could understand it. And this is how we end up using some of the memes that we use. It is difficult and there are people who believe that we have not achieved it. But we have done what we can. ”That idea of ​​thinking about how the characters would communicate also led them to use what they call ‘Katie Vision’, which permeates the entire film of the editing style of the protagonist’s shorts: “What if the logic of his films was rubbing off on our film? Because she is the one editing the film. So you get more of Katie’s personality in the movie. “ 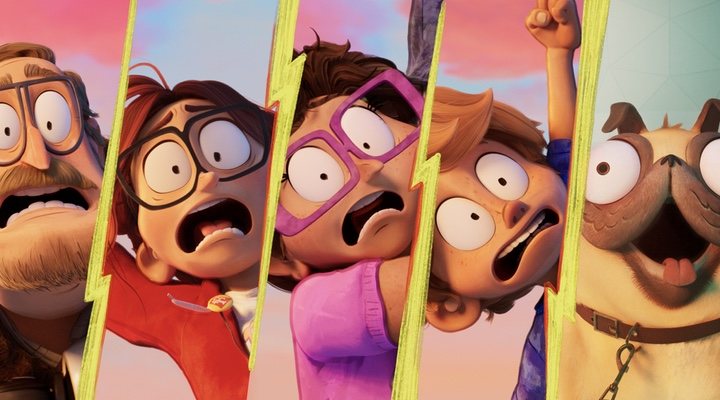 In the interview we also talked about the dubbing of the film, especially Olivia Colman and her wonderful villain, why she liked the original title more than ‘Connected’ that Sony wanted when it was going to be released in theaters, the language Hidden from robots, crossovers and a possible sequel to the terrifying Furbyverse: “It’s made up entirely of Furbys. You go to a store and the guy behind the counter says ‘mamamamama’. The president does ‘mamamamama’. They would just be Furbys and they would have to learn furbish to get out of the mess“, imagine. And although Mike Rianda assures that after six years” he should be resting “, he is already planning the next, always related to that absolute passion that he shows for animation:”I have an idea for a movie and an idea for television, and they all try to take animation further. I love animation, more than any human should love it, and all I want to do is make animated movies and experiment with the format while telling entertaining stories that also have something to say.With ‘The Mitchells and the Machines’ he’s done it. Wanting to see what next madness comes out of his head.

‘The Mitchells against the machines’ is now available on Netflix.