Miguel Oliveira has conquered the pole of the Portuguese GP, home race for the KTM Tech 3 team rider. With a time of 1: 38.892, the Portuguese has achieved the first pole of Portugal in MotoGP, all after beating Franco Morbidelli by 44 thousandths. In a classification that was not decided until the last gasp, Jack Miller finished in third position to close a 100% satellite front row. Maverick Viñales is the best Spanish rider on the grid after beating Pol Espargaró. The champion Joan Mir will start from the bottom of the peloton after not his discreet role in Q1.

Despite finishing second last, Franco Morbidelli was forced to go through Q1. The Italian pilot did not fail in any case in a session that began with a long delay due to the incidents prior to the dispute. However, ‘Morbido’ did not get the best time either since Cal Crutchlow set the benchmark record in Q1 after signing a time of 1: 39.250. With the two tickets for Q2 resolved, Brad Binder, Aleix Espargaró and Pecco Bagnaia shared the positions of the fifth row of the grid. For its part, Joan Mir will start 20th after a gray classification. 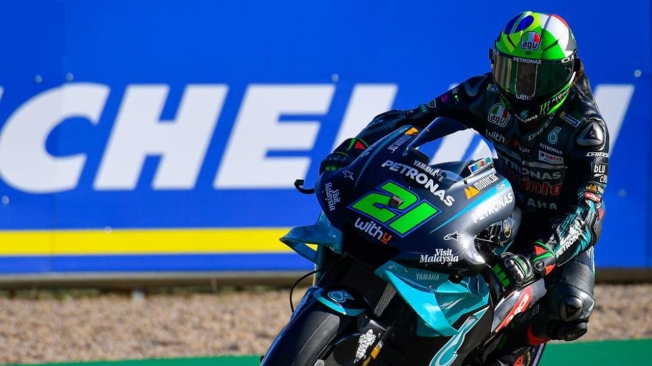 Franco Morbidelli and Jack Miller completed the first row of the grid at the MotoGP Portuguese GP.

Q2 started with different alternatives, although it quickly became clear that pole was to be decided between the satellite drivers. And among this army of ‘rebels’, the local hero did not miss the opportunity to make history. However, Miguel Oliveira conquered his first pole in MotoGP after signing a 1: 38.892, also conquering the first pole of Portugal in the premier class. Oliveira managed to celebrate this success at home after beating Franco Morbidelli by 44 thousandths, resigned to repeating the same position he had achieved in Q1. For its part, Jack Miller set the third fastest time of the session.

Cal Crutchlow was less than a tenth of sneaking into the front row, all after beating Fabio Quartararo. For its part, Stefan Bradl signed the sixth best record, being the first official rider on the grid to compete with Marc Márquez’s Honda RC213V. Despite breaking an engine before the start of Q1 and having a crash in Q2, Johann Zarco managed to save seventh place ahead of Maverick Viñales and Pol Espargaró. For its part, Álex Rins, Takaaki Nakagami and Andrea Dovizioso have divided the fourth row of the grid after occupying the last three places in Q2.

Results of the 2020 MotoGP Portuguese GP