Migbelis Castellanos is one of the attractive stars of Univision who steals sighs in each of the appearances he makes on the television network’s screens. Although it is true that she is very reserved with her personal life, the Venezuelan star was previously engaged to a famous athlete.

Before settling in the United States, Castellanos lived a love story in her native Venezuela when she became engaged to baseball player Francisco Cervelli in December 2016.

According to information reviewed by El Impulso, the couple met in 2014 in the city of Miami and got engaged after two years of love affair.

Here is everything you need to know about the love story of Migbelis Castellanos and Francisco Cervelli:

The couple had a considerable age difference when announcing their engagement

At the time of getting engaged, Migbelis Castellanos was 19 years old, ten years younger than Francisco Cervelli, who at that time was 29 years old.

Before confirming their commitment, the couple was living their romance in their native Venezuela, a country where they were besieged by the main media that suspected of the love relationship. However, Castellanos and Cervelli never provided information to the press about their engagement.

Noticias 24 reported that the couple got engaged during a family reunion that was held in December 2016 in the city of Cabimas in the state of Zulia in Venezuela, the place of residence of the relatives of Migbelis Castellanos.

During the engagement proposal, Francisco Cervelli surprised Castellanos with a ring that featured a striking purple diamond.

Migbelis Castellanos announced the cancellation of his engagement

In June 2018, Migbelis Castellanos announced the cancellation of her engagement with baseball player Francisco Cervelli, with whom she had a love affair since 2014.

In an interview with the television show “Chic Al Día” on the EVTV Miami television channel, Castellanos confirmed that she was single after ending her engagement with Cervelli.

In July 2020, the Venezuelan beauty queen declared HOLA! USA that the breakdown of her engagement could be related to a lie that involved her sentimental partner: “There was like a lie. I can’t tell if he was unfaithful to me. He never said it and I have no evidence to say that he was. But there was a lie out there that had to do with infidelity and I am very radical ”.

Who is Francisco Cervelli?

Francisco Cervelli is a 35-year-old former Italian-Venezuelan baseball player who was part of prominent professional teams such as the New York Yankees, the Pittsburgh Pirates, the Atlanta Braves and the Miami Marlins.

The Players Bio website reported that Cervelli’s net worth is valued at $ 35 million from his contracts with the top sports teams in the United States.

At the beginning of October 2020, Francisco Cervelli announced his retirement as a professional baseball player after 13 years of experience in Major League Baseball. 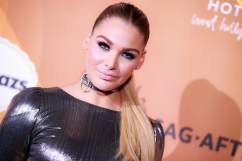