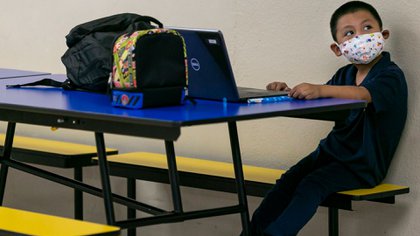 Sarai Machic, 8, in her class at Miami Community Charter School. (.)

The situation with COVID 19 in South Florida is not good. The curve continues to rise. This Thursday 2153 new cases were confirmed, for a total of more than 352 thousand people infected in the county since the pandemic was declared, and 14 new deaths totaling 4,644 deaths. Although the peak occurred in the summer, since November the situation has been getting worse.

That does not imply that society is closing. Businesses are still open, restaurants, bars and even discos are open. Tourism is welcome. With certain restrictions, such as the request to use masks and social distance. But Miami is open.

And as it could not be an exception, the classes are still standing. After a complicated end of the year, with virtual classes, the schools reopened in person. Unlike what happens in other parts of the country, in Miami-Dade classes are open to all.

“We have been advised by experts in public health. We have assembled a committee of experts in pediatric medicine and immunology. We are in good hands and that has resulted in a series of protocols that leave very little room for us to doubt”Alberto Carvalho, the Miami-Dade superintendent of schools, explained to national television.

The protocol involves the following steps:

“We get used to always being inside the classroom. Before we used to go out to play in the yard, but now everything is within the same class (…) it is still more entertaining than being at home ”, I was telling . Emma, ​​age five.

“The only thing that really changed is that we have to have the mask on, but I’m used to it now”added Ethan, seven, of Coconut Grove Elementary School. 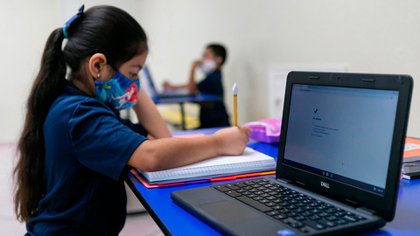 The children wear masks, maintain social distance and carry out all the activities in their classroom.

“The truth is that studying at home didn’t work for me. I never thought I was going to say this, but I missed coming to class and now I value it more”Reflected Jason, who is in middle school at the Institute for International Studies, a charter school in Little Havana.

Every time a child, or a school employee, reports ill, an immediate quarantine of the entire class is required.

“My daughter is in preschool. Because they are so young, they only interact with the children in their class. They have only one teacher, so there were few opportunities in which he was in contact with someone who later turned out positive. But in the higher grades, when they change their classmates for different activities, it happens more often that they have to stay at home for a few days because someone in the classroom has the virus, “he told . Amalia Cuevas, a Colombian mother who lives in the Coconut Grove area.

“The biggest problem I have seen is with the after-school (parents can opt for an after-school program to pick them up at 6pm). This is where they interact with children from many grades, and someone is always going to catch it. So I decided to go to class and get home early. So far only once has happened to us that he had to stay in quarantine”Explained Paula Romero, mother of a seven-year-old girl at Pinecrest Elementary School. 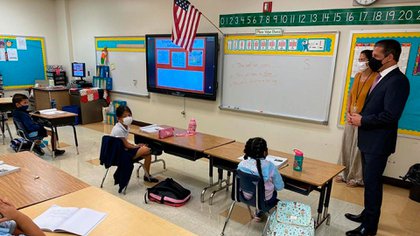 If a sick student or teacher is reported, the entire class is quarantined. But the cases have been few.

“My biggest fear is that at some point they will close again. I have a small child and a teenager. The months at home were terrible for both of them. The little one could not concentrate on virtual classes, and the older one became depressed without seeing friends, without socializingr ”, assured Tomás Beaver, father of a five-year-old boy and a 16-year-old boy.

Private schools each have their own protocol, which follows the bases of what is established by the public system and includes other possibilities, such as special air filters or UV lights to disinfect the classrooms.

While the situation with the virus remains worrisome, the consensus seems to be that schools should remain open. Parents who are not comfortable sending their children to class have the option of voluntarily opting for a virtual system.

Joe Biden presented his strategy against COVID-19: all people arriving in the United States must present a negative test and quarantine