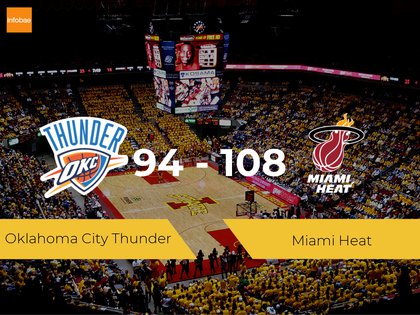 Miami Heat managed to win away from home Oklahoma city thunder 94-108 on a new NBA day. Previously, Oklahoma City Thunder players won on the road against Cleveland Cavaliers by 101-117. For their part, the Miami Heat also defeated away from home Los angeles lakers 94-96, so after the game they accumulated four wins in a row. Miami Heat, with this result, it is tied to games won with the Play-off positions with 14 victories in 31 games played, while Oklahoma city thunderAfter the game, he would remain out of the Play-off positions for the moment with 12 victories in 31 games played.

The first quarter had as protagonist and dominator Miami HeatIn fact, the team achieved a 15-2 run and had a maximum difference of seven points (14-21) and finished with 21-23. Later, the second quarter was characterized by different leader changes on the scoreboard until it concluded with a partial result of 33-22. After this, the players reached the break with a 54-45 on the scoreboard.

During the third quarter Miami Heat managed to overcome the result, in fact, the team achieved a partial in this quarter of 14-2 and reached a difference of seven points (72-79) and finished with a partial result of 23-34 and a 77-79 overall. Finally, in the last quarter the visiting team managed to distance itself in the light, came to win by 18 points (79-97) and the quarter ended with a partial result of 17-29, thus ending the duel with a result 94-108 final in favor of the visitors.

After winning this match, the next clash of Miami Heat will be against Toronto raptors at American Airlines Arena. For its part, Oklahoma city thunder will face San antonio spurs at Chesapeake Energy Arena.