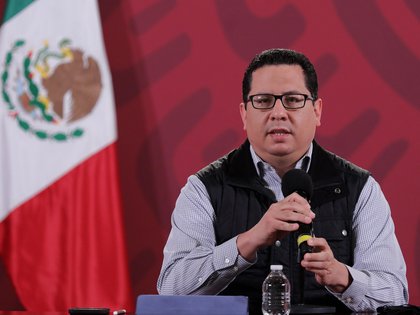 Photograph given this Saturday by the Mexican presidency, where the director of Epidemiology of the Ministry of Health, Jos Luis Alom a, is observed during a press conference at the National Palace From the capital. . / Presidency of Mexico

Mexico, Nov 21 . .- Mexico registered 550 new deaths this Saturday from the covid-19 pandemic, bringing the number of fatalities to 101,373, reported authorities from the Ministry of Health.
In addition, in the last 24 hours, 6,719 new infections were registered, for a total of 1,032,688 confirmed cases.
With these figures, Mexico remains the eleventh country with the most infections and the fourth with the most absolute deaths, according to Johns Hopkins University.
In addition, with almost 785 deaths per million inhabitants, Mexico is the tenth country with the most deaths in proportion to its population.
In the daily technical report of the pandemic, increases of 0.54% in deaths and 0.65% in infections were confirmed, in contrast to the figures of the previous day, when 100,823 deaths and 1,025,969 infected were reported.
Since the beginning of the pandemic, on February 28, 2,684,780 patients have been studied in Mexico who had a positivity rate of 43%, reported the director of Epidemiology of the Ministry of Health, José Luis Alomía, at a press conference in the National Palace.
Among the group of patients studied are 1,032,688 who had a positive for the viral infection, 1,259,975 with a negative result and 392,117 who remain suspected cases.
Suspected cases are classified by the health authorities among those who do not have a sample (191,489), those who have no possibility of having a result (118,322) and those who wait to know the diagnosis of their test (82,306).
The official responsible highlighted that 774,930 patients are classified as recovered persons.
The projections of the Mexican authorities indicate that at the moment there are 1,197,540 estimated cases in the country and they indicated that 3% of the estimated cases, corresponding to 41,480, are those that represent the active epidemic in the country, as they are patients who developed their symptoms in the past 14 days.
The report indicated that the health authorities currently have 15,566 suspicious deaths that are classified as those without a sample (10,633), those that will not have a diagnosis (4,273) and those that can (660).
Mexico is nine days away from closing the sixth month of the so-called “new normal” stage, which began on June 1 and which operates based on a four-color epidemiological traffic light that regulates the opening of economic and social activities.
On Friday, the authorities indicated that for the next two weeks, of the 32 states of Mexico, 14 states will be in orange (high risk), 14 in yellow (medium risk), 2 in red (maximum risk) Chihuahua and Durango, and only two in green (low risk) Campeche and Chiapas.
In the eight months of the pandemic in Mexico, covid-19 has established itself as the fourth leading cause of death in the country, behind heart disease, diabetes and malignant tumors, according to data from the National Institute of Statistics and Geography (Inegi).