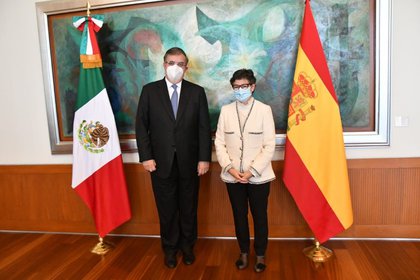 The Minister of Foreign Affairs of Spain, Arancha González Laya, avoided this Tuesday during her visit to Mexico to present an apology for the Spanish conquest in the country 500 years ago and has insisted on the need to build bilateral relations “on the past, but looking to the future”.

“We have been very transparent from the beginning, Spain has had a reflective and critical look throughout its history, it has not waited 500 years to have it”, pointed out González Laya, who has confirmed the participation of Spain in the ephemeris by the 200th anniversary of the independence of Mexico.

“As a result of this reflection, we present ourselves to this celebration. We think it would be tremendously useful to raise it in terms of what we want to do for the next 50, or 100 years, and I think we want very similar things, which we have learned from our 500 years in common “said the minister during a meeting with the press after meeting with his counterpart, Marcelo Ebrard, in Mexico City.

On the occasion of the previous Columbus Day, the president of Mexico, Andrés Manuel López Obrador, again urged the Spanish authorities to apologize to the indigenous peoples for the “imposition” and “looting” of the conquest.

“It is important that what happened be known, he stressed, because there is an” official history “and also” another vision, that of the defeated. “The conquest as a” civilizing “force in America is only” an ideological justification to cover up the imposition and looting “.

For his part, González Laya has insisted on the need to “build on the past, but looking to the future”, since both countries currently share common interests, such as the protection of Human Rights, public liberties, minorities, and for the women victims of femicides and violence.

We must “promote relationships for the future. Imagining ourselves not how the last 500 years are going to be, but how we want the next 50 and 100 years to be,” he emphasized.

In relation to the next Ibero-American Summit that will take place in Andorra next April, González Laya has shown the interest of Spain to be present, as that would mean that the coronavirus pandemic has been controlled.

The Foreign Minister has valued this type of meeting between “the Ibero-American family” to boost their relations and ties around a common project, which this time focuses on economic recovery, after the COVID-19 crisis.

The situation of Spanish companies in Mexico has been another of the points that González Laya has addressed, after the sector has shown some concern about possible changes in the legislative frameworks in which they have been operating so far.

In this sense, the minister has said that Spanish companies have asked for her “support” and although Spain, qualifies, “respects” any possible regulatory changes that may occur in some sectors, such as energy, it also understands that they must be “clear, transparent” and offer “legal certainty so that these companies can continue to contribute to the growth” of Mexico.

“I have spoken about Spanish companies and I have valued their work in this country and the importance of making that value visible in Mexican society,” said González Laya in reference to the meeting he had with his Mexican counterpart, Marcelo Ebrard, and the Minister of Economy, Graciela Márquez Colín.

“We have talked about the importance of jointly adding value to these companies,” both the Spanish in Mexico and the Mexican in Spain, he insisted, “and that we seek to facilitate the performance of their function to help overcome this crisis. soon as possible”.

TRADE AGREEMENT BETWEEN THE EU AND MEXICO

Given the possibility that the signing of the trade agreement between the European Union and the López Obrador government could be delayed due to the lack of significant changes in energy and climate change, the Foreign Minister explained that “the issue is not that Mexico change its legislation “, but rather that” the rules that are applied are clear and offer legal certainty. “

“We respect the changes in energy legislation in Mexico. The question is not that they change their energy legislation, but that the rules are clear, transparent, and offer legal security to investors, both foreign and domestic. That is the message from Spain and the European Union “, he asserted.

“Both on the part of Mexico and the European Union there is great interest in promoting this trade agreement,” said González Laya, who considers that “the commitments in terms of transparency, security, and transparent rules of the game” present in this pact they can serve as a “lever to contribute to investment and trade diversification”.