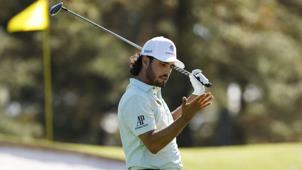 Mexican Abraham Ancer joined the group of four leading golfers at the Augusta Masters on Friday, next to world number one, Dustin Johnson, in the second round of the tournament, who had to be suspended due to lack of light.

Ancer and Johnson are tied with American Justin Thomas and Australian Cameron Smith at 135 strokes, nine under par, with 48 players remaining in the second round starting at 07:30 local time (12:30 GMT) on Saturday.

The Spanish Jon Rahm, world number two, had to interrupt his course with six holes to go when he was giving an exhibition with five birdies that placed him at eight under par.

The American Tiger Woods, the defending champion, was in joint 22nd place, with four under par and eight holes pending on the second day.

The Masters schedule continues to be affected by the almost three-hour suspension of the game on Thursday morning due to rain, which meant that the first two rounds could not be finished on time.

The surprise on Friday was given by the rookie Ancer, 29 years old and without any victory on the PGA circuit, who in the morning concluded the first round with 68 strokes, four under par, and then continued playing the second in which, despite Starting with a bogey on the 10th hole, he rose to the co-lead thanks to six birdies on holes 12, 14, 16, 2, 6 and 8.

“Today was a bit strange because I played 25 holes,” acknowledged Ancer