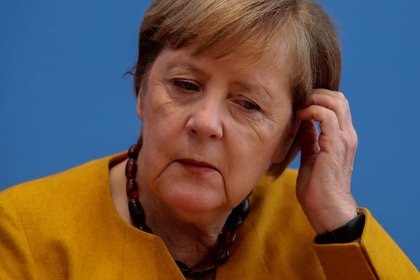 BERLIN, Nov 17 (.) – The coronavirus situation in Germany remains very dire, although infection figures are no longer rising as rapidly, Chancellor Angela Merkel said on Tuesday, after federal and state leaders postponed until the 25th. November the decision to apply new confinement measures.

Merkel said she would have preferred to agree to the new measures at Monday’s meeting, adding that she was very concerned about the uncontrolled spread of the coronavirus in some places, including the country’s capital Berlin.

The number of confirmed coronavirus cases rose by 14,419 in one day, according to data released Tuesday by the Robert Koch Institute (RKI) for infectious diseases, while the number of deaths rose by 267.

Merkel pointed out that between 30 and 40% of the German population is vulnerable, including the elderly and people with health problems.

“Controlling the pandemic is also the best solution for the economy,” he said.

Germany imposed a month of lockdown on November 2 to try to curb the second wave of the epidemic, which is hitting much of Europe. Bars and restaurants are closed, but schools and shops are still open.

Merkel has proposed additional measures, including making it mandatory to wear masks in schools and reducing the number of students per class, and has urged citizens to limit social contacts.

The chancellor reiterated that the seven-day incidence of the virus must fall below 50 cases per 100,000 inhabitants before a serious reopening can be contemplated. Germany currently has 141 cases per 100,000 residents, according to the latest RKI figures.