The first electric models from Mercedes-Benz are taking advantage of the existing platforms of other combustion vehicles while waiting to have their electrical architectures fully developed. Since they don’t want to sleep the Germans are adapting those of their current cars so that they can incorporate the battery. And that is the case of the new compact SUV that is launched these days, the EQA, what is based on the popular GLA, of which a plug-in hybrid version already exists. This variant became the most sold tourism in Spain in 2020 with this type of motorization.

The first version, and for the moment only, of this 100% electric EQA that begins its commercialization these days is the so-called 250. It is equipped with a 190 horsepower (140 kW) engine, to exclusively drive the front wheels, and a battery with 66.5 kW gross capacity. With it, you have autonomy in the WLTP homologation combined cycle of up to 426 kilometers, which if carried out only in an urban environment can increase up to 494 kilometers.

The final price of the Mercedes EQA 250 in Spain is 49,900 euros, not including the aid of the Plan Moves. As an introductory offer, the brand gives a three-phase wallbox with the cost of the installation included, as long as the assembly does not have a special complication that exceeds 80 meters of wiring, approximately. With it, you can fully charge the battery at home in less than six hours. Although the wallbox allows charging at a power of 22kW with alternating current, for now the EQA only supports a maximum of 11 kW. 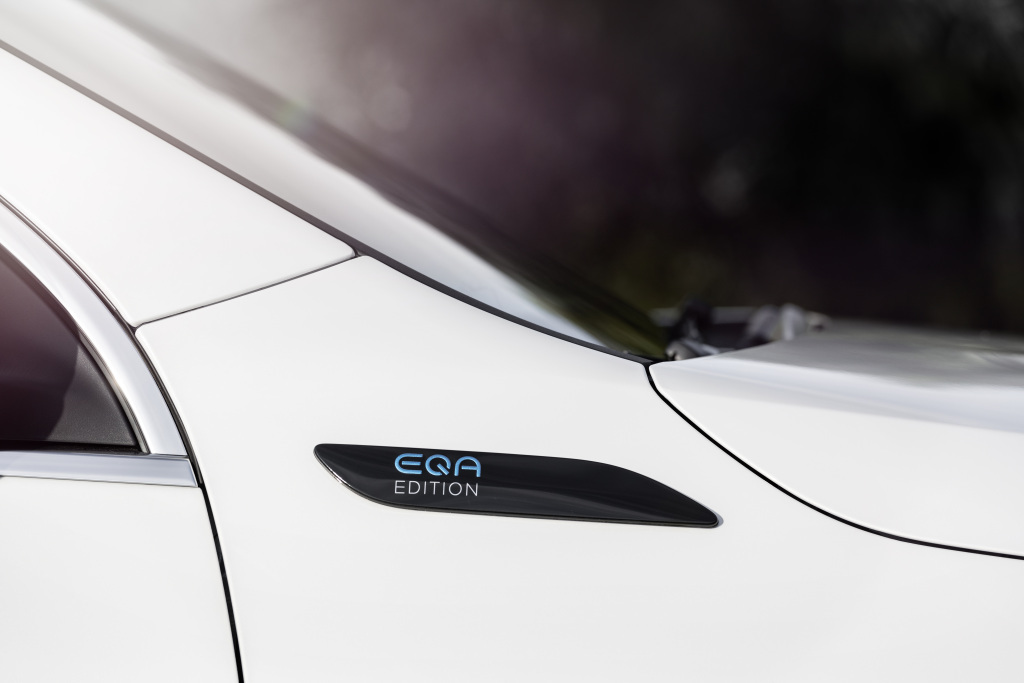 Standard equipment includes two cables for alternating current, one of the Mennekes type and the other Schuko, which are the most widely used standards in Europe. If we use direct current fast chargers, which are already becoming popular in some cities and on the main Spanish roads, the EQA supports up to 100 kW of power, which supposes the time to fill your battery up to 80% can be reduced to 30 minutes. 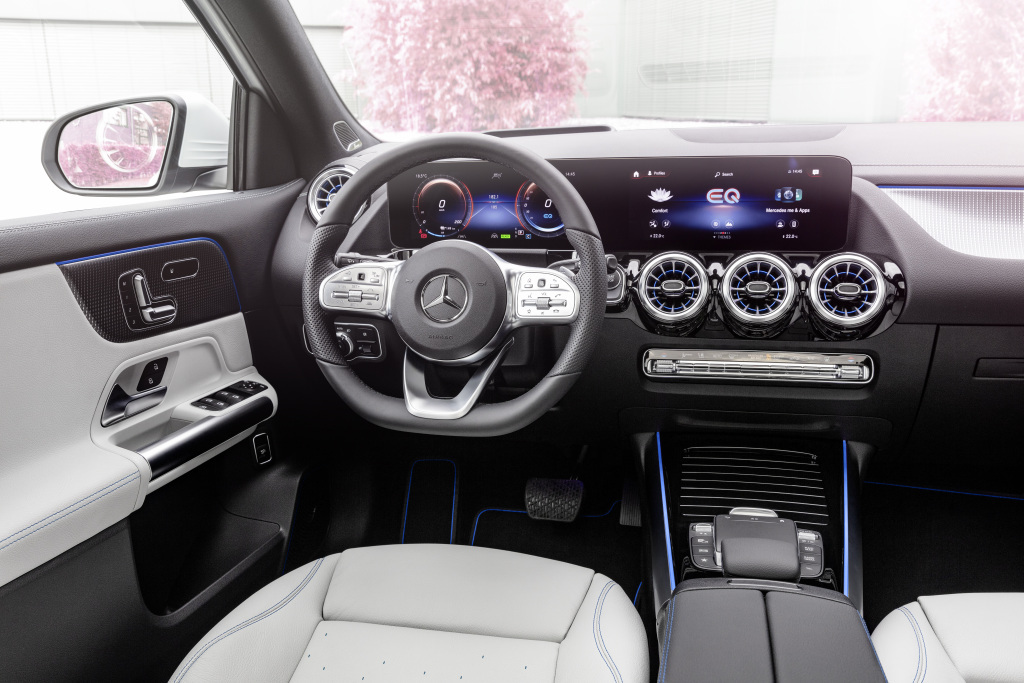 Regarding the GLA model that it takes as its base, its dimensions are practically identical, which translates into a similar interior space, but with certain differences in the way the rear seat occupants sit. In the electric, the bench is closer to the ground (raised to dock the battery) and that brings the knees to a higher position. Where if you lose something the EQA is in boot capacity, which goes from 435 liters to 340. 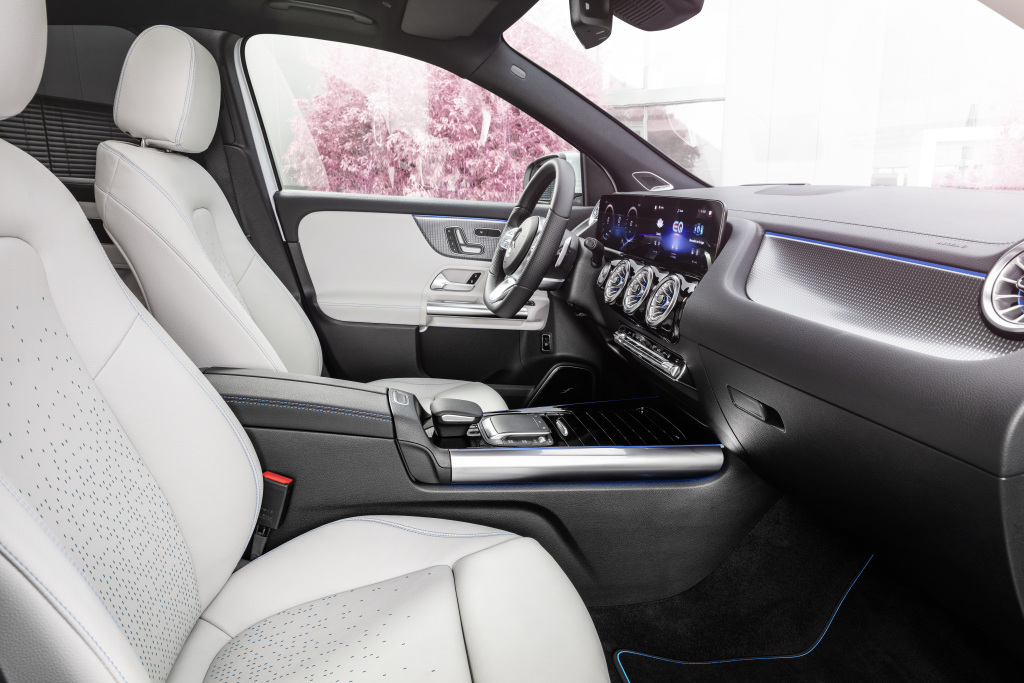 Except for these details, both cars share the same interior design, in which the two configurable digital displays that are already traditional in modern Mercedes, joined under the same glass that goes from the left side to beyond the center of the dashboard. The standard ones are 7.25 inches each and optionally that size can be expanded to 10.25 inches.

GLA and EQA also share safety assistants and driving assistance, as well as the MBUX information and entertainment systemexcept for some specific details intended only for the new electric vehicle. For example, in this last model, the browser has the function Electric Intelligence, which calculates the fastest route to the destination taking into account factors such as cargo needs, terrain orography, traffic, and even the selected driving style and mode. Is a help very necessary for trips with electric cars, since the greatest concern always revolves around autonomy, the places where we can load and the type of chargers available, since the time that we are going to spend at each stop depends on it. 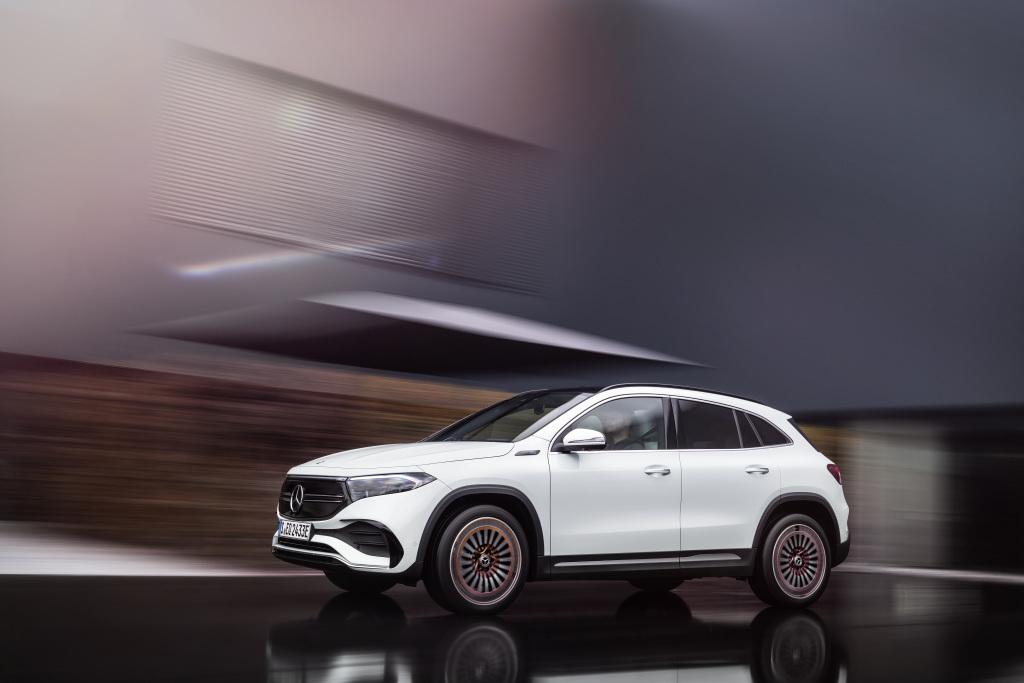 That is why the application is also very useful Mercedes me charge, which includes more than 450,000 charging points in 31 countries of Europe. Many of these energy providers already support online payment with the mobile itself. In addition, the brand has acquired the commitment that the recharges made in its cars through the app in 175,000 of those points will be compensated with the equivalent contribution of energy obtained from renewable sources.

Dynamically the new Mercedes EQA is pleasant to drive. To the running silence typical of electric vehicles is added good filtering of rolling noises and precise steering feel. On motorways and roads with little twist, we will not appreciate great differences with its combustion brother. Agility is somewhat lower in curves due to its 2,040 kilograms of weight. Although they are well compensated with a center of gravity situated at a low point, when the turns occur that extra that appears on the scale is more noticeable. 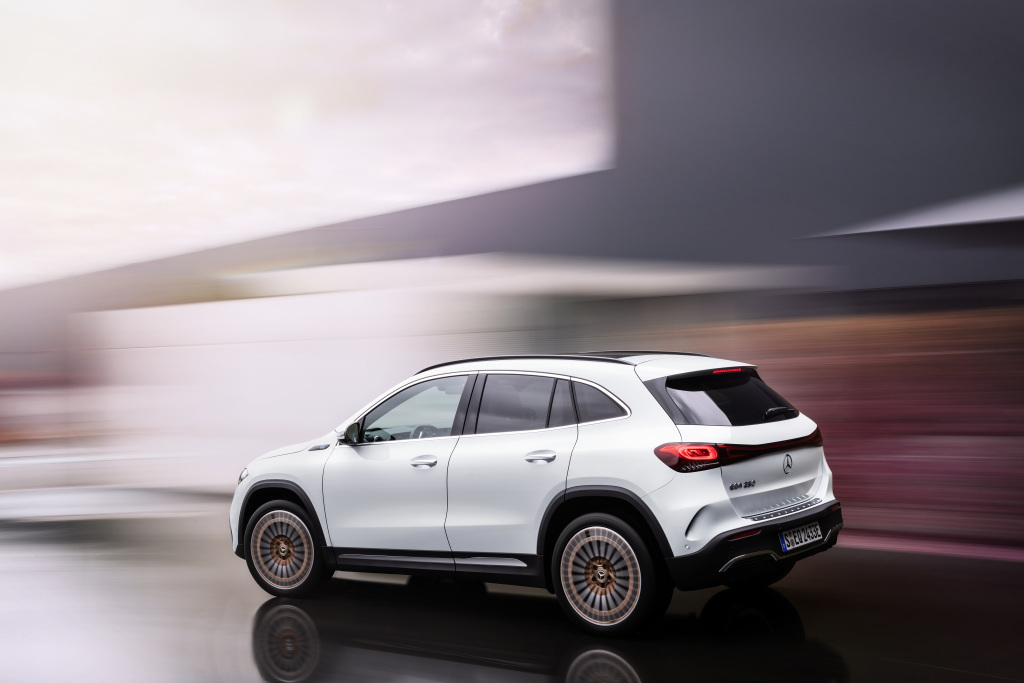 Mercedes’ compact SUV carries paddles on the steering wheel similar to those used for shifting gears, but in this case the function is different. With the left, which is usually used to reduce speed, increase engine retention and allow the battery to charge more, while with the right the opposite effect is achieved. There are four levels, from zero engine retention to the maximum, which makes it easy to drive practically without touching the brake, since in most of the time, just take your foot off the gas pedal and the car will come to a stop.

Acceleration is good combining those 190 horsepower with the immediate delivery that electricians make of it. To go from 0 to 100 km / h it takes 8.9 seconds, a mark that without being surprising is more than worthy. The top speed is electronically limited to 160 km / h (From there consumption will skyrocket) in all modes except the Eco, where it does not allow to go above 130 km / h. 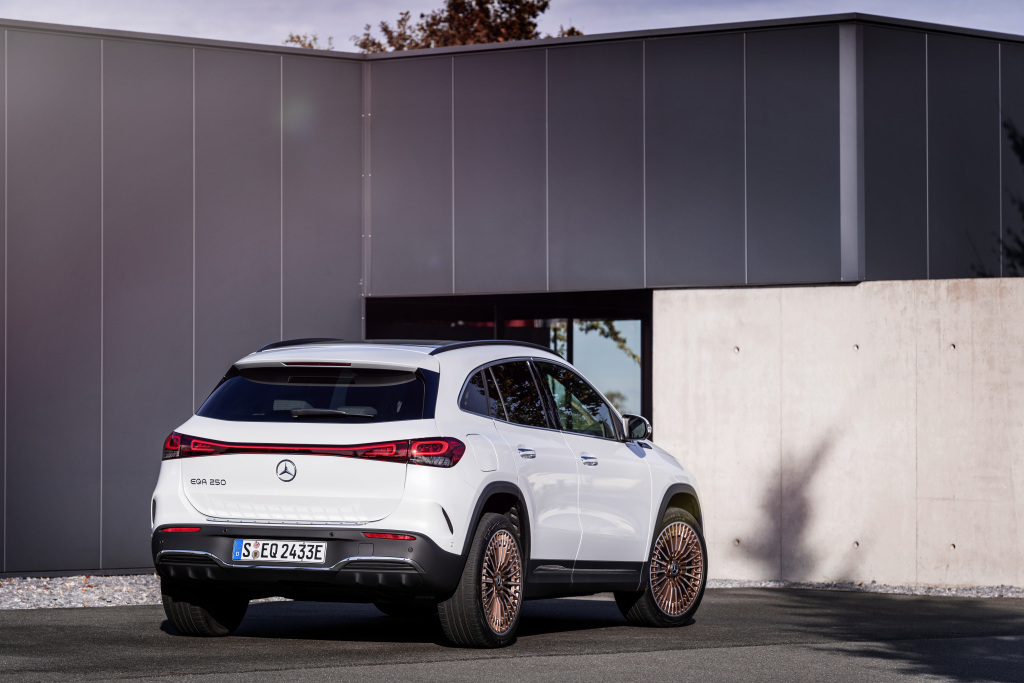 A little later, in a period that has not been disclosed, two more versions will arrive for this Mercedes EQAboth with front and rear motors and, therefore, with 4Matic all-wheel drive. The joint power to rise in one case to 228 horses and 292 in the other. A higher capacity battery will also be offered for which an autonomy of more than 500 kilometers is announced.

Mercedes has proposed to be a leader in electrification, something that it already achieved in Spain in 2020 by being Top-selling brand of plug-in hybrids and 100% electric vehicles, with 5,054 units. By 2030, they forecast that half of the new cars they deliver to customers will be free of polluting emissions. And the commitment is to reach 100% by 2040.

Still, for now still there is room for lovers of pure sports cars with a combustion engine. Mercedes has announced that the new SL coup will be offered only under the AMG name and without any hybridization. Surely, it will end up being a sought-after item by collectors.