The market SUV It does not stop growing, expanding its sights and its possibilities thanks to a demand from customers that does not stop increasing either. Mazda knows this, which is why its SUV offering has multiplied exponentially in recent years. One of its pioneers, the Mazda CX-5, has passed through our hands for a thorough test.

The history of Mazda cx-5 It is already the history of an almost dean model in our market. And it is that the first generation of the Japanese SUV saw the light in 2012 in response to a growing demand for mid-size SUV vehicles. Mazda was quick and decided to bet heavily on this segment, which is now one of the most popular in the entire market. 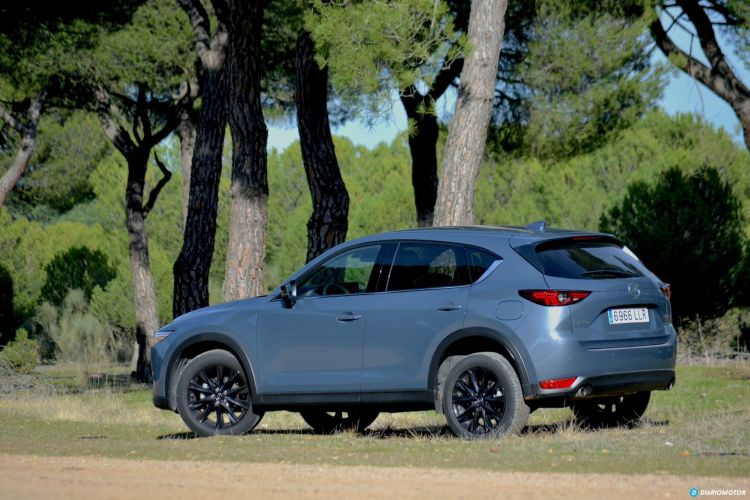 The current Mazda CX-5 dates from 2017, but in 2020 it underwent a deep update which substantially improved its qualities, making the CX-5 one of Mazda’s best-selling models. What’s more, earlier this year he improved again with slight details as a new multimedia system that we will talk more about later.

Starting our analysis on the outside, we find a body of 4.55 meters in length, 1.84 m in width and 1.68 m in height, which features a fully recognizable Mazda design. Without a doubt, the part that attracts the most attention is its front, which, at least to me, seems the most graceful part of the whole set.

Its front is aggressive and sporty, but at the same time it is clean and minimalist: a large front grill With a logo of generous dimensions, it is shown accompanied by sharp and elongated optical groups, with a very representative light signature that inevitably reminds us of other models of the brand such as the Mazda3.

In general, the lines of the bodywork of the Mazda CX-5 seem right to me, since they seek a balance that they manage to find by combining marked lines – as we have already seen on the front – with smooth and fluid surfaces. On the back there are small details such as the light clusters, very thin and elongated, which work very well.. 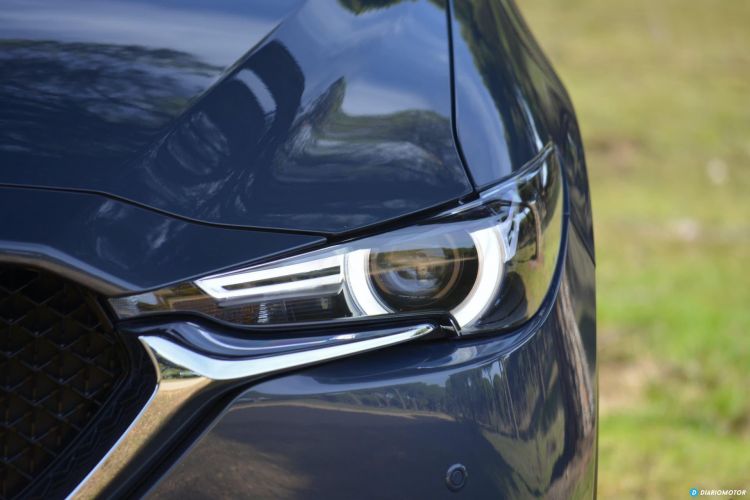 The interior of the Mazda CX-5 exudes solidity

If we look now at the interior of the Mazda CX-5, the word that best defines it is that of solidity: even the design of the surfaces is thought to be robust to the eye thanks to its smooth lines but. Straight, well-organized surfaces and visible controls, with a solid and refined touch – once again -.

Build quality is more than correct: We already know Mazda’s eagerness to place its products a step above the rest of generalist manufacturers, an eagerness that is evident when we put our eye – and touch – on the different parts that make up the cabin. The vast majority of surfaces such as the top and center plates of the dashboard, the central console or the upper panels of the doors -the 4- are padded, something that does not happen in almost any model of generalist cut. 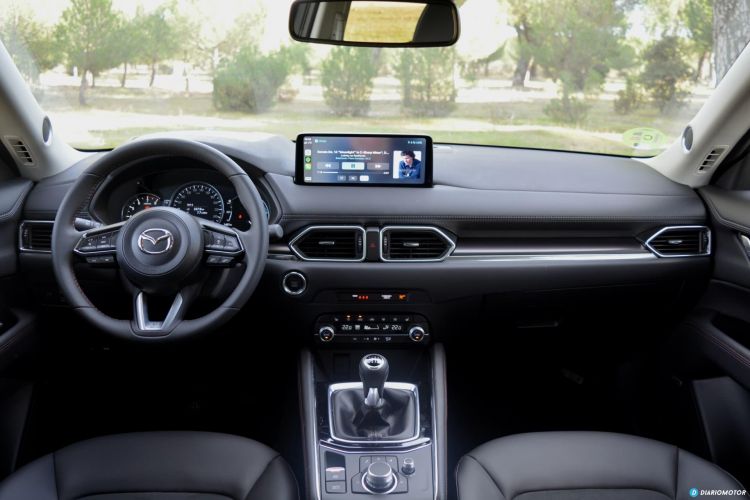 What’s more, Mazda has wisely placed soft surfaces where we are going to support our hands and arms intensively, so that the central and door elbow rests are soft and very soft. The decoration may be a bit serious, but it is true that in this special version the red stitching provides an extra touch of very pleasant color.

On the other hand, Mazda has recently updated the multimedia system of the CX-5, which now adopts the same 10.25 ”screen that already equips the Mazda3., a screen with an excellent resolution that, however, can be somewhat confusing to handle since it can only be operated through a joystick-type central control. The instrumentation is maintained with a large central screen that, from my point of view, does not contribute anything to greater than what a conventional instrumentation could provide. 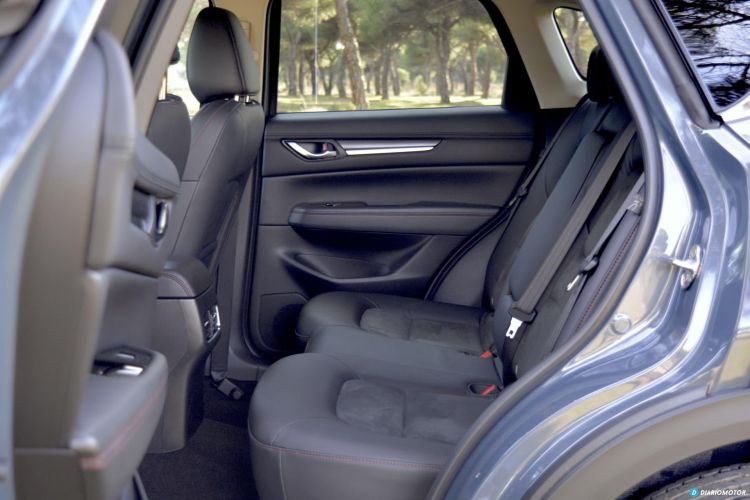 The space on board is correct, with good width both in front and behind, so that four adults will travel in total comfort inside. Furthermore, lthe rear offers certain “amenities” to its passengers such as air vents, USB sockets to recharge mobile devices or a reclining backrest in two different positions.

The trunk, for its part, has electric opening and a cargo space of 477 liters with the rear seats in their standard position. It is a sufficient capacity, but it is not, by far, the best in the segment since most of its alternatives have a larger trunk. The forms, yes, are regular and capable.

We get going with the Mazda CX-5

Time to start the CX-5 and get moving. Under the hood awakens a block of 2.0 Skyactiv-G petrol with four cylinders offering 165 hp and 213 NM, associated with a 6-speed manual gearbox and front-wheel drive. It is, therefore, a somewhat “exotic” mechanical configuration taking into account the practically nonexistence of naturally aspirated engines at this point. Accelerates from 0 to 100 km / h in 10.3 seconds and reaches 201 km / h. 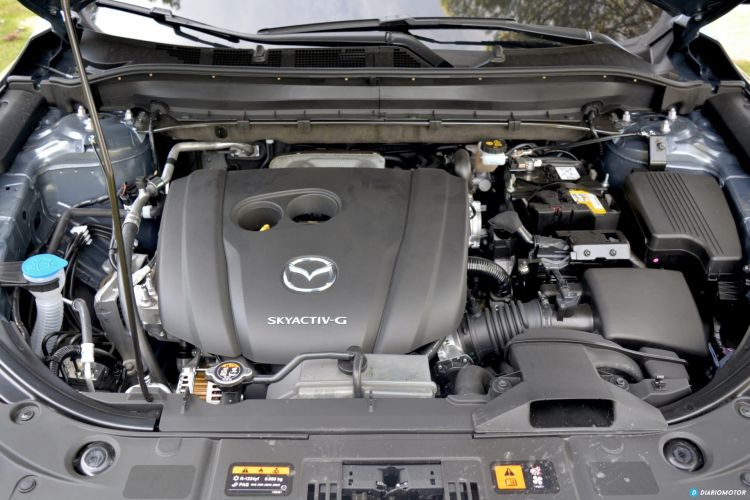 This engine is already well known within Mazda, although recently it has received minor modifications to be more pleasant to use and more economical to operate. Among the most noticeable changes, the introduction of a cylinder cut-off system that enables two of the four cylinders to be deactivated under conditions of low power demand to be more economical in long runs while flattening.

Speaking of consumption, The Mazda CX-5 with this mechanical configuration approves an average consumption of 6.8 liters / 100 km, although the reality is that I have not managed to lose 8 liters During the week that has been in my hands in a use, yes, mixed, with all kinds of routes and a mostly carefree use, without paying too much attention to consumption.

We must have an average consumption of at least 8 liters per 100 kilometers if we do not want to be surprised.

The Mazda CX-5 is, in general, a pleasant car to drive and use: offers agility and comfort in equal measure, with a low noise level and a very high ride quality. Suspension is surprisingly good at absorbing bumps and keeping the body levelwhile the address, despite not being overly informative, is adequate for everyday use. 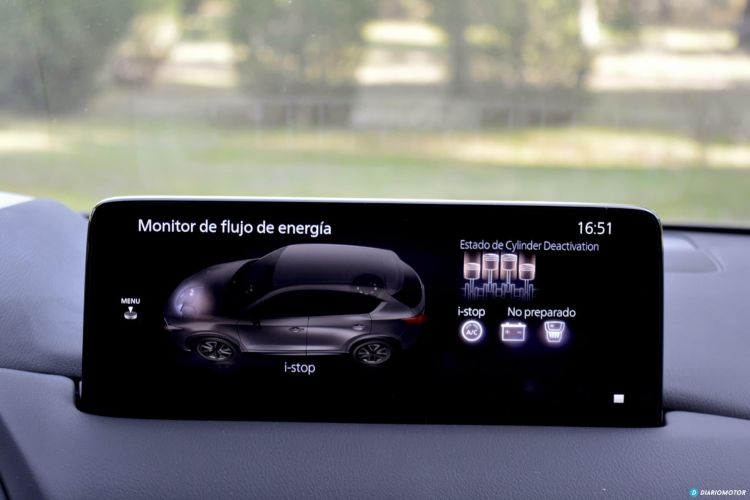 Where the CX-5 punctures a bit is in the performance of its engine: although its operation is smooth, your answer makes me miss the supercharging that feels so good in this type of bodywork, heavier than normal. This fact is especially evident when it comes to recovering speed in long gears, where the CX-5 with this engine is slow since, to make matters worse, the development of its gearbox is relatively long so that at 120 km / h the engine turns at a quiet 2,500 laps.

In summary, This Mazda CX-5 leaves me some contradictory sensations from the dynamic point of view, since elements such as the gearbox, the suspension or the rolling quality scratch at a high level but the engine shows a character that is too quiet and decaffeinated since at no time does it feel “overdone” not to miss a small turbo that drives us more intensely. 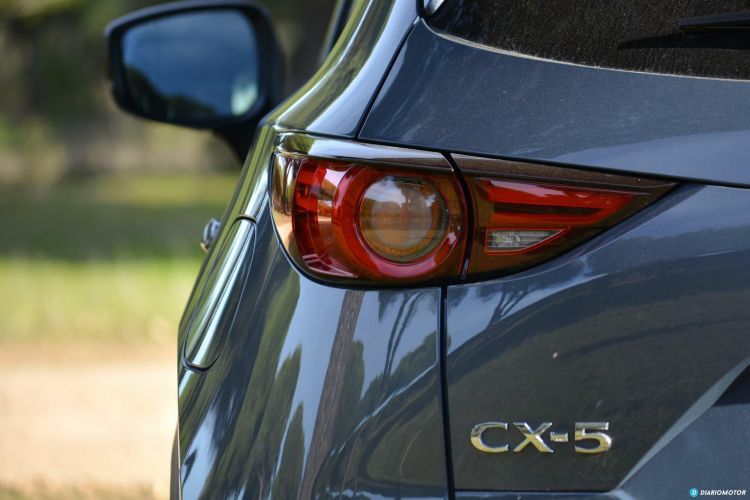 The Mazda CX-5 has a very complete equipment

The unit that I have had in hand corresponds to the equipment “Homura”, a very complete finishing line that includes as standard elements such as the 19-inch black wheels, the mixed upholstery in imitation leather and Alcantara with red stitching, the Bose sound system, the Head-Up Display information projection system on the windshield or the LED matrix headlights that, by the way, offer a very remarkable level of illumination.

The fare price of this version starts at € 34,400, although it is possible to access a Mazda CX-5 from € 29,700, corresponding to the Origin finish with this same mechanical configuration. The CX-5 is also available with a 2.5 Skyactiv-G petrol engine with 194 hp, as well as two 2.2 Skyactiv-D diesel engines with 150 and 184 hp.. You can also opt for a 6-speed manual gearbox or a 6-speed torque converter automatic gearbox.