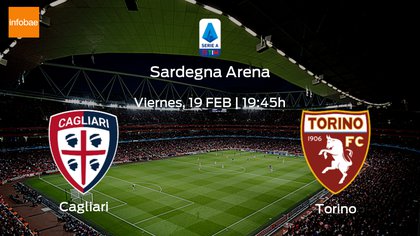 Cagliari receives this Friday at 19:45 the visit of Torino at Sardegna Arena during their twenty-third match in Serie A.

Cagliari arrives at the twenty-third day with the illusion of recovering points after having lost his last match against Atalanta by a score of 1-0. Since the start of the competition, the hosts have won in three of the 22 games played to date in Serie A, with a streak of 24 goals in favor and 40 against.

For its part, Torino reaped a zero tie against Genoa, adding a point in the last match played of the competition, so he will try to continue adding points to his classification table against Cagliari. Of the 22 games he has played this season in Serie A, Torino He has won two of them and adds a figure of 41 goals conceded against 32 in favor.

In terms of local performance, Cagliari they have achieved statistics of two wins, six losses and three draws in 11 games played at home, in such a way that they are a weak team at home, where the visitors have more chances than expected. At home, Torino He has a record of two wins, five losses and four draws in the 11 games he has played so far, which means that he will have to put a lot of effort into his visit to the stadium Cagliari if you want to improve these figures.

The two rivals had already met before in the stadium of Cagliari and the balance is seven victories, four defeats and six draws for the local team. Likewise, the locals have a total of two games in a row without losing against this rival in Serie A. The last match they played Cagliari Y Torino in the competition was in October 2020 and ended with a result of 2-3 in favor of Cagliari.

Analyzing the situation of these teams in the Serie A qualifying table, we can see that both teams are separated by two points in favor of Torino. The team of Eusebio Di Francesco He arrives at the game in eighteenth position and with 15 points before the game. As for the visiting team, Torino, is seventeenth in the standings with 17 points.