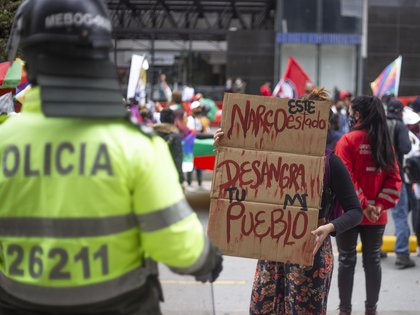 If the arrival of vaccines against covid-19 in the country has given hope to Colombians, the upsurge in violence – despite the signing of the Peace Accords in 2016 – in the regions, which for decades have suffered from the armed conflict , has been stolen from its settlers.

In the first 53 days of this 2021, the Institute of Studies for Development and Peace (Indepaz) has documented 14 massacres in the national territory, which have left 56 fatalities. In other words, in Colombia 1.05 people die every day in a massacre.

In the most recent massacres, in the municipality of Tumaco (Nariño), between February 20 and 21 —because it was thought that it was only one, but according to the Ministry of Defense there were four different events, which would raise Indepaz’s figures— were recorded eleven dead.

In context: Defense Minister confirms that the balance of the massacre in Tumaco is eleven dead

What worries about the massacres is that not only have they been increasing in 2021, but since 2017 they have been increasing, and, despite the security councils headed by the Ministry of Defense and the high command of the Public Force, they have not stopped. 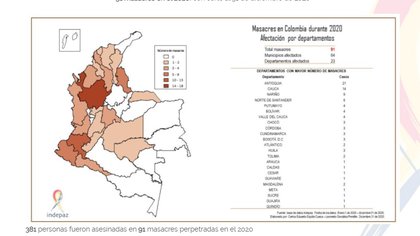 In 2017, 522 Colombians died in 140 massacres documented by OCHA. But the figure increases if you start from the Indepaz records: in 2020 alone there were 381 murdered in 91 massacres.

The departments most affected

In the first two months of this year, the departments most affected by the massacres have been Antioquia, with four of the 14 massacres perpetrated, followed by Cauca (3), Nariño (3) Valle del Cauca (2), Caquetá (1) and La Guajira (1). 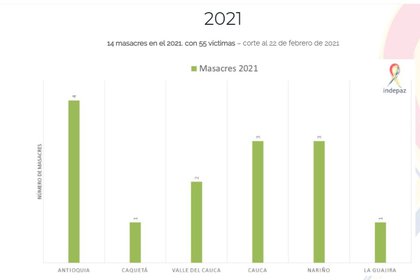 The particularity is that Antioquia (21), Cauca (14) and Nariño (9) were also the departments in which there were more massacres last year, according to Indepaz. And the three have something in common: in none of them has the State managed to fill the void left by the Revolutionary Armed Forces of Colombia (Farc) after the signing of the Peace Accords.

“Since the last year of Santos, when the Peace Accords were signed, the situation was not taken advantage of to create institutions in forgotten regions. The Duque Government has not done so either. Y the void left by the Farc was occupied by criminal structures dedicated to drug trafficking, extortion and illegal mining “, explained Luis Fernando Trejos, doctor in American Studies and researcher on the conflict and post-conflict in Colombia.

The struggle for legitimacy in those territories, as Diego Restrepo, coordinator of the conflict, peace and post-conflict line of the Peace and Reconciliation Foundation told . Colombia in September 2020 – the month in which more massacres were registered (16) -, is what has led to attacks against the civilian population. And the problem is exacerbated in populations with consolidated organization and participation processes. 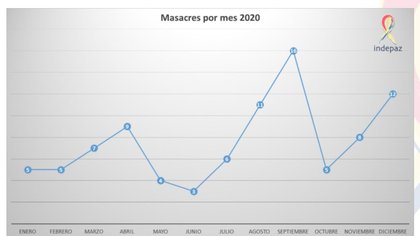 “In regions with strong Afro, indigenous and peasant organization processes, such as northern Cauca, for example, violence is intensifying: illegal armed structures seek to break from within the exercise of community participation and organization to gain control, ”said Restrepo.

What is the solution?

Experts such as Trejos and Restrepo agree that the Armed Forces should be deployed to combat armed structures such as the ELN, ‘Clan del Golfo’ or ‘Los Caparros’, but they also consider that institutions have to be built from and with the communities, since Ultimately, it is they who understand the particularities of their territories.

Juan Carlos Garzón, director of conflict dynamics at the Ideas for Peace Foundation (FIP), explained: “Now we have more fragmented structures, with multiple organizations, local influence and, in some cases, regional. They are actors whose ideology has lost strength, with certain exceptions ”.

“Only in Tumaco,” Trejos says, “is there talk of the dispute between 12 bands.” Hence, the dynamics of the massacres vary at the local level, which is why alternatives and solutions are also understood from the micro, from the specific to the general; listening to the communities.

Regarding the massacres in Tumaco, rewards are offered

According to the Ministry of Defense, what happened over the weekend in Tumaco corresponds to four different homicides “which are allegedly related to the attempted territorial control of Organized Armed Groups ‘Contadores’ and ‘Oliver Sinisterra'”. Hence, the announcement of rewards with whoever gives information that makes it possible to find the leaders of these groups.

– Alias ​​El Gringo leader Oliver Sinisterra and alias Mario 40 leader of the Contadores up to $ 200 million.

Prosecutor’s Office inspected the office of the High Commissioner for Peace, investigates alleged illegality of alias Gabino’s trips to CubaPolice murderer, who escaped from Medellín disguised as a woman, was captured in Cartagena