With the arrival of good weather, there will be more outdoor encounters: are we sure having beers on the terrace of a bar?

There is no zero risk: in the most realistic simulation of all, the risk of contagion is 10%

The good weather is coming the sun and the heat. If we add to that the decrease in the incidence of covid, the end of the state of alarm and the increase in the rate of vaccination, the temptation of relax it will be great. It is likely that we will begin to see the terraces of the crowded bars. We can get together, at last, and we know that the safest way to do this is outdoors. But this, in Spain, also means having a beer or wine on the terrace of a bar. It involves drinking, eating, talking, laughing… What is the risk of doing it?

The Covid contagion outdoors is much less likely than indoors, but it does exist. There is no zero risk. The mask and distance, fundamental protection elements indoors, are still very important outdoors. At NIUS we wanted to verify the risk of contagion to which we expose ourselves when we sit down to drink beers on the terrace of a bar, depending on whether or not we comply with these two protection measures. We used the simulator from the Harvard School of Public Health for this.

The setting: six friends of reeds on a terrace

The setting, therefore, is the terrace of a bar any. Choose your favorite and sit on a table with friends.

They are six people, one of them infected (has covid but does not know) three hours together: chatting, drinking, eating … They all carry mask, a surgical. We estimate that it offers a protection level of 40% because it does not fit well (which is the usual)

We have calculated how the risk of contagion varies in three situations, as we are modifying two parameters: the use (or not) of face mask, and whether or not the distance security between diners (1.5-2 meters).

Simulation 1: with mask and with distance

Risk of contagion on the terrace of a bar, with a mask and at a distance.

In this first simulation, we assume that the protective measures are maintained all the time. The six friends wear the mask always on, while not eating or drinking. And they keep a distance of at least a meter and a half among them. We see that the risk of contagion, in these circumstances, would be very low: less than 1%.

“There is twenty times more risk of contagion indoors than outdoors,” he warns Javier Ballester, Professor of Fluid Mechanics at the University of Zaragoza and member of the “AIREAMOS” platform. We have counted on your advice, to perform the calculations with the highest scientific rigor possible. Keep in mind that the simulator is designed for indoors, so we have been adapting the rest of the parameters to what would be closest to an exterior. But the results are not exact, they are always approximations.

Simulation 2: no mask and no distance 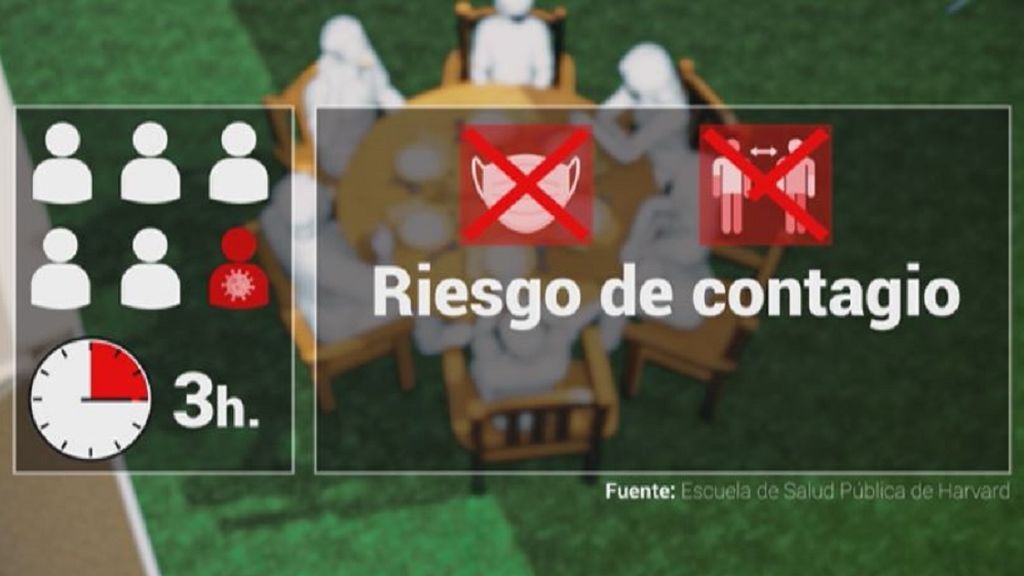 Risk of contagion on the terrace of a bar, without a mask and without distance.

If we pretend that none of the diners comply with the protection measures (they remove the mask all the time and do not respect the distance), we see that things change, a lot. Because the risk of contagion rises to 25%.

Simulation 3: with mask and without distance 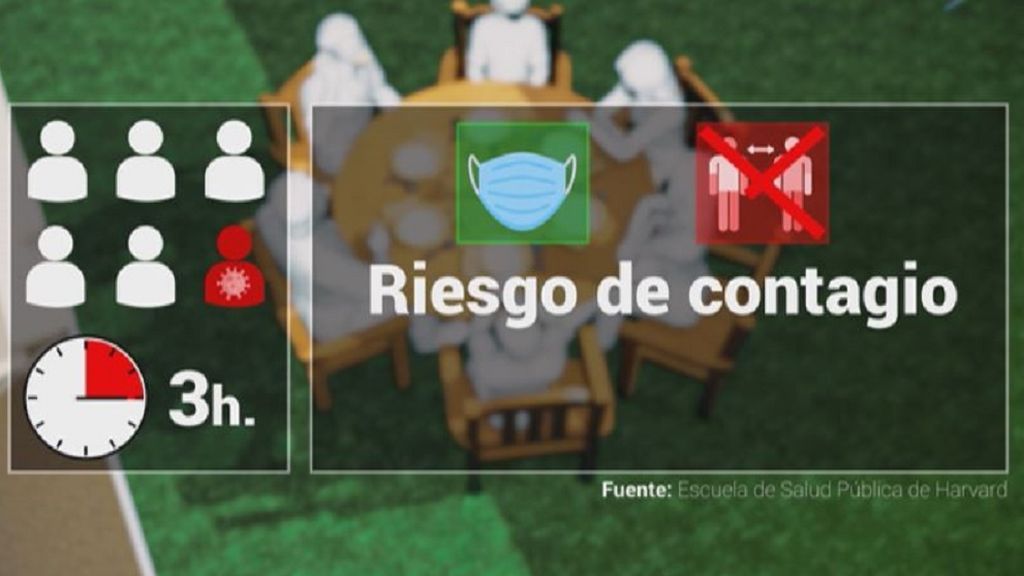 Risk of contagion on the terrace of a bar, with a mask and without distance.

We now assume that there is no distance between the diners, who spend the three hours very close. We only change that parameter, that of distance, but they do wear a mask on while not eating or drinking. She is serious the closest simulation to reality. And here, the risk of contagion It is much lower than the previous case, but if we compare it with the first simulation, we see that it is much higher: rises to 10%.

What would happen without a mask but with distance?

There would be a fourth stage possible, and perhaps the most interesting from a theoretical point of view, to understand the importance of protection measures. We refer to Do not use a mask because the distance is maintained all the time (at least 1.8 meters between diners). Stage it is unreal, in practice. Because no one sits six feet from another person on the terrace of a bar. But we have done the math. Y the result is very revealing.

Yes the six friends spend the three hours without a mask, but maintain that safety distance between them all the time, we calculate the risk of contagion and it turns out that it is less than 1%. That is, similar to the one they had when they used both protection measures. Why is this happening?

“Because when we are outdoors, if we are far away, it doesn’t matter what happens. Even if I’m not wearing a mask, the circulating air renews the air that I am breathing. Outside, if there is enough distance, you don’t need a mask ”. This is how sharp and clear Ballester is. But, at the same time, he insists. “The convention is that the minimum distance is two meters. I would propose more: do not wear a mask always there are at least three meters, even if it is outside. When we go beyond that distance, the exterior no longer protects us ”.

On the terrace of a bar, these two, or even three meters are not realistic, so you cannot sit without a mask. Ballester explains this using the metaphor of smoker’s smoke, which is how contagion by aerosols is best understood. “We are sitting around a table, and even outside, that smoke reaches the one in front. If it is one meter away, it will reach two, almost certainly not, and three will not get anything. If we are sitting around a table, we need a mask, or at least minimize the time without a mask. Because that minimum distance is not met ”.

Ballester also points out, Another factor that is not being taken into account when organizing the bar terraces. “Distance is important, both in my group and between the people at the different tables. The distance is being measured between tables, and that is wrong, it should be measured between people ”.

After running these simulations and calculating the contagion risks, Ballester concludes with a couple of important recommendations. “A basic recommendation is not to sit across from each other. When you are eating, drinking and talking without a mask, what would happen to smoke if you were smoking happens. I would prefer to be next to the smoker, not in front ”.

Just as important is “Minimize the time without a mask: remove it only to eat and drink.” Returning to our simulations, we ask ourselves: in three hours, how much time do we spend on that? “Probably 10%, no more”, calculates Ballester. We have already seen, in the simulations, that if we wear it the rest of the time we will be greatly reducing the risk of contagion.

The “two out of three” rule

For now Ballester confesses that, “with the numbers we have right now, I would keep the obligation to carry it, except outdoors where distance is respected ”. But reality goes the other way and countries like the US are already considering eliminating its obligation even indoors, if one is vaccinated.

Therefore, it is important that know and memorize a very basic rule that will help you avoid contagion, especially if the vaccine has not yet arrived. It consists in always complying with, at least two of these three conditions:

Marr herself explains, in the New York Times: “This is how I have been living for the last year. It all comes down to my rule of two out of three.” And Ballester seconded it: “The contagion risk calculations that we have made are perfectly reflected in that two out of three rule.”