Just a few minutes ago, the Mars Perseverance probe has landed in Jezero crater, thus ending a journey that began on July 30 of last year, and which has taken the probe to travel more than 200 million kilometers. As always happens in this type of mission, the numbers are of an order of magnitude that is difficult to assume, especially if we compare them with those of our day to day life. To put it in perspective, the diameter of the Earth is around 40,000 kilometers.

As we told you a few months ago, when NASA published a video describing what this operation would be like, Mars Perseverance has faced a terribly complex and critical operation. And it is that in a few minutes his speed had to drop below 19,300 kilometers per hour (5.36 kilometers per second) up to landing speed of three kilometers per hour (less than one meter per second). All this, of course, while crossing the Martian atmosphere and, in addition, conducting a complete analysis of the surface to choose a suitable location for landing.

The most critical part has lasted seven minutes, during part of which the Mars Perseverance has lost contact, as planned, while it was crossing the Martian atmosphere. During this phase, the probe has had to withstand a pressure of 10 Earth’s atmospheres. A resistance that has been key so that the spacecraft could decelerate enough so that, once it had crossed the atmosphere, parachutes and engines were enough to guarantee that it settled smoothly on the surface of the red planet.

In this regard, there is a very important aspect that we must not forget, and it is the time that elapses between when a signal is sent from the probe and is received on Earth (and vice versa, of course), with the current distance between Earth and Mars, seven to eight minutes pass. And what do I mean by this? That if Mars Perseverance had to “consult” Earth on how to proceed in the event of a certain incident, the time between sending and replying would be around a quarter of an hour, too long for practically any inconvenience at this critical phase. Thus, Mars Perseverance had the necessary systems to be able to face these eventualities autonomously.

For the final phase of the landing, Mars Perseverance has used Sky Crane, a part of the vehicle, equipped with 16 engines that have controlled the final phase, and that has been in charge of depositing the rover gently on the surface of the Jezero crater, which from now on will be the new home of both Perseverance and Ingenuity, the first human-made flying device to be used on another planet.

After the explosion of joy that has happened to the minutes of tension while waiting for the landing, the interest of those who have followed the event live has, of course, been directed to wait for the first images that Mars Perseverance will send to earth. And just a few minutes after landing, in the transmission made by NASA through YouTube, we were able to see the first images captured by two of the rover’s cameras.

However, several factors must be taken into account before evaluating the first image. The first thing is that it is whenever a vehicle like Mars Perseverance lands on the surface of a planet, this operation removes a certain amount of regolith that ends up in suspension and dirties the protective glasses of the cameras. Thus, it will take a few hours, or maybe even a few days, for these to be cleaned and the image quality is adequate.

On the other hand, the size of the first image shared by NASA is undoubtedly quite small. I clarify this because in the next hours and days we will undoubtedly receive larger images, in addition to waiting for the video of the arrival of Mars Perseverance to Mars. As with the Insight, also from NASA, some people were disappointed with the first images, but the ones that came later were much better. 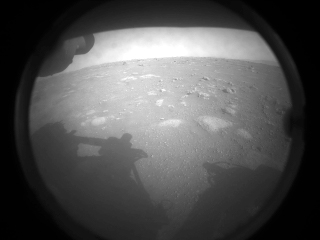 Thus, a critical phase of the mission has already concluded, but now is when Mars Perseverance, in conjunction with Ingenuity, will begin the most important part of the mission: exploring the Martian surface in search of microscopic life remnants that may have remained. fossilized. A plan that begins with the taking and analysis of samples, but which is the first step of something much more ambitious, since the goal is that some of those samples may one day reach our planet.