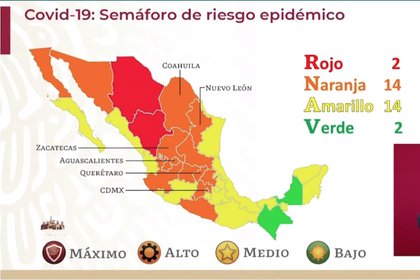 During the daily report on the behavior of the COVID-19 pandemic, Health authorities presented the Biweekly Epidemic Risk Traffic light that comes into effect from next Monday, November 23 and it will be valid until December 7. During that time, two states will be in red; 14 in orange, 14 in yellow and two in green: Campeche and Chiapas.

Mexico City, Zacatecas, Aguascalientes, Querétaro, Coahuila and Nuevo León are at an orange traffic light with maximum alertIn other words, they can saturate hospitals at any time and change to red, so it is important to maintain sanitary measures to reduce the speed of infections.

“The epidemic is still active, it has an upward trend, this phenomenon is concentrated in eight states, the rest have a decline phase, four states have a plateau phaseToday a green traffic light was added, which was Chiapas, but two red traffic lights persist: Chihuahua and Durango, and there are six states that are in a very intense orange, which are close to turning red and it is very important that they take the corresponding measures to reduce the risk”Hugo López-Gatell, Undersecretary of Prevention and Health Promotion, detailed this afternoon. 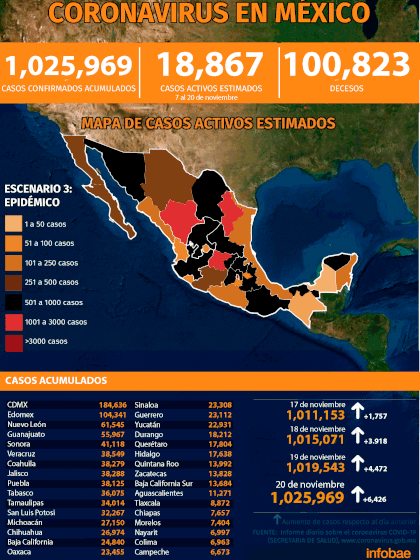 The Ministry of Health (SSa) reported that Campeche and Chiapas will be in green.

Dr. Ricardo Cortés, Director of Health Promotion, explained that the entities will be as follows:

Map of the next epidemiological alert traffic light (Photo: SSa) 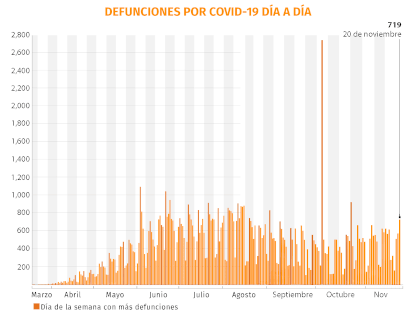 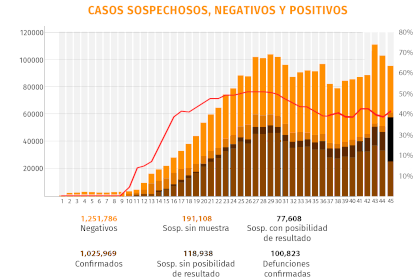 It should be remembered that color Red At the COVID-19 traffic light, it indicates the highest risk of contagion, where only essential economic activities are allowed and it is called to stay at home.

For color orange Essential economic activities are allowed, as well as non-essential companies, although the latter with 30% of their personnel operating in person with strict sanitary measures.

In color yellowOn the other hand, all work activities are allowed, as long as people in risk groups are taken care of, public spaces are restored outdoors and there is limited capacity indoors.

Finally, in the color green All activities are allowed, including those related to school, face-to-face classes and the educational environment in general at all levels.

The top 10 entities that accumulate the highest number of cases are: Mexico City, State of Mexico, Nuevo León, Guanajuato, Sonora, Veracruz, Jalisco, Coahuila, Puebla and Tabasco, which together make up about two thirds (62%) of all accumulated cases registered in the country. 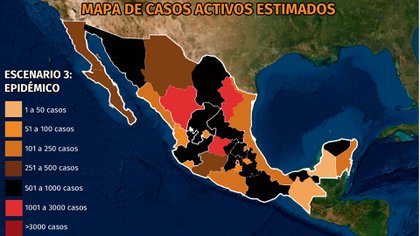 Among the states that are in orange but with alert is Mexico City. In this context, the head of local government, Claudia Sheinbaum has taken some measures to try to control contagions, such as Prohibition.

From the National Palace, they reported that this Friday twenty of November, They have registered 1,025,969 cases of accumulated infections of coronavirus. Furthermore, since the beginning of the epidemic, Mexico has suffered 100,823 deaths. 770,728 recovered people are reported.

The above represents that there was an increase of 6,426 infected in the last 24 hours, as well as 719 deaths.

Mexico City is the entity with the highest number of active cases (> 3,000 cases), followed by Guanajuato, Nuevo León, Jalisco and Durango, as the entities with more than 1,000 active cases and which together account for 47% of the active cases in the country.

Coronavirus in Mexico: 6,426 new infections and 719 deaths were registered

“Fool, you will never accept being wrong”: Vicente Fox’s reproach to López Obrador for the 100,000 deaths from COVID-19