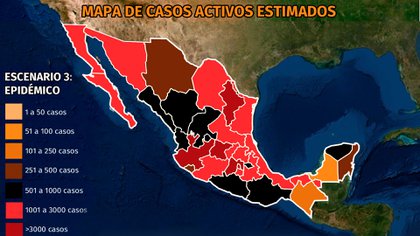 The Mexican Ministry of Health reported that confirmed deaths because of coronavirus (COVID-19) add up 147,614 and what’s up 1,732,290 confirmed cases accumulated. This means that 1,440 people died in one day and 21,007 became infected.

as a whole they account for 92% of the active cases in the country.

This January 22, José Luis Alomía Zegarra, Director General of Epidemiology reported from the National Palace that

This Friday, they indicated that there is a 61% saturation of general beds. There is nine states with more than 70% occupancy. The entities are:

In addition, he points out that there are eight states that have between 69% and 50% hospital occupancy. On the other hand, there are 15 states with less than 50% occupation. Nationwide there are 34,822 beds, of which 13,714 are available and 21,108 are occupied, in other words, there is a 61% occupancy nationwide.

On the other hand, he pointed out that three states with more than 70% fan bed occupancy, used for severe COVID-19 patients are:

Daily progress of vaccination against COVID-19

Likewise, the official reported that until the This January 22, the application of 594,725 doses has been reported of which 574,642 are first doses and 20,083 second doses. It is estimated that until that day 27,346 vaccines were administered to medical personnel.

Likewise, a 42% general advance in vaccination is estimated, with the following five states being the entities with the most vaccines applied (95% progress).

Alomía Zegarra remembered that this day it’s one year since the first press conference that was held in Mexico to inform the population about COVID-19. He said that at that time there were 283 cases in China, and today there are more than 2 million deaths from the disease.

On January 29, the Covax collaboration mechanism of the who will issue its vaccine distribution plan for the world, and Mexico is up to date with the requirements for the first and second rounds of supply of available vaccines.

Mexico City will remain on a red light the following week