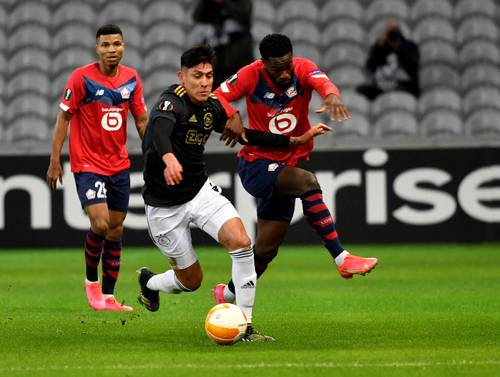 ▲ The Mexican Edson Álvarez played with Ajax the entire match in the 2-1 victory against Lille and caresses the pass to the next phase.

London. Manchester United, Tottenham and Roma, three of the great contenders to succeed Sevilla as European League champions, took a big step into the round of 16, as did Villarreal and Granada. With the Mexican Edson Álvarez as the starter, Ajax managed to save a victory against Lille.

United, second in the Premier League, left their tie almost sentenced after beating Real Sociedad 4-0 in a match that was not played in San Sebastián, but in Turin due to restrictions on entry into Spanish territory from the United Kingdom by the pandemic.

Portugal’s Bruno Fernandes stole spotlights in the match with two goals (27 and 57), while Marcus Rashford (65) and Daniel James (90) completed the score.

Tottenham put up a foot and a half in the next round by beating the modest Austrian Wolfsberger 4-1, with goals from South Korea’s Son Heung-min (13), Welshman Gareth Bale (28) and Brazilians Lucas Moura (34) and Vinicius Morais (88).

Roma also headed to the last 16 with a 2-0 win in Braga, with goals from Bosnian Edin Dzeko (5) and Spaniard Borja Mayoral (86).

After the defeats of Barcelona (4-1 against PSG) and Sevilla (3-2 against Dortmund) in the Champions League and the win conceded by Real Sociedad, Villarreal and Granada saved the honor of Spanish football with two triumphs of prestige.

Granada, debutants in European competitions, played a very serious game to win 2-0, with goals from Yangel Herrera and Brazilian Kenedy, against a Naples used to playing in the Champions League.

The Italians did not have the Mexican Hirving Lozano, who was injured at the weekend against Juve.

Ajax won 2-1 in Lille with a goal from Brian Brobbey with six minutes remaining. Tricolor Edson Álvarez played the entire match, although he received a yellow card at minute 12.

PSV Eindhoven fell 4-2 to Olympiacos, in a match where Mexican Erick Gutiérrez entered the exchange at minute 85 to defend the Dutch team’s shirt, although it was difficult to avoid the disaster.

Meanwhile, Leicester could not go beyond a goalless draw with Slavia Prague, while Arsenal also drew 1-1 with Benfica. Milan, meanwhile, let the victory slip away against Red Star, as they went ahead on the scoreboard, but the Belgrade team got a 2-2 draw.