The Intendance of Maldonado, Uruguay, announced that it will toughen the measures against those who fail to comply with the quarantine, facing the summer season after some cases were registered in coronavirus in that country. In that sense, the mayor Jesus Bentancur put municipal teams into operation – in conjunction with the police and the Ministry of Public Health– For a sworn statement by those who enter -provided by Migrations- they are visited to find out if they are complying with the measures established by the health authorities.

If it is verified that the interviewed tourist or visitor is not complying with the current regulations, the prosecution will immediately intervene and “the weight of the law will have to be noted, with the consequences that it determines,” according to the municipal communication.

“Cases have been detected in which they arrive, leave their bags and leave”, They lamented . sources of the Municipality of Maldonado. In these situations, those involved are intimidated and, if they persist, the case is referred to the prosecutors.

The concern of the authorities lies in their doubts regarding some tests to determine if a visitor or tourist is positive for COVID-19, since there have been cases in which travelers arrive with negative PCR results and after 48 hours they are positive. In that sense, from the Intendancy they commented that it could be failure in the tests, but They did not rule out that there are travelers who present false results.

At the same time, Bentancur He said that the time to reinforce surveillance is now, to prevent the situation from becoming complicated, as this will have health consequences and the consequences of businesses that must close. “If this continues to advance, over and above the health problem, we are going to have a huge problem which is the closing of shops. If it goes off, the work of our people is at stake, “he warned.

The Maldonado mayor’s office has taken 60 resolutions since March 13 to prevent the spread of COVID-19. The last one is the intimation to the mandatory use of the mask, something that had been left a little aside. 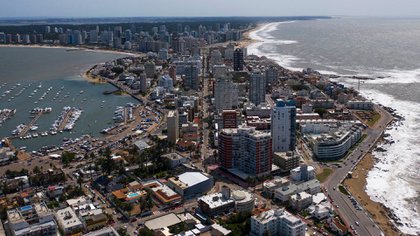 “We have to take measures, citizens have lowered their arms a bit,” said the mayor

The situation in Uruguay

Uruguay added this Sunday 73 new positives of the SARS-CoV-2 coronavirus and reached 4,030 accumulated cases, according to the National Emergency System (Sinae) in her daily report. During that day, 3,829 analyzes were carried out and 370,388 were reached since the first positives were detected on March 13.

Now in Uruguay there are 732 active cases of coronavirus and the department (province) most affected remains Montevideo with 423 positives, while in second place is cannelloni (south) with 87. In addition, in Cerro Largo (east), where a major outbreak was registered days ago, there are 73 active cases and in Rivera (northeast) there are 33. These two departments, both with a land border with BrazilThey have been among the most affected throughout the pandemic and the ones that have most concerned health authorities.

In fact, this Sunday a plane from the Air Force Uruguayan led Cerro Largo a mobile laboratory to process the coronavirus tests that are carried out there, according to the Minister of Public Health, Daniel Salinas. On the other hand, the report indicates that “three new outbreaks were found that are related to two social events“, Two of them in Montevideo and another in Paysandú (west). However, it clarifies that “in all cases the contacts have already been identified and a strict follow-up is maintained”.

Finally, the report highlights that there are ten people in intensive treatment and adds that, upon registering a new death, in Uruguay now there are 65 people who died from the aforementioned disease. This Sunday, the cases of coronavirus in the world amounted to 53.5 million, while the deaths remain at 1.3 million, according to the data updated daily by the World Health Organization (WHO).

In Cartagena, today there are 155,000 victims; in Dabeiba, Antioquia, there are eight disappeared, and in Chocó, 15 affected municipalities. In Bogotá ravines also overflowed. The official balances are awaited on the islands of San Andrés, Providencia and Santa Catalina.

In Cartagena, today there are 155,000 victims; in Dabeiba, Antioquia, there are eight disappeared, and in Chocó, 15 affected municipalities. In Bogotá ravines also overflowed. The official balances are awaited on the islands of San Andrés, Providencia and Santa Catalina.