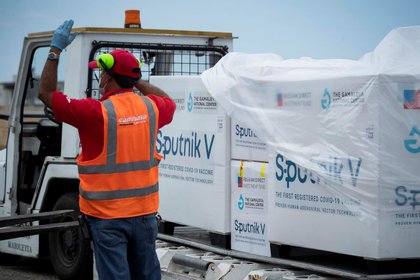 Moscow, Feb 19 . .- The president of Venezuela, Nicolás Maduro, thanked his Russian counterpart, Vladimir Putin, today for supplying the first 100,000 doses of the Russian Sputnik V vaccine, according to the Kremlin.
The two leaders held a telephone conversation on Friday, during which “they devoted great attention to cooperation in the fight against the coronavirus,” the Russian presidency said in a press release.
Venezuela began this Thursday the immunization campaign of health personnel against covid-19 after receiving the first batch of the Russian remedy last Saturday, a small part of the ten million doses agreed with Russia.
The Venezuelan president explained that the “social” personnel who are “protecting” the people in the streets, the security forces and the high authorities of the Government, including the deputies who were elected on December 6, will be immunized later. 92% of the ruling party, in some legislatures that were branded as fraud by the opposition sector headed by Juan Guaidó.
Last Wednesday, Maduro praised Sputnik V, which he described in a press conference broadcast by the Miraflores palace as “the most advanced vaccine” and the “safest in the world”, and affirmed that it would be inoculated together with his wife, Cilia Flores, as soon as “the moment arrives.”
The presidents of Russia and Venezuela also debated “in a constructive and friendly way” the current issues of relations between the two countries, described as “strategic partnership.”
Maduro informed Putin, one of his main allies, about the situation in Venezuela “in the context of external pressure” exerted on the Caribbean nation.
“The president of Russia expressed his support for the Venezuelan authorities in their effort to strengthen the sovereignty of the country,” the Kremlin noted.
Both parties confirmed the “mutual readiness” to expand mutually beneficial relationships in various branches.
Russia is one of the greatest allies of President Maduro, whom he publicly supports in the face of international rejection, which does not recognize the legitimacy of his mandate.
The Maduro government often refers to Russia, which provides it with weapons, technology and other resources, as a “strategic ally” of its multilateral policy.