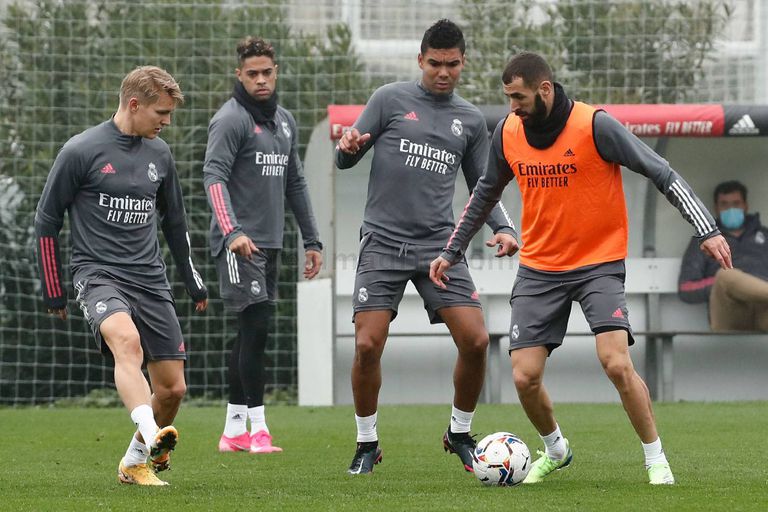 Casemiro, second from the right, this Wednesday in Madrid’s training session with Benzema (right), Odegaard (left) and Mariano.

Real Madrid looks worried at the infirmary. At the gates of some delicate days due to the meetings in Vila-real (Saturday, 4.15pm) and in Milan against Inter (Wednesday 25th), its two undisputed centrals, Sergio Ramos and Varane, returned injured from the national team break. Until this Thursday they will not undergo medical tests because before they must wait for the results of the PCR carried out upon their return to Spain. The concern in the white club increases since, to the problems with these two non-negotiable Zidane, joins the situation of Militão, the third center-back of the squad, who has been isolated at home for two weeks due to coronavirus.

The good news in Valdebebas is the recovery of Casemiro, who returned this Wednesday after having tested positive 10 days ago in the previous trip to Mestalla. The return of the Brazilian midfielder is a relief due to his weight in the team and because Valverde, another pillar of the midfield this season, was injured in Valencia. Hazard, who was also infected in the same tests as Casemiro, continues to be confined to his home. Both the Belgian and the Brazilian defender will continue to do tests until confirming that they have overcome the disease.

The eyes, in any case, are now focused on Ramos and Varane. The Sevillian retired this Tuesday against Germany in the 43rd minute due to discomfort in the hamstring in his right leg. Despite the proximity of the break, the captain of Madrid and Spain did not wait for the interval and was quickly replaced by Eric García. While waiting to know the severity of the injury, his presence at La Cerámica this Saturday seems complicated.

In this abrupt way a very agitated concentration was closed for him, for the good and for the bad. Against Switzerland he became the European player with the most caps (177), ahead of Buffon, and he missed two penalties after 25 consecutive hits. And against Germany he rose to the third rung of the footballers with the most appearances with his national teams (he has Ahmed Mubarak, from Oman, and six to Egyptian Ahmed Hassan) before being injured. And, in the background, there was always the noise about his future at Madrid, with whom he ends his contract next June. This Monday he was scheduled to speak at a press conference with La Roja in the framework of the duel against the Germans, but he preferred to cancel the call and remain silent.

Varane, for his part, was also relieved midway through the game against Sweden with a sore shoulder after a fall. The French coach, Didier Deschamps, explained at a press conference that the decision was due to “small problems”, without giving it much importance. This Thursday we will know exactly how far they go.

While the real state of both is known and Militão is awaited, the good news in the white defense comes from Carvajal and Nacho, both already healthy. The right-back came back a little earlier than expected, in seven weeks, from his left knee internal lateral ligament sprain. Its return contrasts with the dry dock of Odriozola. Both were injured at the same time, Carvajal’s loss forecast was double that of the Basque; however, the former already works with his peers and the latter continues his recovery in the gym.

And this extensive medical part closes with Benzema, with whom Madrid does aspire to have in Villarreal. The striker left Mestalla with an overload and three days after visiting La Cerámica he still alternates group work with a solo part.