Brian Warner, better known as Marilyn manson, is being investigated by the Los Angeles Police Department following recent allegations of abuse and mistreatment made by several women, including actresses Evan Rachel Wood and Rose McGowan, as well as other figures such as Ashley Walters, Sarah McNeilly and Ashley Lindsay Morgan .

The Los Angeles County Sheriff’s Department’s Office of Special Victims is investigating allegations of gender-based violence involving Mr. Brian Warner, also known as Marilyn Manson who works in the music industry. The incidents occurred between 2009 and 2011, when Mr. Warner lived in the city of West Hollywood, “said the police in a statement, according to Deadline.

The accusations began when Evan Rachel Wood, the singer’s former partner, posted on Instagram that it had been “horribly abused ”by the artist for years. Her revelation was joined by other confessions by other women, including actress Esmé Bianco, who said she suffered physical and psychological abuse from Manson. 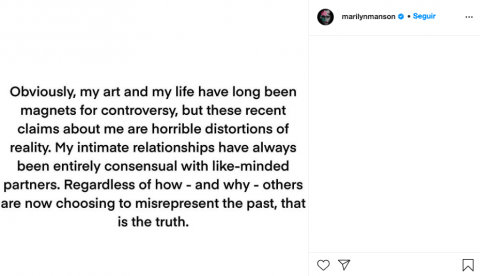 Manson was fired from the CAA agency and his appearances on ‘American Gods’ and ‘Creepshow’ were cut. The singer has denied the accusations, also responding on Instagram.

The recent claims about me are horrible distortions of reality, “he declared, stating that his romantic relationships were” totally consensual with like-minded partners. “