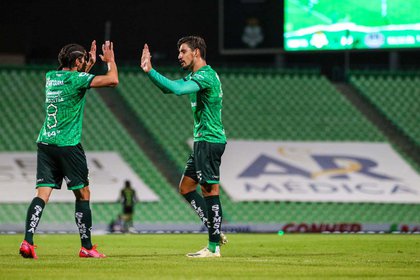 The League MX announced the schedules and dates of the matches of the reclassification phase of the Guard1anes Tournament 2020, which will be played on Saturday November 21 and Sunday November 22th.

The following meetings are scheduled for Saturday: Santos Laguna against Pachuca, at 7:00 p.m., duel that will be hosted by the Corona Stadium and for the 21:10 hours will start the match between Chivas de Guadalajara against Necaxa, at Akron Stadium.

Sunday at 19:00 hours the duel between Tigres and Toluca will be played, in the University Stadium and at 9:10 p.m., at the BBVA Stadium, Monterrey will be measured against Puebla.

It should be noted that this round is played in one game, they are the organizations that finished from fifth to twelfth place in the General Table and the four that occupy a better position compete in a match at home. In the event that the matches conclude in regular time tied, the criterion to apply in that case is the penalty shoot-out. 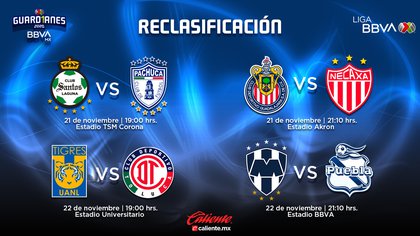 The teams from León, Pumas, América and Cruz Azul will face the winners of the aforementioned duels in the quarterfinals.

Meanwhile, the teams from León, Pumas, América and Cruz Azul will face the winners of the aforementioned duels in the quarterfinals.

Las Chivas is the only team of the so-called greats of football that did not achieve their direct qualification to the quarterfinals, finishing in seventh position, with 26 units, for which they will face Necaxa.

The favorites to keep the title?

According to the projections made by the FiveThirtyEight portal, it is León, with 18% of the probabilities (his last title was obtained in the Clausura 2014), then there is Cruz Azul, with 16% (the last time he was champion was in 1997) and followed by Tigres with 13 percent.

The lowest probability to win the title with less than 5% are: Puebla, Toluca, Necaxa, Pachuca and Guadalajara. In the case of Chivas, his last championship was obtained in the Clausura 2017, but Puebla his second title was obtained in the 1989-1990 season.

Cruz Azul is “to be champion”: Rafael Baca maintains the illusion to end the drought of more than 20 years without a title

“I trust a lot in Julio”: Lillini assured that Alfredo Talavera’s substitute will successfully defend Pumas’ goal in the Liguilla

Liga MX: how far or close is the return of stadium fans