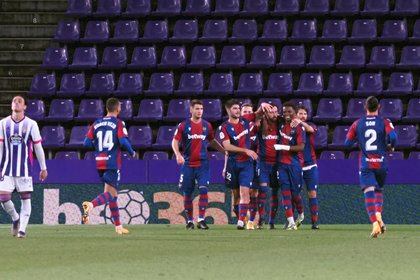 Levante winger José Morales (cd) celebrates with his teammates after scoring 1-4 during the match corresponding to the round of 16 of the Copa del Rey between Real Valladolid and Levante UD, this Tuesday at the José Zorrilla stadium, in Valladolid. . / R. Garcia

Valencia, Jan 27 . .- Levante qualified for the quarterfinals of the Copa del Rey eight years after its last appearance and in which it was then eliminated, in a double game, by Barcelona by a resounding 9- 2.
After winning this Tuesday 2-4 in Zorrilla against Real Valladolid, the Valencian team will be in the draw for the quarterfinals, which will also be played as a single match between February 2 and 4.
Levante last played this tie of the eight best teams in the Cup in January 2014 and after losing at home to Barca 1-4, they lost again at the Camp Nou 5-1.
Of that team led by Joaquín Caparrós, there is no one left in the current squad, although Levante’s technical secretary, David Navarro, was at the club then, but did not play any game in that tie.
In addition, Levante also qualified for the quarterfinals in 2012, 1941 and 1935, in which it was their best participation to reach the semi-finals after defeating Barcelona, ​​although they did so under the name Levante FC.