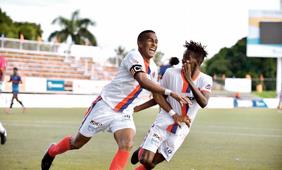 The eleven Delfines del Este and Atlético San Cristóbal achieved triumphs this weekend in the repechage matches to advance to the semifinals of the 2020 Dominican Football League. Colombians Juan Vélez and Alonzo Umaña scored the goals for Delfines that won 2- 1 to Atlético Vega Real in a match held on Sunday at the Félix Sánchez stadium.

Umaña broke the tie in the 86th minute with a free kick. Vélez opened the scoring with a spectacular Chilean in 69 ‘and Maykel Reyes equalized for the vegans in 76’. Delfines qualify for the first time in their history to the semifinal round, where they will face Cibao FC.

Edward Acevedo, technical director of Delfines, will be on the bench for this round for the fourth consecutive tournament and the first three were in front of his rival next week.

Acevedo commanded Cibao FC to the title in 2018 and in 2019 he was a finalist in the Apertura tournament and Clausura champion. On Saturday, Atlético San Crístóbal achieved a resounding 1-3 win over Atlántico FC to advance to the semifinals.

The great hero
Jairo Jean scored a goal and was part of the plays that produced the other two goals to be a hero for the winners. The southerners visited those from Puerto Plata, who played the tournament at home at the Cibao FC stadium in Santiago, and marked their ground from the opening whistle with a determined game and the firm intention of surprising their rivals.

San Cristóbal, third in the South Zone in the group stage, will face O&M FC in a semifinal round trip, the team that dominated the aforementioned group. Puerto Plata was second in the North Zone, but their crown aspirations faded in a frustrating 90 minutes. Jean opened the scoring with an anthology goal.

He received a corner kick from Ergy Berkin to kick the ball into the air and send it into the net at the near post. Luis Miguel Pereira scored the second goal for San Cristóbal in the 62nd minute.

The semifinals of this special season of the Dominican Soccer League will be played in round-trip matches over the next two weekends to determine the finalists.

Adding up.
Welbin Sánchez made a free kick to the goal and after goalkeeper Giancarlos Martínez stopped the ball, being pushed by Jean but defender Felipe Núñez removed the ball and Pereira was attentive to return and score. In a counteroffensive, Jean served a pass to Erlan Díaz and he sentenced in ’73. Jhon García scored a penalty for Atlántico in the 82nd minute.