The Zoom interview has the appropriate framework to talk about the clash of civilizations: a French and an Argentine speak in English through a platform developed by a Chinese-American engineer. The globalized world returned everything so close that there is no longer room to think about the non plus ultra of the European maps prior to 1492.

Laurent binet won world renown for his novel HHhH, in which, with a style reminiscent of Milan kundera, told the story of the Nazi hierarch Reynhard Heydrich. For that book he received the Goncourt Award and a barrage of auspicious reviews that placed it as the future of French literature. Away from the pressure, it took him five years to deliver his next novel: The seventh function of language it’s still better than the previous one. There, also taking a real event – the death of Roland Barthes – he develops in the key of a crime novel a theory about the mysterious relationship between the story and power.

Now comes his new novel, Civilizations. Although it seems like a contradiction, it is in the same line as the previous ones and, at the same time, it completely bankrupt it. Binet experiments with an alternate reality. It starts from a real event such as Columbus’s trip, but he wonders how the meaning of History would have changed if the Indians who received it had done so with arms and without naivety.

“You change a brick in the castle of history,” he says now in dialogue with . Culture, “And changes the entire shape of the castle. It’s like the butterfly effect ”. So in Civilizations, is the Inca Atahualpa who travels to Spain to conquer the empire of Carlos V. 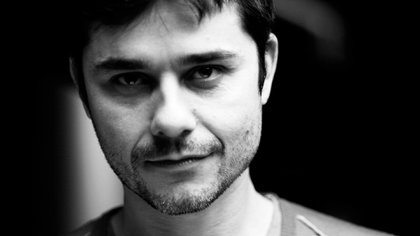 –You usually work with history as narrative material, why this time did you take it towards uchrony?

—History and literature have a lot to say to each other. But I understand that the question is whether there is any contradiction between the object of HHhH and that of Civilizations.

—It’s that if you don’t commit, you end up doing something false, like trying to pass off a fact as historical, when we all know it wasn’t. HHhH he spoke of the facts; that was my goal. Civilizations It is a game and, as long as that is clear in the reading contract, for me it is fine: you are going to read a uchrony. The first question was: “What if the indigenous people invaded Europe.” And the second: “How”. That’s how it started. As the Indians had to defeat the Spanish, they had to be as armed as they: with steel, with gunpowder and with antibodies. It was fun to imagine what could happen, but always looking for the most logical option possible.

–Can you imagine another winner, but can’t imagine crossing without violence?

—You can imagine what you want, but, if you want it to be credible, at one point there has to be some violence. It is an important question because some people – even if they liked the book or not – believed that I wanted to show good and peaceful indigenous people. That is not so because it would not have been credible to me. The Incas and Aztecs were not peaceful at all. They were warriors. They were another class of conquerors. In my mind, Atahualpa is not that different from Carlos V. They were both kings, conquerors and wanted to rule their empires.

–What can be learned from the history of mankind with HHhH Y Civilizations?

“I think the main lesson is that history is a tragedy.” It is full of deaths, massacres, violence and also heroism. Full of murderers and resistant. History is a fight for survival. Always. In a different way, but it’s always that fight. For good causes, for bad causes, but a fight. Life is like that too. With conflicts and alliances. One fights against others alongside others. Friendship is needed. 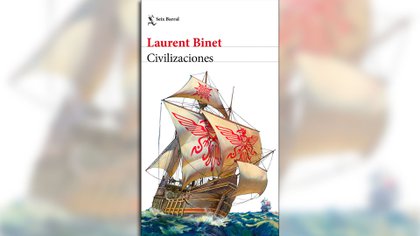 Indians are pissed off

“I am neither concerned nor apologetic. Yes, I am male, white, French. As a novelist I am not concerned and as a citizen I believe that “cultural appropriation” is a mistake. The best example I have is Eric Clapton and BB King: Clapton stole everything from King, but they were great friends because without Clapton, BB King wouldn’t have been as famous as he is. I wrote this book with a lot of love. For me, it’s really not an issue.

–Maybe thirty or forty years ago it wasn’t, but …

“Maybe five or ten!” It is something very current. When I started writing the novel it was not a theme. It took me four years to write it and during that time I could see how it was growing. It doesn’t bother me when people talk and, in fact, it seems like a good sign because they criticize me from both sides. Those on the Spanish right are angry because they think it is another book on colonial black history, but also from the left they wonder how I dared to put myself in the place of the indigenous. Maybe that means I did something interesting.

–Was there an issue that you consciously wanted to avoid?

As in any novel, you have to find a balance. But I have a very simple rule: you cannot hate your characters. Never. To nobody. You may not love them, but you cannot hate them because at a certain point you have to understand them. Another thing that I had in mind regarding balance was to take Cortés and Pizarro as models for Atahualpa. The problem was how to conquer an empire with 200 men. My models were Cortés and Pizarro. I made Atahualpa behave the same way. When he is in Toledo, he perpetrates a great massacre like Cortés did in Cholula. 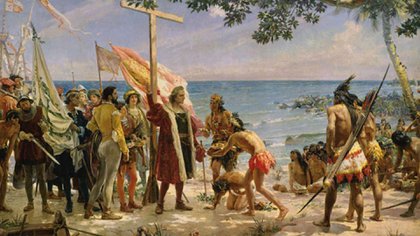 The landing of Columbus in a painting by José Garnelo (Photo: Archive)

–History — even alternative history — is read in the present tense. You can read Civilizations as a metaphor for the migrant crisis?

“It could.” In my novel, Atahualpa and his people are fugitives. At the same time, it is not exactly like that because he is the Sun King. Migrations are at the heart of world history: people migrate.

–Is it an awkward read?

“There are no awkward readings.” The novel is always open to interpretation and I am glad that there are people who see something that I do not. I love Umberto Eco’s statement: if you want to be a good novelist, your novel must be smarter than you. Hopefully my book is smarter. 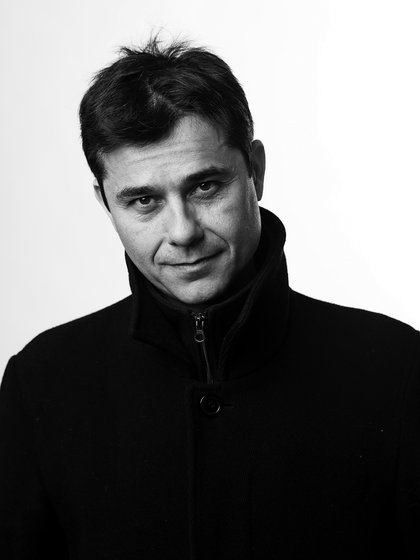 The mystery of power

–When he was in Buenos Aires and participated in Filba, he said that he was writing a book on Mitterrand. Shortly after he published The seventh function of language and, if that book is about Mitterrand, at any rate, it is almost on the last page. The question, then,Civilizations is it a book about Cervantes?

-Yes Yes! Well thought out, yes. Perhaps every novel is about Cervantes. Yes. I like the idea of ​​Cervantes appearing at the end to do a double set of backs. The first reverse is how Europe is viewed by indigenous people. Then I found it interesting to jump some thirty years into the future and see how America was viewed by a European who lived in India ruled Europe. I would love to read Don Quixote In America. I’ve been toying with that idea.

–The person in power must be mysterious? You wrote about Himmler and Heydrich, about Mitterrand, about Atahualpa.

—In real life it is best to be transparent, something that rarely happens. But as narrative material, mystery is better. There is the main difference between Atahualpa and Carlos V: there is very little material on Atahualpa, few testimonies, very few lines written by the Spanish conquerors. Instead there is a lot about Carlos V. Writing to Atahualpa was a challenge.

-Yes. But, strictly speaking, I can say it for each character.

Secret message: they revealed who wrote the enigmatic phrase in Munch’s “The Scream”At 101, Lawrence Ferlinghetti, the last poet of the Beat Generation, died