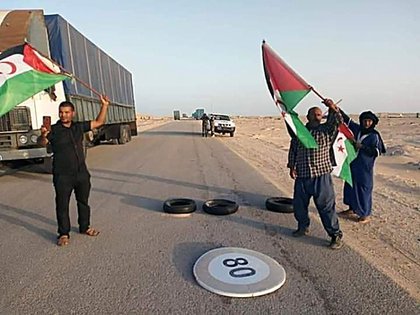 View of groups of Sahrawis demanding a referendum on self-determination. . / Liam Bachir / Archive

Quito, Nov 20 . .- Dozens of Latin American organizations, personalities and activists have expressed their concern over the growing tension in Western Sahara and have called for a self-determination referendum for the Saharawi people in order to achieve peace in northwestern Africa.
Pablo de la Vega, spokesperson for the Ecuadorian Association of Friendship with the Saharawi People, told Efe in Quito on Thursday that more than a hundred and a half personalities and civil society associations have signed a document in which they also demand the withdrawal of Moroccan troops from the Guerguerat area.
Among the personalities, he said, the adhesions of the Argentine Nobel laureate Adolfo Pérez Esquivel stand out, as well as human rights defenders such as the Dominican Annalisa Melandri, the Panamanian Gloria Esther Castillo, the Colombian Lizeth Estrada and the Ecuadorian diplomat Horacio Sevilla.
Likewise, the Chilean filmmaker Marco Enríquez Ominami, the Brazilian Moara Crivelente and the Venezuelan Rafael Ramírez, as well as representatives of social associations from Ecuador, Mexico, Chile, Argentina, Colombia, Brazil, Nicaragua, Panama, Uruguay, Venezuela, Bolivia and the Dominican Republic.
All of them “express their deep concern at the recent events that occurred (…) in the so-called Buffer Strip in Guerguerat”, where “the Moroccan Military Forces carried out a brutal attack on Friday 13 (November) on dozens of protesters Sahrawi civilians who were peacefully protesting the existence of that illegal gap opened in the ‘military wall’, “says a text released by the Sahara Press Service, dated in Quito.
De la Vega commented that the basic argument of the statement of the international solidarity group is that the right to self-determination of the Saharawi people be made viable through a referendum, already approved by the United Nations in 1991.
He also said that the Secretary General of the United Nations, António Guterres, has been asked to delegate a special envoy of his to observe the situation in the area, an action that if applied in time would have avoided “situations as critical as the current one. “.
GROWING TENSION
Tension in the Sahara erupted last Friday when the Moroccan Army intervened to evict a group of Sahrawi protesters who had been blocking the Guerguerat crossing for three weeks, a 5-kilometer strip between the Moroccan customs and the Mauritanian border, where they paralyzed traffic commercial.
The Sahrawi Arab Democratic Republic (SADR), recognized by Ecuador and another twenty Latin American and Caribbean countries, many of which later canceled or frozen their relations, responded to this military action by breaking the ceasefire agreement, signed in November 1991 and declared war on Morocco.
This country minimizes these combats for now, calling them harassment without any scope or “material or human damage.”
The Polisario Front and the SADR sent this Thursday “an urgent message” to the countries and public and private entities in which they ask them to stop carrying out any type of activity in the Saharawi territory since it, from their perspective, is ” currently in a situation of open warfare. “
COMPLEX SITUATION
De la Vega appreciated that the international solidarity movement sees a ceasefire “very difficult,” since the Polisario Front will not accept the same arguments that were used by Morocco in 1991 to end the conflict.
The Polisario Front, surely, “is going to raise many more conditions to sit at a negotiating table,” added the spokesman.
Therefore, the regional statement seeks to urge the General Assembly, the Security Council, the United Nations Special Committee for Decolonization, France and Spain and African Unity to put an end to this conflict with the solutions already approved. , but to which Morocco has refused, he added.
“The right to self-determination is the umbrella of all rights,” which is why it is called for a human rights mandate, because at this moment there is a strong repression in Sahrawi cities under Moroccan military occupation, “added De la Vega.