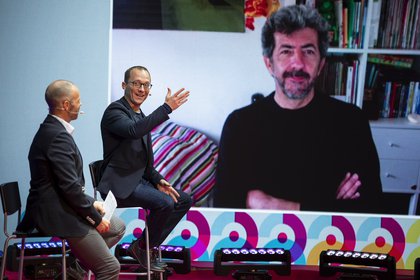 Tonight, the director Alberto Rodríguez will receive recognition from the Huelva Ibero-American Film Festival, which will present him with the ‘Ciudad de Huelva’ Award during a virtual event that will begin at 8:00 p.m. An award that, he pointed out, makes him feel like “an apprentice who approaches his teachers”, since he has participated in this festival since its inception, as a student, script tutor or exhibiting a film.

The honoree, who has participated this Monday in an online press conference prior to the award ceremony, has assured that he is “very excited” to receive this award and, especially, to do so in the same edition in which the actor Eduard Fernández is recognized. “For me it is an honor to receive this award with a teacher like him,” he confessed.

The director of the Ibero-American Film Festival of Huelva, Manuel H. Martín, has accompanied Rodríguez in his virtual meeting with the media, highlighting that the director perfectly represents the concept of “everything is possible” due to his “versatility” as a creator , has indicated the festival in a press release.

Rodríguez has acknowledged that “many experiences and many films” unite him to the festival, therefore, returning now to collect the Ciudad de Huelva Award makes him feel, “a bit like the apprentice who ends up approaching the teachers.”

The producer of acclaimed films such as ‘The minimal island’ or ‘The thousand-faced man’, has valued the moment Andalusian cinema is currently experiencing, which he has described as “very good, indisputably much better” than when he began his film career. The proof, he said, is that a movie like “The Infinite Trench” is nominated for an Oscar.

“The first seeds of a small industry are beginning to germinate, which I think is the most important thing so that there can be quality production,” he pointed out.

In this sense, Rodríguez has remarked that “producing a lot so that good things come out” is essential. “We have been lucky to get it right many times but it is difficult, you have to produce a lot for good films to come out,” he said.

Regarding Ibero-American cinematography, Rodríguez has valued that although he is in “good health” he has “a big problem” and that is that “they are very disconnected cinematographies.” For this reason, he stressed, the Ibero-American Film Festival has an important function since it “helps” to alleviate this disconnection, offering the possibility of seeing films that would not reach European screens otherwise.

Alberto Rodríguez has also analyzed the outstanding cinematographic value of Huelva, to which, he has confessed, he has a great “affection”. The director explained that he has always been “very aware” that the province of Huelva is “a wonderful setting” to shoot, “from the mountains to the sea.”

Thus, he recalled that there have already been productions that have taken advantage of it “because it has many possibilities, with a beautiful mountain range and incredible coastline.” In any case, he said, “it is a world to discover and it is possible that little has been exploited but every time it has been shot there wonderful things have come out.”

At this time, he valued, the film industry is experiencing a “very delicate” moment due to the pandemic. “The most important thing is not to lose the reference of what we had to recover it when normality returns,” he said. He also wanted to share some advice to young people who are embarking on the film world. “What has worked for me is watching a lot of cinema and trying to shoot a lot, telling stories with images and sound,” he told them.

Regarding the way in which the pandemic is living and the changes that it has been able to produce in his professional routine, Rodríguez explained that he has caught him in the script writing phase, so he has written “a lot” and has also He has been preparing a movie for next year, so although his routine has not changed “much”, he has been affected “like everyone else” because it is “a very complicated moment in which the most important thing is not to lose the reference of what we had to recover it when it is resolved “.

He has also explained that he has shot some advertising with the security protocols, which makes the work “quite complicated, uncomfortable and difficult” with 16-hour days with the masks, although “there is no other”.

Finally, he hopes that 2021 will become “more hopeful”, adding that he is “an optimistic pessimist”, so he hopes that “this disastrous year will change for real, which is enough for a movie, but for a while, when everything has passed and let’s see it from another perspective. “

Alberto Rodríguez (Seville, 1971) has become in recent years one of the most acclaimed film directors in our country, with such outstanding films as ‘The minimal island’, ‘The man with a thousand faces’, ‘Group 7’ or ‘7 virgins’, which add up to a total of 15 Goya Awards in different categories, including Best Director and Best Film.

With a degree in Image and Sound from the Hispalense, Rodríguez began his cinematographic career linked to the also director Santi Amodeo, with whom he co-directed the short film ‘Banks’ (1999), widely awarded, and the feature film ‘El Factor Pilgrim’ (2000), produced with very limited financial resources and who received a Special Mention from the jury of New Directors of the San Sebastián Film Festival that year.

The Sevillian director took his first solo film, ‘El traje’ (2002), to the Berlin Film Festival, to later establish himself as one of the young Spanish directors with the most projection with his film ‘7 Vírgenes’ (2005), whose protagonist, Juan José Ballesta, won the Silver Shell at the San Sebastián Film Festival, a feature film that also added six nominations at the Goya Awards, finally winning Jesús Carroza for Best New Actor.

After the film ‘After’ (2009), Alberto Rodríguez premiered in 2012 ‘Grupo 7’, one of the best Spanish productions of that year, set in Seville at the 1992 Universal Exposition. After being nominated in 16 sections, including for Best Film and Best Director, the film won two Goya Awards: Best New Actor (Joaquín Núñez) and Best Supporting Actor (Julián Villagrán).

Absolute recognition would come to him in 2014 with the acclaimed ‘The minimal island’, an Andalusian noir film work that was the great winner of the Goya Awards that year, obtaining ten awards, including Best Film, Best Director and Best Original screenplay.

His last film to date is ‘The Man with a Thousand Faces’ (2016), a play based on the tortuous story of the Spanish secret agent Fernando Pasea who won two Goya Awards and his leading actor, Eduard Fernández, took the Shell Silver Award at the San Sebastián Film Festival. Alberto Rodríguez has also shown his talent in the television series with ‘La peste’ (2018), which he created and directed for ‘Movistar +’ set in Seville at the end of the 16th century.

In this 46th edition, the Huelva Ibero-American Film Festival not only recognizes the career of Alberto Rodríguez, but also that of the actor Eduard Fernández, who received the Ciudad de Huelva Price during the opening ceremony of the exhibition. Likewise, the Ibero-American wants to highlight in this edition the screening of the actress Macarena García, who will collect the Luz Award next Friday, November 20, during the closing ceremony.