Lanús he thrashed this Wednesday 3-0 to Velez
Sarsfield in the Argentine semifinal of the South American Cup and qualified with an aggregate score of 4-0 to the final, in which he waits for the definition of his rival of the cross between Defense and Justice against Coquimbo Unido.

With goals from Tomás Belmonte, Nicolás Orsini and Alexandro Bernabei, the ‘garnet’ team sealed the passport for the final of the continental competition, which will be played on January 23 at the Mario Alberto Kempes stadium in the Argentine city of Córdoba.

In this way, Lanús will seek his third international conquest after winning the 1996 Conmebol Cup and the 2013 South American Cup, which are added to the four local tournaments of his record (First Division Tournaments 2007 and 2016, Super Cup Argentina 2016 and Copa Bicentennial 2016).

From the beginning of the match, Lanús came out to play with the advantage that he had achieved last Wednesday as a visitor by 0-1 with the goal of the experienced forward José Sand.

It was Vélez who had the first option of the meeting with a shot by Ricardo Centurión from the edge of the area that demanded the appearance of goalkeeper Lautaro Morales, a great figure of ‘Garnet’ throughout the series.

Thiago Almada and Federico Mancuello repeated their shots from outside the area before the 20th minute to show that despite the territorial dominance of the premises, Vélez could bring danger to the rival area and be excited about leveling the series. 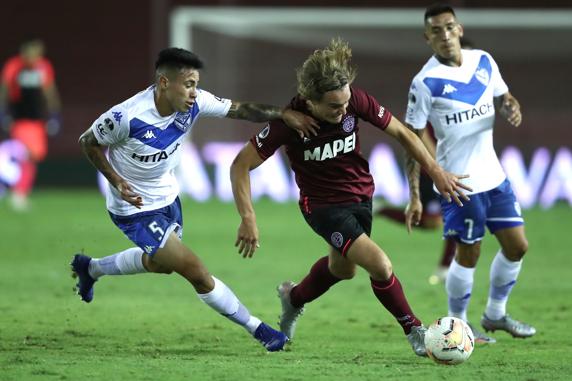 The visit maintained the intensity and through Cristian Tarragona, Pablo Galdames and the leadership of Ricardo Centurión he was close to opening the score, but the lack of aim conspired against this objective.

Matías Pérez in minute 35 had the first for Lanús with a header that was cleared by Miguel Brizuela.

In minute 40 came the first warning from Cristian Tarragona who, four minutes later, saw the red by referee Wilton Sampaio after a foul on Lautaro Acosta.

Just before halftime, Lanús took advantage of this moment and opened the scoreboard at the exit of a corner kick that José Sand anticipated to leave Tomás Belmonte alone to connect to the network.

With this advantage, Lanús started the second half calm and in the 60th minute after a projection from side Brian Aguirre a low center arrived that found an advance from Pedro De la Vega for Nicolás Orsini to convert.

Lanús had more options to increase and Vélez, despite having one less player, was very proud of the discount.

But in the 88th minute Alexandro Bernabei started a counterattack and served a pass to José Sand, who then gave up a perfect cross on the wall for the winger’s goal-scoring arrival.

For Vélez Sarsfield the consolation will be to define the Complementation Cup of the local tournament next Saturday.