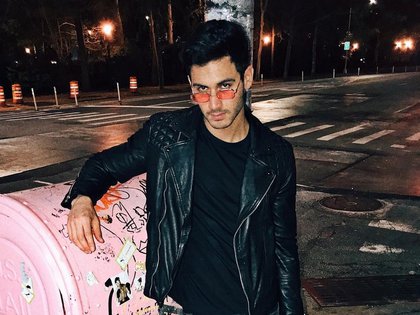 Following his recent work on popular projects such as Dark Wish, The Club, and Someone Must Die, Mexican Alejandro Speitzer has positioned himself as one of the figures on the national scene who promises to catapult his career to great levels, because not a few people have acclaimed his work and his fame has been increased in various countries, thanks to the projection of his image on digital content platforms.

Now the young man, who began his career as a child in melodramas of the Televisa company, surprised the public by appearing on the cover of the magazine Bad man wearing a pink dress and long gloves, which caused the commotion of the public, who placed his name in the markers of social networks on Tuesday night.

The publication directed by Juan Pablo Jim decided let go of gender labels and stereotypes to produce a cover where the boyfriend of the Spanish actress Ester Expósito appears dressed in a wardrobe considered feminine; however, it was specified that what is being sought is precisely “remove tags”. 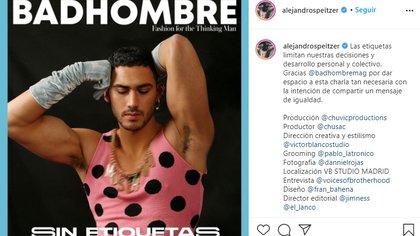 The actor thanked the publication for being able to contribute to the fight against stereotypes in society (Photo: Screenshot)

The actor shared the result of his photo shooting on his Instagram account, writing at the bottom: “Labels limit our decisions and personal and collective development. Thank you Bad man for giving space to this much-needed talk with the intention of sharing a message of equality”, Generating multiple comments instantly.

Speitzer thanked the magazine for giving him that space and being able to share a message of equity, a spirit shared by the publication that is characterized by its fashion editorial sessions and its intention to demystify gender roles.

On the cover image The actor is seen wearing velvet gloves, earrings and a pink dress with black circles, an outfit considered feminine and high-end with which Speitzer questioned why clothing should define a gender identity, since in the end the garments are a tool of expression of each person, especially when stereotypes of this type end up limiting. 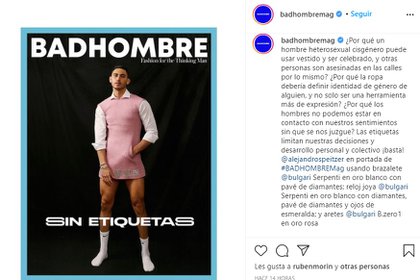 The publication of the photographs raised controversy, as there were multiple voices who assured that using the actor as a model “does not have anything disruptive” (Photo: Screenshot)

“Why can a heterosexual and cisgender man wear a dress and be celebrated, and other people are killed in the streets for the same?Why should clothing define someone’s gender identity, and not just be another tool of expression? Why can’t men be in touch with our feelings without being judged? Labels limit our decisions and personal and collective development, enough! ”, Reads the presentation of the magazine edition where Speitzer poses wearing a Bvlgari bracelet in white gold.

The actor’s publication was celebrated by his girlfriend Ester Expósito, who commented on a heart; the director who accompanied him in the serial Someone has to die, Manolo Caro, also replied with emoticons, and his partner Maite Perroni wrote “Oleeee, I loved it.” 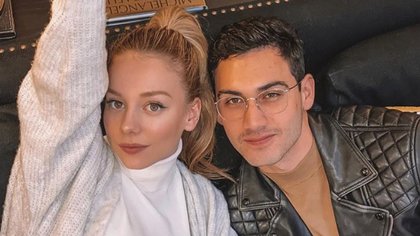 Despite the fact that they have been seen together and loving, neither Alejandro Speitzer nor Ester Exposito have spoken openly about the relationship they have (Photo: Instagram: @alejandrospeitzer)

But no it was all praise and positive messages to the post, because not a few people considered that when choosing the actor to represent a fight against the impositions of gender when dressing, the magazine would be sending a contradictory message, because they considered that in the end Speitzer is nothing but “a privileged man” who falls within the established canons of beauty and not really a person queer who have experienced the problem firsthand.

“Using a hot straight guy in a short dress on and putting him on the cover is NOT fighting for misuse of labels. This guy does not represent a teenager who has been beaten or insulted in the hallways of his institute or in his neighborhood for wanting to wear a skirt. This is continuing to romanticize a problem, “wrote a user who added a large number of likes in the comment box of the publication.